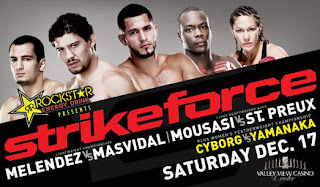 Doctor Law: Gilbert Melendez is one of the best lightweights in the world. There is no denying that. Sadly, he’s stuck in Strikeforce. It's mostly his fault…signing a 6 fight extension in February was a bad call. Masvidal is a very good lightweight and is the last legitimate challenger Gilbert has in Strikeforce. He earned this shot by beating the absolute crap out of KJ Noons. Melendez is a different animal though. He’s better than Masvidal everywhere and that will be obvious fairly quickly. Melendez by 2nd Round TKO

Kid Presentable: Gilbert faces the last credible opponent Strikeforce really has to offer him, and the guy isn't really near the top 10 as is. Game Bred is a tough fight regardless, having gone to decision at welterweight with Paul Daley and straight handling KJ Noons. Plus, his video fight training video of just playing Call of Duty and eating brownies and ice cream is MMAzing. Eh? Eh? Get it? Gilbert should take this though, provided he doesn't lose focus looking over the fence at the UFC's greener pasture. Melendez by decision.

DJ Mark with a “K”: Melendez is a beast. He's one of the few top ten fighters not fighting in the UFC and has pretty much cleaned out his division in Strikeforce. He's also one of the most exciting fighters in MMA, he attacks with a non-stop pace and is always looking to finish his opponents. Jorge on the other hand is a very technical striker that is extremely tough. He's also freaking hilarious, as seen in the web series "Miami Hustle." He eats brownies and ice cream for breakfast and plays Call of Duty all day long. However, Killstreaks don't transfer over to the cage and I see Gilbert winning by 2nd Round TKO via GnP.

Lavender Gooms: This is just unfair to Gilbert. He should be fighting a top ten lightweight in the UFC already. When is Zuffa going stop this farce and just shut down Strikeforce? These two organizations are under the same umbrella, the best fighters should be in the UFC. No disrespect to Masvidal, but there is no way he beats Melendez. I would much rather see Melendez fighting Maynard or Edgar. But we play with the crappy hand we’re dealt. This fight won’t be close. Melendez by decision.

Doctor Law: Cyborg Santos is going to beat this lady up. I don’t know anything about Yamanaka and it doesn’t matter. It’s going to be ugly. Cyborg by 1st Round TKO

Kid Presentable: The rule goes for Japanese mens fighters that they don't win in the states. So I am going to extrapolate that to the women as well. Hiatus or not, Cyborg is going to go H.A.M. on Yamanaka. This makes me wish I went to see Watch the Throne at the H.P. Pavilion last night. Cyborg by Beast Mode.

DJ Mark with a “K”: The 145 lb women’s division is easily the weakest in all of MMA. There is just too few top caliber fighters at this weight and Cyborg has beat them all already (outside of new prospect Ronda Rousey). It's hard not to feel bad for both fighters in this fight. For Cyborg, she is constantly being matched up with girls that have no business being in the same cage as her and for this poor Japanese woman, she's basically being sent to lion’s den, after being shot, stabbed and poisoned. Cyborg by 1st Round TKO.

Lavender Gooms: Cyborg Santos is the best female fighter in MMA. She puts the hurt on ladies and she genuinely frightens me. Yamanaka is going to get destroyed. Cyborg by 2nd Round TKO.

Doctor Law: In the weeks leading up to a Gegard Mousasi fight, Kid Presentable and I say the same thing to each other at least 3-4 times: “I don’t buy this Mousasi bullshit.” Don’t get me wrong, Mousasi is a good fighter, but no one should be under the illusion that he’s top 10. He has a MASSIVE hole in his game: wrestling. Lucky for him, OVP likes to stand in his fights. Then again, we thought the same about Keith Jardine and he turned into Jon Fitch during his fight with the Dreamcatcher (that’s right…Dreamcatcher). Here’s hoping Mousasi can avoid getting taken down long enough to finish the former Tennessee Volunteer. Mousasi by 2nd Round TKO

Kid Presentable: I never know what to make of Mousasi. I want to believe he is a legit prospect, then he has moments that just make you scratch his head. The fact that he waved the white flag essentially at the second round of his title fight with King Mo and that for being a renowned striker, could not KO Keith "Just wave a left a hook at me and I'm out" Jardine, keeps me from ever going all-in with this guy. However, I still think he takes this from OSP, who while a solid prospect in his own right, doesn't really possess the grappling credentials to get the win here. Mousasi by 3rd Round TKO.

DJ Mark with a “K”: On paper Mousasi is a solid favorite in this fight. He has a world of experience over OSP and has faced and beaten some of the best in the world. However, since losing to King Mo, a giant hole in his game has been exposed. Mousasi's takedown defense has been his downfall and cost him a W over UFC veteran Keith Jardine when he decided to try out his new takedown defense technique: "Hold onto the cage for dear life". If OSP can get him down, there's a possibility that he grinds out a three rounder for the upset. While it's possible I don't know how likely it is. Mousasi by 2nd Round Submission.

Lavender Gooms: Mousasi wins by TKO. I’m thinking in the first. That’s all I need to say. Mousasi by TKO in 1st round.

Doctor Law: I really don’t care about this fight. Quite frankly, this card barely matters past the main event. Strikeforce hasn’t put on a major show since September and they come back with this? Instead of this fight, I’m gonna talk about the Nate Diaz/Donald Cerrone fight happening in 2 weeks. It’s going to be awesome, simple as that. Check out the video on the right where they discuss their feelings for each other. Oh, and KJ by Decision.

Kid Presentable: KJ Noons, sure. Don't care. Hopefully KJ's hair is trimmed. Instead I am going to tell you you should watch the trailers to the movie Chronicle, and to the game The Last of Us. That ish looks bad ass and has piqued my interest. This fight has not. KJ Noons by 2nd Round TKO.

DJ Mark with a “K”: Both guys are coming off loses to Jorge Masvidal, but a win here can put them in contender position. While I think Evangelista is a little bit better all round, I think this fight is going to stay on its feet and that gives Noons the advantage. I see Noons getting the better of Evangelista on the feet and I think Evangelista will have trouble getting him down to the mat. Noons by Decision.

Lavender Gooms: I have pinpointed why Noons has hit a rough patch: his hair. When he cut his luxurious, Pert Plus hair, he started losing. Not having to move his hair out of his face every 5 seconds has thrown him off his game (it’s like a modern day Samson losing his hair). This should probably be the only close fight in a main card full of likely blowouts. Noons wins a close decision, with Delilah cheering from the rafters (that’s another Samson joke in case you’re wondering). Noons by decision.