It's MMAzing Staff Predictions for UFC 140 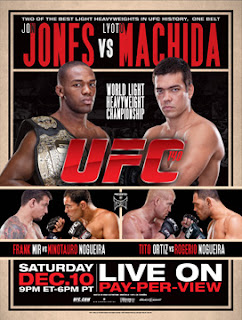 Doctor Law: Jon Jones is an absolute monster. He isn’t the future…he’s the present. I think he’s going to be light heavyweight champion for a very long time. When he first won the belt, I thought only two people could give him any problems: Rampage and Machida. Rampage’s path to victory was landing a big shot…and we saw how that worked out. Machida needs to play the distance game like he never has before, but Jones has like a 11 foot reach. Bones is going to grab Machida, throw him on his back and elbow the crap out of him. Jones by 3rd Round TKO.

Kid Presentable: We have a match-up of the two eras meant to reign over the light-heavyweight division according to Joe Rogan. One is the era in progress, while the other is the one that never was. I actually think the Karate Kid matches up the best with Jones of any of the existing challengers. He fights very well at range using his kicks and movement, and historically has been one of the most difficult fighters to take down. That said, Jon Jones is the Juggernaut bitch, and I don't see his freight train getting derailed now. Say what you will about the guy's personality, inside that cage he is a monster. I don't think it will be nearly as one-sided as Jones' recent fights have been, and that Machida will have his moments, but like all the others, the Dragon will fall, leading up to my most anticipated moment of the evening...when Rashad Evans ruins Jon Jones' special night for a third time. Jones by 3rd Round TKO.

DJ Mark with a "K": While it may be near impossible to like Jon Jones as a person, you have to admire him as a fighter. In a really short amount of time Jones went from promising prospect to a seemingly unstoppable machine. He has yet to face an opponent that provided any type of challenge to him, but Machida might be able to do just that. It wasn't all that long ago when people thought Machida was unstoppable. The difference between the two was that people started to figure out ways to beat Machida, either by bum rushing him guns ablaze (aka Shogun) or by closing the distance and controlling the fight (a la boring Rampage). No one can figure out a way to stop Jones and I don't think Machida has the answer. Jones by 3rd Round TKO.

Lavender Gooms: This match-up of contrasting styles promises to be a good one. “The anointed one” aka Jon Jones just completely ran through Shogun and Rampage, making them look like also-rans in the division. Jones is an unpredictable freak of nature and he grows as a martial artist every time we see him in the octagon. However, Machida’s fighting style, along with the fact he routinely spars with a guy who Jones took the blueprint from (a guy by the name of Anderson Silva) means that he is more equipped than most other fighters to deal with any strange or unpredictable angles which Jones will come at him from. Even so, the reach of Jones will be enough to overcome the distance game Machida likes to fight. Fight ends with elbows to Machida’s grill. Jones by 3rd Round TKO.

Doctor Law: A lot of people don’t like Frank Mir, but it’s hard to dispute his talents. Fantastic BJJ and an ever improving stand up game. Big Nog, on the other hand, is absolutely loved. He’s a legend and his ability to take punishment and keep going is stuff of legend. Sadly, it’s clear that the years of taking abuse have taken their toll on Minotauro. The man looks like he is 70 years old. It was awesome seeing him beat Brendan Schaub when no one gave him a shot, but I don’t see this fight going his way. Mir by 3rd Round TKO.

Kid Presentable: Few people were as ecstatic as I was when Big Nog KO'd Brendan Schaub. I believe I literally did a victory lap around the living room yelling with glee. However, I don't see this fight being all that different from the first. Sure Nog may have had a staph infection, but like Mir said, that's not what caused him to leave his chin up the whole fight. Big Nog isn't finished yet, but at this point Mir should class him. Mir by 2nd Round TKO.

DJ Mark with a "K": This is a tough one for me. I really don't have much faith in Mir and I kind of want to pick Big Nog since he has so much momentum right now. However, their first fight just sticks in my head. I want to say Big Nog can out strike him, but again the first fight comes to mind again. I want to say maybe if it hits the mat Nog can... but when's the last time Nog subbed someone? I'm going with Mir by Decision.

Lavender Gooms: Rematch fight right here folks. Both of these fighters are high level BJJ practitioners so hopefully we’re in store for a highly technical ground match. Most likely the fight will stay on the feet where I think Mir has the advantage. Sadly, Big Nog’s best days are behind him. Mir beat him before, he’ll beat him again. Mir by 2nd Round TKO.

Doctor Law: “The Huntington Beach Bad Boy” is now the “The People’s Champ.” We all know there is only one People’s Champ and that’s the Rock. (Actually…Muhammad Ali was, is and always will be the People’s Champ). Anyways, this should be a fun battle between two MMA veterans. Lil Nog brings a good boxing and BJJ to the table while Tito brings his adequate stand up game along with his fantastic ground and pound. I think it’ll be a close fight, but I got Tito getting the judges’ nod. Ortiz by Decision.

Kid Presentable: Like Big Nog over Schaub, seeing Tito do the gravedigger routine after his win over Ryan Bader was a joyous moment of nostalgia. Then of course he got Tiger Knee'd in the heart by Rashad and you remembered where he is at in his career these days. Lil Nog hasn't had much recent success against wrestlers lately, but he should have all the tools to make this a long night for Tito. I look for Lil Nog to keep this standing and ultimately pick apart Ortiz with his superior boxing. Lil Nog by Decision.

DJ Mark with a "K": This has been a fight in the making for awhile. Much like the Mir v Big Nog fight I'm at a bit of a cross roads here. On one hand Ortiz hasn't been able to be consistent for years now. If he didn't beat Bader we'd probably be talking about Lil Nog v Franklin or something. However, Lil Nog has also left much to be desired dropping a handful of fights and sometimes barely getting the W in others. I think Lil Nog is the smart choice here and I think he'll pull it off but sometimes you just have to go with the underdog. Ortiz by Decision.

Lavender Gooms: Tito Ortiz would be enjoying his retirement from the UFC if not for Ryan Bader jumping into his fist. Even so, he has enjoyed resurgence in his last two fights, even getting into Dana’s good graces by taking the Evans fight on short notice. Much like his twin, Little Nog has good stand up and BJJ. However, Ortiz’s bread and butter (along with being Little Nog’s Achilles Heel) is wrestling. I see Ortiz taking Little Nog to the ground for three rounds and punching him in the face. Ortiz by Decision.

Doctor Law: I have been very impressed with Ebersole. Beyond the cartwheel kick and the Hairrow, the man has showed a good all around game. Claude Patrick is stepping in for an injured Rory MacDonald. While Patrick has looked solid so far in the UFC, I think he’s in over his head against this veteran over 60 fights. Ebersole by 2nd Round TKO.

Kid Presentable: It's the return of the Hairrow! Coming off his destruction of the human man-thong Dennis Hallman, Ebersole meets Claude Patrick. Despite having a very impressive record of 14-1 there doesn't seem to much about Patrick to get excited about, and I see him being a career mid-level guy. Ebersole has been very impressive in his UFC run so far, and I look for him to get a finish. Ebersole by 2nd Round TKO.

DJ Mark with a "K": I’ve been impressed with Ebersole since he started his run in the UFC. He’s beaten two decent UFC vets and I feel like his ground game will allow him to pick up another victory her. Claude has some talent and holds a good record but the lack of big name wins stops me from giving him a real good shot against a long time veteran like Ebersole. Ebersole by 2nd Round Submission.

Lavender Gooms: Ebersole is vastly more experienced and better rounded in every aspect than Patrick. He has shown an ability to submit and knockout power in the past. With his wrestling ability , he’ll be choking or cranking something at some time during this fight. Ebersole by 3rd Round Submission.

Doctor Law: The Korean Zombie is the man, simple as that. Between his brawl with Leonard Garcia in their first fight and his use of Eddie Bravo’s Twister in the second matchup, Jung has become a cult hero in MMA. Unfortunately for him, he’s taking on a man who actually uses crisp technique when he strikes. I think the Zombie tries to turn this in a brawl and will get picked apart of the former FW title contender. Also, remember when there was a GIANT hematoma on Hominick’s head…that was really nasty. Hominick by Decision.

Kid Presentable: Few love the Korean Zombie more than I do, but this is a terrible match up for him. Hominick has amazingly good technical striking and could give Zombie fits standing. Though Hominick's big weakness does tend to be grapplers as he has dropped many of his fights to submission. Video floating around the web of Zombie and Benson Henderson grappling gives me some hope that Zombie will take that avenue to victory rather than stand, but I am afraid Hominick will class him most of the fight on the feet. This is another fight where I would love to be wrong though. I may be picking Mark, but WAR Korean Zombie. Hominick by Decision

DJ Mark with a "K": This should be an awesome stand up war. Both guys like to keep the fight standing and I expect some fireworks in this one. I’m giving the edge to Hominick since his stand up is a bit more technical and crisp where Jung is more like a controlled brawler. If the fight hits the mat Hominick has to be careful, since Jung has the only twister win in MMA. His submissions are clearly something to be extremely wary of. Hominick by Decision.

Lavender Gooms: One thing you’ll never hear after a “Korean Zombie” fight: “Man that was boring.” Jung showed a sick submission game with his twister against Garcia, along with power and an ability to take a boatload of punches. However, Hominick made Aldo look mortal in his last fight, which is a feat in itself. Technically, Hominick’s stand up is more advanced. He also possesses better speed and power. This will be an early night for the Korean Zombie. Hominick by 3rd Round TKO.