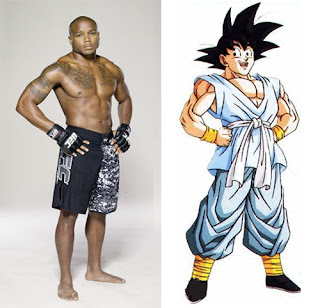 "Quinton Jackson and Dragon Ball Z are the reason I do mixed martial arts. Dragon Ball Z is the greatest action anime of all time. You got all these little kids talking about Naruto. Man, f*** Naruto."

Before someone fights on The Ultimate Fighter, Spike TV always airs a couple minutes focusing on that fighter. Normally the fighter takes that time to discuss the trials and tribulations that led to him becoming a  fighter. Marcus Brimage, as you can see above, is not normal. The man chose to talk about his (and my) favorite MMA fighter and defend his favorite cartoon. Though he came up short against WEC veteran Bryan Carway, Brimage's comments remained one of the most memorable parts of the season.

Fast forward 3 months to the TUF 14 Finale. While Marcus came up short in the competition, he was invited to fight on the finale against fellow contestant Stephen Bass. Brimage showed that he had put some serious time in the gym and took a hard fought decision over Bass. Later on that evening, MMAFighting.com's Ariel Helwani interviewed Brimage about his first UFC win and his hero, Rampage Jackson showed up. This is where it gets awesome. Analysis of the interview after the jump. (Note that it's a 12 minute video...trust me, it's worth it)

Simply put, Marcus Brimage is awesome. In addition to winning his first UFC fight, Marcus has taken Nick Diaz's title for giving Ariel Helwani his greatest interview. (To see the former #1 interview, search YouTube for "Nick Diaz Ariel Helwani slap.") He is clearly still growing as a martial artist, but in terms of charisma, Marcus is miles ahead of many of his peers. With the lighter weight classes still trying to find their footing in the UFC, Brimage can become a big star if he continue to hone his skills. Who knows, maybe he can even convince thousands of MMA fans to check out DBZ on Blu-ray.
By Doctor Law