The gang discusses the results and depressing ending of UFC Fight Night: Holloway v. Oliveira. They discuss Max Holloway's future in the division in addition to Neil Magny's big win over Erick Silva. The gang also talks about the barnburner between Patrick Cote and Josh Burkman. Doctor Law and Lavender Gooms take the time then to gloat about their correct predictions in the Moroz/Letourneau fight. The gang then discusses the slew of big matchups announced by the UFC. At some point they veer into a discussion about who is the most handsome UFC fighter. All that and another edition of "Stuff We Like." 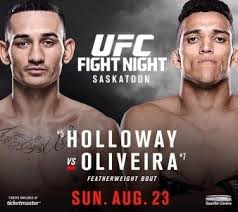 After a whole week off the UFC is back baby!  Love a fight card on a Sunday that begins at 9pm eastern time.  They are trying to have me not watch this card.  It's times like this I really hate my compatriots on the left coast.  This card(and every other card) always starts at a sensible 6 or 7pm pacific time which allows them still to have an evening after the event is over.  I'm just bitter
More after the jump
By Lavender Gooms 0 comments


The gang has a show where they just go off the rails. As Doctor Law said during the show, this will be either your favorite or least favorite episode of It's MMAzing Radio. The guys ramble about Anderson Silva, Lavender Gooms's birthday, canine menstruation (seriously), feminism, and Jacare v. Romero. Things got weird folks. They also preview this Sunday's UFC Fight Night: Holloway v. Oliveira event. All that and another edition of "Stuff We Like."


The gang starts off the show talking about Ronda Rousey (they're just trolling for hits at this point), but quickly move on to a discussion about this past weekend's UFC Fight Night: Teixeira v. Saint Preux fight card. They discuss Glover's huge win and discuss the various holes that still exist in OSP's game. The gang also discusses the terrible decision in the Dariush v. Johnson fight and also talk about Amanda Nunes's gigantic win over Sara McMann. They discuss the rest of the card too, but they, like all of you, are a bit burned out on MMA. Instead they give you a super-sized edition of "Stuff We Like." 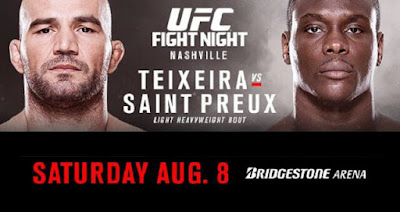 UFC is heading back to Nashville Tennessee where native son Ovince Saint Preux takes on former light heavyweight challenger Glover Teixeira. In addition we'll also see an intriguing match up between Michael Johnson and Beneil Dariush, as well as podcast favorite Sam Alvey returns with a big smile and probably some ad tanned onto his body. Lots to break down so why waste time and let's just get right to it.


The gang talks about Ronda Rousey (shocker). They discuss Ms. Rousey's sheer dominance of Bethe Correia at UFC 190. The gang also discusses the fact that Rousey has managed to become one of the biggest stars in all sports. They also discuss her future challengers victims, including Miesha Tate and Cyborg Justino. They also discuss the rest of the UFC 190 card. The gang also talks about what needs to be done with Rousimar Palhares. They then preview UFC Fight Night: OSP v. Teixeira. All that and another edition of "Stuff We Like."