The gang finally gets the chance to address the Conor McGregor situation. They go back on forth on fighters' rights, Conor's position, the UFC's position and what they expect to be the outcome of the conflict. The gang next discusses the results of UFC 197. They break down Jones and DJ's big wins along with Edson Barboza's performance against Anthony Pettis. The gang then pays tribute to Prince before a very HBO-centric of "Stuff We Like."

Let April 23rd be known as the return. Jon Jones, the last vestige of pure greatness in the MMA landscape, returns from his indefinite suspension due to his well documented legal and criminal battles. Think about it. In the time Jones was away, the sport saw Conor choked out by Nate, Aldo flatlined by Conor, Ronda head-kicked into oblivion by Holms, who herself would go out to Miesha's choke. Anderson's tumble would continue against Bisping, and even the spider killer himself, Chris Weidman would drop his belt to Luke Rockhold. With the exception of the other champion in the co-main event slot, Mighty Mouse, our picture of the invincibles in the UFC have dropped like flies.  With all due respect to one Mr. OSP, the world awaits what Jon Jones brings to the table in his return.
More after the jump
By Kid Presentable 0 comments


The gang comes together to talk about the results of UFC Fight Night: Teixeira v. Evans and where the think Rashad Evans goes from here after his tough loss to Teixeira. They also talk about the rest of the card including Rose Namajunas's big win over Tecia Torres. The gang then talks about Machida's drug test failure along with the latest GSP and Rousey rumors. They then preview and give their predictions for UFC 197: Jon Jones is Coming to Whoop Everybody, I mean Jones v. St. Preux. All that and another edition of "Stuff We Like." 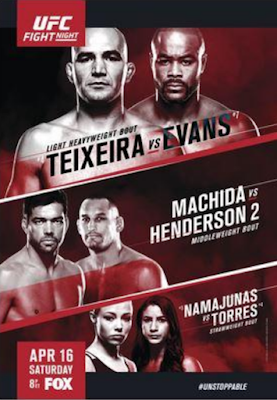 The UFC returns to Florda and this time they're in Tampa for some reason. Seriously...Tampa. Are they worried they wouldn't be able to go Miami without having Kimbo Slice on the card? Let me give you a recap of the disastrous lead up to this fight card. The main event was killed by Tony Ferguson having blood in his lungs. The guy replacing Tony Ferguson has to cut 21 pounds in 9 days and has never fought in the UFC before. The previous co-main event of Shogun Rua v. Rashad Evans was destroyed by Shogun managing to hurt his knee for about the 30th time.   The event lost Dan Henderson v. Lyoto Machida because Machida admitted to being on PEDs.  Oh well...we still have Rose Namajunas on the card. I am willing to watch Thug Rose fight absolutely anybody. Check out our predictions below. Also, look at the standings because I'm straight dominating. The game answers to me now.


The gang, well, is down to two this week as Doctor Law and Kid Presentable hold down the fort. They talk about the results of UFC Fight Night: Dos Santos v. Rothwell and basically gush over JDS's performance in his victory over Big Ben. They also talk about Derrick Lewis taking out Gabriel Gonzaga and the rest of the results from the UFC's first fight card in Zagreb. The gang next talks about the additions to UFC 200, specifically Miesha Tate v. Amanda Nunes, and Frank Mir's positive drug test. They then preview UFC on Fox: Teixeira v. Evans. All that and another edition of "Stuff We Like." 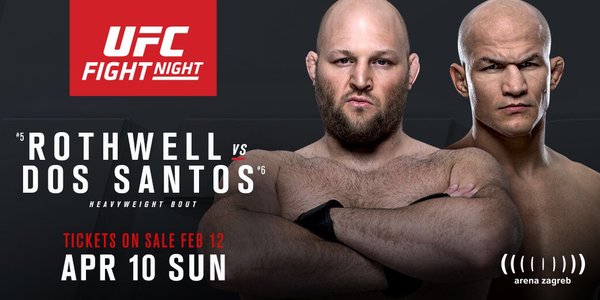 I'm still so angry from the nonsense the other three fools said during the last podcast.  Not about anything MMA related,  but from the fact they revealed they can't be trusted when it comes to their super hero movie tastes.  The fact they did not agree with me that "Batman vs. Superman; Dawn of Justice"  wasn't the hottest of gaaabage (that's right gaabage, not garbage...garbage would be too good for it).  I may or may not air some more of my grievances I didn't get to in my long rant on the last show so be forewarned in case you haven't seen that travesty of a movie.  But you aren't reading this blog to hear me complain about my loss of respect for my fellow bloggers.  This Saturday features four heavyweights we know pretty well and the rest of the card consists of virtual unknowns.  I've had to go back and actually find the fight pass prelim fights or fights on YouTube to know what the hell I'm talking about with these guys.  That is what you get from a card in Eastern Europe that's airing in the early afternoon on a Sunday.


More after the jump
By Lavender Gooms 1 comments


The gang really messed up in this one folks. You read it right...1 hour and 45 minutes. "What did they talk about for that long," you asked (probably). It certainly wasn't only MMA. The gang breaks down the nutty week that was Jon Jones & Daniel Cormier. They talk about OSP replacing Cormier at UFC 197 and all the Jon Jones in jail drama. The gang next breaks down the UFC 200 card (so far) before doing an absolutely miserable job previewing UFC Fight Night: Rothwell v. Dos Santos. They next talk about Wrestlemania because why the hell not?! They follow that up with a very impassioned and looooooong debate about Batman v. Superman in super sized (not on purpose, I swear) edition of "Stuff We Like."