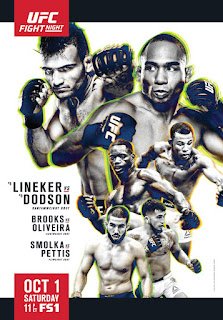 I honestly meant it when I said on the podcast that I am more excited for this fight than any fight on UFC 205. That was before McGregor v. Alvarez became official. Even with that news, I think I'm still more excited for this fight. At this point you guys know that I'm all about watching the little guys fight. Add on to that that these two gentleman have dynamite in their fists. Between the two of them they have been in 60 fights and neither has ever been knocked out. That sh*t is going to change on Saturday. I don't see how this thing goes 5 rounds. (I for sure just jinxed it). Dodson is coming off a bantamweight debut where he dusted Manny Gamburyan in 37 seconds while Lineker's last fight had him sending Michael McDonald to the land of wind and ghosts in half a round. They're both very capable of winning this fight and it's a bit strange that we all lined up on the same side of this one. I simply think that Dodson is a more diverse striker and has better movement than Lineker. That being said, if Dodson just stands in front of Lineker, he will have a very bad time. I think Dodson uses his speed and angles to get it done. Dodson by 1st round KO.

Picking Dodson: All of us
Picking Lineker:


More after the jump
By Doctor Law 0 comments


The gang celebrates the departure of one of their own as Lavender Gooms appears in his final episode before taking off for glorious Nippon for an entire year. The gang talks about UFC Fight Night: Cyborg v. Lansberg and wonder if there was any point to it. They also discuss UFC 205 and demand a certain individual in the main event. The gang the predicts UFC Fight Night: Dodson v. Lineker. All that and a very Lavender Gooms-ish edition of "Stuff We Like." 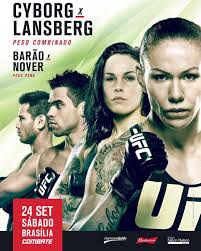 Brasil!!!!! We go to the Brasilia, Brazil this week to watch fights that largely won't have a large impact on any of the rankings.  At least we get to watch Cyborg commit murder in the octagon.


The gang talks about Chael Sonnen's big move to Bellator MMA. They then discuss the results of UFC Fight Night: Poirer v. Johnson and discuss where the winners go from here. They then discuss Al Iaquinta's very reasonable gripes with the UFC and how the UFC fails to understand that they need fighters to not lose money working for them. The gang then previews UFC Fight Night: Cyborg v. Lansberg. All that and another edition of "Stuff We Like." 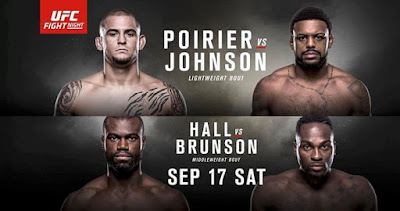 After the circus that was UFC 203 and coming off our 200th podcast I feel like our readers deserve the truth. The truth is this card really isn't all that great. We have a decent main/co main event but the rest of the card is mostly filler. Still we press on and continue to break down every UFC card because even when a card is weak, MMA is still amazing. Like mentioned before, the main event between Dustin Poirier and Michael Johnson is a interesting fight that has some ramifications within the lightweight division and the co main event between Uriah Hall and Derek Brunson is an intriguing match up between two fighters with conflicting styles. The rest of the card showcase some mid range fighters the likes of Evan Dunham, Roan Carneiro and Kenny Robertson.


The gang comes together to celebrate Episode 200. Do you hear that? Episode 200! You're standing, right? The gang talks about CM Punk for a while because we all that was the real main event of UFC 203. They talk about his defeat at the hands of Mickey Gall and try to explain basic economics. They also discuss Stipe Miocic's big win over Alistair Overeem and the rest of the UFC 203 card. The gang then previews UFC Fight Night: Poirer v. Johnson and make their predictions. All that and a very special 200th episode edition of "Stuff We Like." This time last year, Cleveland had no championships, and I was enjoying my little sports bubble of the Warriors having broken their own drought of victory. Then one day in a soccer stadium in Brazil, we saw a man with a look of pure shock and adulation amongst a sea of people quiet as the vacuum of space standing there saying to himself: "I'm the champion? I'm the champion!!" Can't be anything but happy to see Stipe to be the man who broke the Cleveland Curse. Now he faces Alistair Overeem, a man who was meant to be a contender from the start, but whose own road had many detours along the way. Fabricio Werdum also returns since dropping the belt hoping to hop right back into title contention with a win. A legend of the little guys hopes to add to his legacy, and two ladies who always bring the fight come to scrap. But let me be real and honest for a moment, I know he is a polarizing figure, but I am here for CM Punk. He was the lone wrestler that made me pay attention in an era of me totally not caring about pro wrestling at all. I like his story. I like what he fights for. Most of the time I try to not make it personal with my picks, but this one is all personal. I'm with CM Punk. #BestInTheWorld

As I begin to write this, we're kicking things off with one of the more surprisingly difficult fights to call on the card. The nature of heavyweight is just that anyone can be victorious at just about any given time. Even the surprise upsets don't really feel like that big of a surprise. We've all talked about the running "home field disadvantage" that has shown up that we hope continues on. Besides that notion, you also have to give credit to Reem himself for truly evolving his game. He fights more controlled and as a result has gassed out far less. Jackson/Winklejohn have worked wonders with actually giving Reem a plan of attack. On the other hand you have Stipe who I may have unfairly labeled as a "poor man's Cain." Stipe did to Werdum what Cain couldn't so I cannot deny the hand speed and power of that man. I was leaning Reem at the start of all this, but Mike already being on board with Marc who I knew will always roll with Reem, I'm starting to hedge my bets and lean #andSTILL. It helps that CM Punk seems to be buddies with Stipe. Miocic by KO round 1.

Yup, there is definitely a UFC card this weekend. As we continue our tour of the never-ending UFC cards, we find ourselves in Hamburg, Germany. Admittedly, as not hyped about this card as I was going into this week (college football is back after all... GO DUCKS!), there is actually some solid name value on the main card. Headlining the card are two long-tenured heavyweights that have some how managed to never previously cross paths. Additionally, two top 10 light-heavyweights staples hope to get their careers back on track in a race to who can get a title shot first. Will it be perpetual bridesmaid, but never the bride, Alexander Gustafsson or the man that no one felt like giving a title shot at all, Ryan Bader. Rounding out the main card is a UFC career 50/50 fighter taking on a German fighter to appease the locals. To the picks! (Spoiler alert: not a lot of variety, therefore lots of WRONG picks incoming)


Andrei Arlovski vs Josh Barnett
Two illustrious heavyweight careers and somehow this is NOT a rematch, trilogy, or in Andrei's case, a Sylvialogy. In most cases you'd be right in saying two men at this stages of their career that the matchup might be past its expiration date, but age seldom seems to be a factor in this division. It should be a fun one. When Arlovski goes boring, it's usually due to a methodical point kickboxing style. I just can't see Barnett allowing that to happen. Barnett is no stranger to making it dirty in the clinch, and if he can get Andrei to the ground, it could be a short night of work. Andrei at his best though will always be capable of stopping another man cold. It could play out as your classic clash of styles, but ultimately I think Barnett just has more avenues to victory. No slouch with his hands himself, I see Barnett wading through Andrei's strikes until he can eventually drag him to the mat. Catch wrestling wins the day. Barnett by arm-triangle round 1.