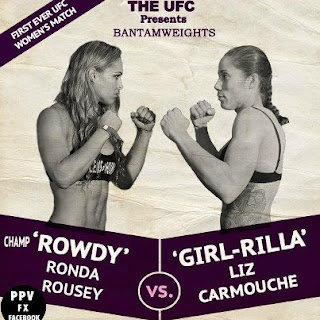 On Saturday we will all be witnesses to history. On Saturday we will see three firsts in the UFC. The first women in the UFC, the first UFC women's championship bout AND the first women headlining a UFC card. That is a lot of firsts. Unofficially this fight is being called "Ronda at the Honda" but I think this is an apt description. Although this card is stacked from head to toe, all the attention will be on the blonde judoka specialist with the unstoppable armbar that's taken the MMA world by storm in the last two years. Whether they love Ronda or think women have no place in fighting, all eyes will be trained on these two women when they make history this weekend.

The gang uses this super-sized episode to talk about the results of UFC 156 and discuss Anthony Pettis as a featherweight #1 contender. They also talk about Alexander "Ivan Drago" Shlemenko and Uriah Hall's murderous KO of Adam Cella on TUF. Finally, they gang breaks down the upcoming UFC on Fuel TV: Barao v. McDonald card and the historic UFC 157: Rousey v. Carmouche card.

Kid Presentable: Vitor got a title shot in a division where he had no relevance, and now Chael Sonnen is getting one too. Frankie is coming off of two losses and is entering a new weight class yet I have no problems with this title shot. It has been fairly common knowledge that Frankie could easily drop down in weight and this is without doubt the greatest threat to Aldo's reign atop the division. Frankie has all the tools to make the night long and difficult for Aldo. Frankie is fast, sets up his takedowns really well, and has an endless gas tank. Essentially he is everything Urijah Faber was supposed to be in his fight against Aldo. The problem though is that for all of Frankie's movement he still has a propensity for getting hit. Hard. And often. Even in the second match against Bendo, just because Frankie caught all those leg kicks, doesn't mean that he wasn't just eating them the whole time. Frankie may have gone down in weight, but he hasn't fought anyone that hits like Aldo. Aldo by TKO round 2.

Doctor Law: The Superfight is finally here. Current featherweight champion versus the former lightweight champion. It may not be champion versus champion, but it’s still pretty great. I think this is a tough fight to pick. There are so many factors to consider. How will Aldo deal with Frankie’s movement? How will Frankie deal with Aldo’s leg kicks? How will the weight cut affect Frankie? Will Aldo’s time off affect his gas tank? Will Aldo’s decision to stupidly pick the Ravens over the 49ers cause us to question his value as a human being? I keep going back and forth on this fight. Ultimately, I do think Frankie will win the championship rounds due to his cardio, but I think it’ll be too late after Aldo wins the first 3 rounds. Aldo by decision.

DJ Marc with a "K": This is a really tough fight to pick. It’s always hard to judge how a fighter will perform when going to a new weight division. The cut to 145 seems like it’ll be an easy one which is very good because Frankie isn’t wasting any time in the Featherweight division. Aldo at times has seemed as skilled and talented as any of the other UFC champions but he’s also had a few moments where you might question some of his ability and stamina. I think the key to this fight is really going to be who has the better footwork and if Aldo can successfully use leg kicks to slow down Edgar. It’s a tough call but I’m picking Aldo here. Aldo by decision.

Lavender Gooms: While it’s not Anderson vs. GSP, this right now is the closest thing to a super fight we’re going to see for at least the next year most likely. Even during his reign as lightweight champ the critique against Frankie was as man that was easily just walking around at 155 in a division where his competitors were cutting 20 or more pounds that he was too small for the division. People (including myself) were stupidly saying this while he beat a legend twice, defended it three times and arguably won his fight against Bendo. Frankie will be the first true challenge to the throne of the 145 champ. Even dropping a weight class, Edgar should have no problem making weight and maintaining the maddening pace for five rounds that he displayed at 155. On the other hand Aldo has had problems making the weight in the past and has had problems with fatigue in the later rounds and against Edgar…he will get into the later rounds. While Aldo’s leg kicks can be a problem for Edgar is he lands enough of them, I think Edgar will be able to stick and move with enough agility to neutralize Aldo’s greatest weapon. Tom’s River’s greatest son becomes two division champion and Sal looks to buy more walkout t-shirts. Edgar by decision.