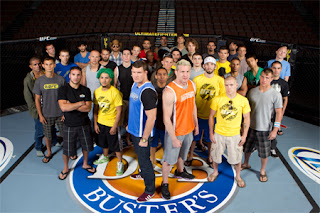 Hello MMAzing nation, Kid Moe...err I mean Presentable bringing you a better late than never edition of Post Fight Thoughts and Analysis. Last Saturday saw UFC and Spike TV's relationship come full circle as the final program being aired between their partnership was the season 14 finale of the platform that helped resuscitate and save a dead to rights company. What more fitting end for a groundbreaking program that involved many firsts for the sport of MMA to end with TUF's inaugural season of featherweights and bantamweights. Supporters shouting "WEC NEVER DIE!" were vindicated from this season and evening of fights as the little guys showed off  their amazing skills and incredible pace they can keep up to put on some very entertaining action. The event was main evented by the season's coaches, Michael Bisping and Jason "Mayhem" Miller, in a match that was unable however, to equal the level of the little guys they overshadowed.

Thoughts from the evening:

-Bisping looked dominant in against an over matched, and easily gassed Mayhem Miller, but where does he go from here? Despite essentially being done after the first round, Bisping looked as pillow-fisted as ever as he struggled to put away an exhausted Miller, and when the stop finally came it once again looked to be more of a result of Mayhem simply having enough than any damage Bisping was doing to him. Bisping, will seem to always be just on the cusp of having the honor of being dispatched by Anderson Silva, but likely needs one more big victory to get that chance. It's MMAzing's best guess for who is next? Demian Maia. 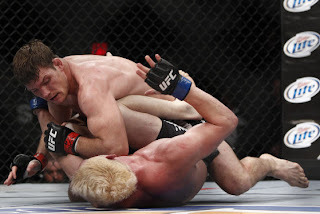 - What happened Mayhem? First off, we understand the Palms is quite tiny, but you promised us an electric entrance. Though Calvin Harris produces some awesome beats, just clapping your hands made us feel kind of dumb for standing up in anticipation of what you were going to do. Dana White was no fan either apparently calling this fight one of the most one-sided fights he has ever seen. That is a bit of an exaggeration as that honor in reality belongs to the champ everyone in this division is trying to chase.

- Though it was a bad showing after another one-sided beat down in his initial UFC stint against GSP, Mayhem absolutely deserves another chance. Few non-UFC fighters were able to generate the buzz and fan interest that Mayhem could and still can. Though he is going to need to be handcuffed to a treadmill for the next couple of months, I hope for and look forward to many more fun fights and awesome entrances from Mayhem

- Diego Brandao is a beast. The mini axe murderer swings everything with bad intentions and aggression that would make even the Wanderlei of the PRIDE era blush. Though he has a suspect gas tank, and not the most technically sound striking, Brandao showed an amazing chin, not even flinching as Dennis Bermudez dropped bombs on his chin, and that killer instinct he used to end all of his fights up to the finale in coming back from the brink and breaking Bermudez's arm in a hail mary arm-bar from the guard. 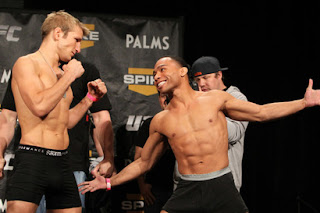 - The season's villain, may just end up it's biggest star. John Dodson may have been touted all season as a blown up flyweight, but his combination of speed and knockout power for this weight class might make him a contender sooner than later. The tiny Maurice Drew look a like has all the tools to become a fixture in the upper end of this division, and I look to see him fighting established contenders in the very near future.

- Somebody mix Tony Ferguson a walk-out track that starts with the audio quote "Where's your son at!" before the music kicks a la the "If you smelllll, what the Rock... is cookin!" of WWF/WWE fame. Awesome standing slug fest aside... that's all I hear in my head when I see this guy. Great fight against Yves though, I could have seen it go either way. The decision for Ferguson was in no way a robbery, but two judges scoring it a 30-27? I can think of a couple judging licenses that should be revoked immediately.

- Just about every fighter from this season will get another shot in the UFC. Because this was the first season of the lighter weight classes, the talent pool has not been mined dry, and not since the very first season of TUF will you see as many fighters become UFC mainstays as you will see from here. The small guys all showed great technical ability and knew how to put on a hell of a show.

- Oh and if you didn't already know, Marcus Brimage is pretty awesome. Go checkout his interview with Ariel Helwani already if you haven't, and if you have? Well that's why there is a replay button.