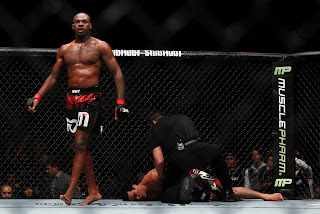 UFC 140 wrapped up this past Saturday and if you like fights being finished, this was a good night for you. 9 of 12 fights on the night ended via knockout or submission making for an awesome action-filled card. Jon Jones defended his title for the second time now, making this a first since Chuck Liddell's reign at the top of the division several years ago.

- Jon Jones is a motherf*cking MONSTER. Since his ascent to the top I had always believed that Machida offered the most interesting matchup for Jones and for a round at least this proved to be very true. Machida's range and striking ability managed to make Jones look tentative, vulnerable, and for once, kinda human. In the second, however, Jones' went Goro on Lyoto, using his strength and grappling prowess  to put the Karate Kid to sleep.

- Hate him or love him, Jones is the best fighter on the planet. Sure he showed some vulnerability on the feet, but Lyoto is a great striker and few others will be able to replicate his blueprint. On top of ever-improving striking and an unmatchable reach, Jones' shows amazing takedowns and grappling ability. By way of his size and strength he can always simply put his opponent in a headlock when there is any sign of danger. Jones is truly the most complete fighter in the sport right now, having the ability to be dangerous wherever the fight takes place, and with the killer instinct to finish.

- Frank Mir, add another one to the collection. Mir's execution of the kimura was picture-perfect as took home the arm of Big Nog. It was a brutal end that resulted in submission of the night for Mir.

- It's actually a bit of a shame that Big Nog's night would end in such a vicious manner. His hands and head movement have actually looked the most impressive that I have seen in a long time. The way he snapped his jab and hand speed was a thing of a beauty and he quite frankly was classing Mir for a bit. The fight most likely should have been his as Mir was maybe only a couple shots on the ground from being flat lined, but Big Nog's hubris got the best of him as he went for the sub and allowed Mir to recover.

- Where his brother failed, Lil Nog shined. It seems the way your chin can be broken after a devastating strike, it appears Machida broke Tito's ability to take a knee to the body. Lil  Nog went to town with body shots on Tito gave his most impressive showing to date. Lil Nog can put on some very entertaining fights, just don't give him a wrestler. Here's to hoping for Shogun/Lil Nog 2 in the future.

- Brian Ebersole, you had been so entertaining in your first two fights. This fight, not so much.

- "...but you cant stop... the ZOMBIE." Look up this clip of Eddie Bravo, good times. But on a real note, Chan Sung Jung, I apologize for not having the faith to pick you even as I wore your shirt while watching the fights. It was a short night for Jung as he tied the official UFC record for fastest knockout. It is always impressive to say the lighter fighters who pack finishing power in their hands. I am not totally sure what comes next for Jung as the featherweight division is quite shallow. I would like to him take on Hatsu Hioki though for a potential #1 contender fight.