Tap or Snap, Sometimes the Choice is Made For You 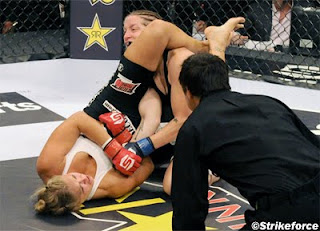 While UFC 139 has been rightfully getting the lion's share of attention this weekend, I really hope people were still able to check out the other stellar MMA events, namely Strikeforce Challengers. While there were many spectacular finishes on the card, there was one that really stood out to me: "Rowdy" Ronda Rousey's technical submission over Julie Budd. Rousey's last win wasn't as clear cut due to some confusion regarding a verbal tapout. Like any good student, Ronda didn't make that same mistake in this fight. Even when it looked like Budd was going to tap, Ronda held on in till the referee stopped the fight. Unfortunately for Budd, her elbow was dislocated before she was able to tap. What's so impressive about Rousey is just how well she's been able to adapt her Judo skills to MMA.

There have been many Olympic Judo players to try their hand at MMA and the results have varied. Most have a difficult time using their judo skills when there's no Gi to grip on to. Rousey, on the other hand, has little to no trouble getting trips and takedown from the clinch and when it hits the floor, she is able to grab armbars off her back and from the top. While she hasn't yet reached the highest level of women's MMA, its hard to imagine anyone with her skills in the clinch or the ground.

It's still unclear which division Rousey will wind up calling home. Personally I think she'd be better suited fighting at 135 where she'll have a bit of a strength advantage over her opponents. However, Strikeforce really REALLY needs women for their 145 division where reigning Amazon God Cyborg Santos has demolished all comers and is in need of fresh meat. Also, there's still rumblings that Gina Carano wants to fight and a Carano v Rousey fight is so sexy, it keeps me up at night. However, I hope she goes down to 135 and fights Sarah Kauffman and champion Miesha Tate, because those are challenging fights that are within her skill level. If she has to fight Cyborg, she'll get manhandled (also, I don't have the mental focus to think about Carano and Rousey without my mind wondering to wonderful non-fight related thoughts).

The only downside to all this is that Rousey's career is likely to be much like this past weekend, overshadowed by the UFC and men's MMA. If women's MMA was as deep and popular as men's, Rousey would be receiving much more media coverage. However, there's just not enough fighters to keep women's MMA busy enough to grant access to UFC. Could you imagine an all female Ultimate Fighter? Ok, I guess its not that hard since there was Fight Girls, but it still would be pretty interesting to say the least.

On a side note, anyone man enough to hit on Rousey is a better man then me. Or they value mobilty of their arms much less then I do.