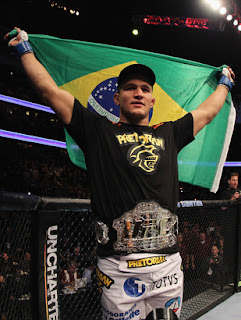 1. Junior Dos Santos – The new champ waits on the winner of Overeem/Lesnar for his first title defense
2. Cain Velasquez – Time to see how he responds to coming up short for the first time in his career
3. Alistair Overeem – The Reem takes on Lesnar at UFC 141 for a title shot against JDS.
4. Brock Lesnar – See #3. Clearly no warm-ups fights for the former UFC champ
5. Frank Mir – Mir looks to show his first win over Big Nog wasn’t a fluke at UFC 140.
6. Shane Carwin – Back surgery means we won’t being seeing The Engineer for at least 6 months
7. Fabricio Werdum – Werdum wants to fight Schaub. Schaub wants to fight Werdum. Is Werdum even in the UFC yet?
8. Josh Barnett – The Warmaster (terrible name) will take on Daniel Cormier in the new year for the Strikeforce Heavyweight GP Championship
9. Antonio Rodrigo Nogueira – See #5. Big Nog says he lost to Mir at UFC 92 because of a bad staph infection. Here’s his chance to prove his superiority
10. Roy Nelson – On Twitter, he said he’s fighting Kongo next. The UFC, also on Twitter, said he wasn’t. Roy is kind of weird.
Others receiving votes: Daniel Cormier 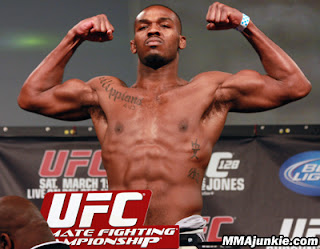 1. Jon Jones – 4 fights in 11 months. The young champ defends his belt against Lyoto Machida at UFC 140.
2. Rashad Evans – “Suga” has been #1 contender since May 2010. He may have to take another fight before he gets his shot at the title.
3. Dan Henderson – One half of the greatest MMA fight ever fought, Hendo is probably looking for a vacation after his war with Shogun…and a title shot.
4. Mauricio Rua – Shogun confirmed what many suspected…he can’t be knocked out.
5. Quinton Jackson – The UFC granted him his wish of fighting on the Japan card. He takes on Ryan Bader in February. Women of Japan beware…the man loves humping.
6. Lyoto Machida – See #1. Because of Rashad Evan’s thumb injury, Machida gets the next crack at the title.
7. Phil Davis – Mr. Wonderful was clearly more injured than originally thought. Hopefully we see him fight in early 2012.
8. Forrest Griffin – The original Ultimate Fighter winner seems bored with fighting and is considering a camp move. I vote AKA.
9. Rafael Cavalcante – The former Strikeforce champ defeated Yoel Romero in September…and because SF makes no sense, he doesn’t have a fight booked.
10. Antonio Rogerio Nogueira – Little Nog hasn’t fought since a tough loss to Phil Davis in March. He takes on Tito Ortiz at UFC 140.
Others receiving vote: Ryan Bader, Muhammed Lawal 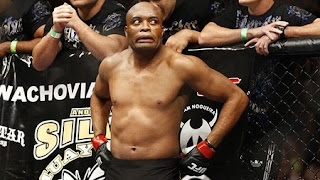 1. Anderson Silva – Rumors are flying that the pound for pound king will not be seen until a June 2012 title defense in Sao Paulo.
2. Chael Sonnen – The man loves to talk. He wants Anderson, but he doesn’t want to wait too long. Sonnen may be taking on Mark Munoz at UFC on Fox 2 in January.
3. Yushin Okami – Thunder was scared to punch Anderson. Hopefully he doesn’t have that problem when he returns home to Japan to take on Tim Boetsch.
4. Mark Munoz – Munoz defeated Chris Leben at UFC 138 and asked for a title shot. He pissed off the Spider. Bad call.
5. Damian Maia – Nothing of note here. Maia hasn’t been terribly exciting or relevant since his loss to Silva, despite going 3-1.
6. Michael Bisping – The Count ends season 14 of the Ultimate Fighter with a fight against rival coach Jason Miller on December 3rd.
7. Brian Stann – Stann looked out of Sonnen’s league at UFC 136. The All-American’s takedown defense will be continually tested until he fixes that hole in his game.
8. Vitor Belfort – The Phenom returns to Brazil in January at UFC 142 and welcomes Anthony Johnson to the middleweight division
9. Nate Marquardt – The Great will make his welterweight and BAMMA debut against fellow Yoshiyuki Yoshida at BAMMA 9.
10. Hector Lombard – The best can crusher in MMA handled business against Trevor Prangley at Bellator 58.
Others receiving votes: Luke Rockhold, Ronaldo Souza 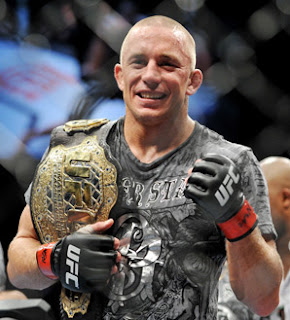 1. Georges St. Pierre – GSP will defend his belt at UFC 143 against Nick Diaz. On another note, he owes $80 to each of us for getting injured before UFC 137.
2. Nick Diaz – See #2. The pride of Stockton busted up BJ Penn like no one before. Unless he skips more press conferences, he gets GSP next.
3. Jon Fitch – The king of lay and pray fights another guy he should finish, but likely won’t at UFC 141: Johnny Hendricks.
4. Josh Koscheck – The former #1 contender made short work of Matt Hughes. Up next is Carlos Condit at UFC 143.
5. Carlos Condit – See #4. Condit and his manager think he got screwed out of the next shot at GSP. Cool story bro.
6. Jake Ellenberger – Ellenberger made short work of a grief-stricken Jake Shields in September. Up next is a fight against Diego Sanchez in early 2012.
7. Jake Shields – The former Strikeforce and Elite XC champ tries to avoid 3 losses in a row and takes on Yoshihiro Akiyama at UFC 144 in Japan.
8. Martin Kampmann – The Hitman beat Rick Story in a fairly uneventful fight at UFC 139.
9. BJ Penn – The Prodigy retired at UFC 137, but not really. Don’t expect him in the cage till mid-2012.
10. Rory MacDonald – Aries (I apologize Josh Barnett, this is worse) will miss an opportunity to fight in front of his home country. Claude Patrick will replace him against Brian Ebersole at UFC 140.
Others receiving votes: Anthony Johnson, Johnny Hendricks, Ben Askren 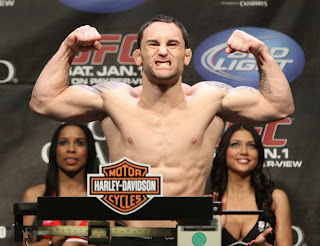 1. Frankie Edgar – For the first time in almost two years, Edgar gets to fight someone not named Penn or Maynard. He takes on Bendo at UFC 144 in Japan.
2. Gilbert Melendez – The reigning Strikeforce king defends his belt for what will likely be the last time, win or lose, in December against Jorge Masvidal.
3. Gray Maynard – The Bully is now 1-1-1 against Edgar. He probably won’t be receiving another shot at the title for some time and his rumored move to AKA seems like a smart career choice.
4. Ben Henderson – See #1. Bendo has never looked better and looks to continue the momentum to a title win over Edgar.
5. Clay Guida – Guida came up short against Bendo in a fight of the year candidate. He is basically the definition of a gatekeeper at this point.
6. Jim Miller – The New Jersey native looks to rebound from the beating Bendo gave him with a fight against Melvin Guillard on the first UFC on FX card.
7. Donald Cerrone – The Cowboy is on absolute fire and looks to continue his winning ways in what will surely be an entertaining scrap with Nate Diaz at UFC 141.
8. Shinya Aoki – The best fighter in Japan looks to run his winning streak to 7 witha win over Satoru Kitaoka on New Year’s eve.
9. Anthony Pettis – Showtime bummed everybody out by wrestling his way to a victory over Jeremy Stephens in October. He takes on Joe Lauzon in Japan next.
10. Nate Diaz – See #7. Nate’s boxing looked fantastic against Takanori Gomi at UFC 135. Fighting another tall lightweight with good striking should be a good barometer to see how much he has improved.
Others receiving votes: Eddie Alvarez, Michael Chandler 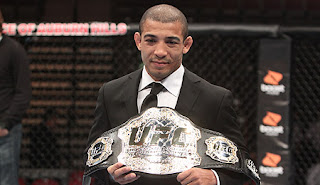 1. Jose Aldo – The reigning UFC champ didn’t exactly impress with his victory over Kenny Florian at UFC 136. He’ll see if he can do better at home in Brazil at UFC 142 against Chad Mendes.
2. Chad Mendes – See #1. This Team Alpha Male product isn’t stupid; he’s going to try to take Aldo down. The question is, will he be able to keep him down?
3. Hatsu Hioki – After a split decision victory over George Roop, Hioki takes on fellow UFC 137 winner Bart Palaszewski in Japan at UFC 144.
4. Kenny Florian – Ken-Flo came up short against Aldo, but has no plans to retire. He is going back to the lightweight division in 2012.
5. Pat Curran – Curran won his second Bellator tournament and earned a title shot against champ Joe Warren in 2012.
6. Diego Nunes – The Gun’s fight with Manvel Gamburyan has been re-booked for UFC 141 in Las Vegas. They don’t like each other…Manny wants to cut his finger. Seriously.
7. Dustin Poirier – Poirier ran his winning streak to 4 by finishing Pablo Garva earlier this month. Up next, a date with Erik Koch at UFC 143.
8. Mark Hominick – Hominck hasn’t fought since Aldo turned him into the Elephant Man at UFC 129. He takes on the Korean Zombie at UFC 140.
9. Marlon Sandro – Sandro rebounded from his tough KO loss to Pat Curran in the Bellator tournament final with a win over Rafael Dias at Bellator 58.
10. Bart Palaszewski – See #3. Bartimus was able to make quick work of Tyson Griffin at UFC 137. Next up, another wrestler.
Others receiving votes: Erik Koch 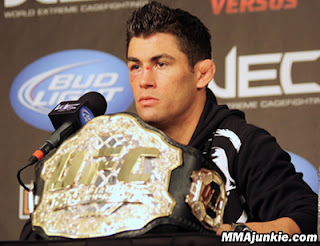 1. Dominick Cruz – The Dominator is still nursing a broken hand, but his next challenger has already been picked. Cruz looks to take the rubber match against Faber when he gets back.
2. Urijah Faber – See #2. The California Kid smashed Brian Bowles at UFC 139 with his hands never looking better. He has been campaigning to coach the Ultimate Fighter against Cruz in the coming year.
3. Joseph Benavidez – What does a man whose only two career losses are to the champion of his weight class? Answer: beat up some random guys while waiting for the UFC to open up a new weight class for you.
4. Brian Bowles – Marky Mark looked pretty gun shy against Faber. Look for the UFC to book a rematch with him and Miguel Torres next.
5. Demetrius Johnson – Like Benavidez, Mighty Mouse is better suited for the non-existent 125 lb weight class. Until then, he will fight Eddie Wineland at UFC on Fox 2
6. Scott Jorgensen – Jorgensen grinded out a victory over MMA veteran Jeff Curran at UFC 137, but failed to get the finish over the heavy underdog.
7. Miguel Torres – The former bantamweight king of the WEC beat Nick Pace fairly easily. See #4 for our prediction for his next opponent.
8. Renan Barao – Barao finished Pickett at UFC 138 to run his already impressive record to 27-1 (1). Expect a top contender as his next opponent, i.e. Joseph Benavidez.
9. Brad Pickett – Pickett lost in his home country in fairly devastating fashion. That kinda blows.
10. Michael McDonald – Only 20 years old and already has 3 UFC victories. Life must be good for Mayday right now.
Others receiving votes: Takeya Mizugaki, Bibiano Fernandes
By Doctor Law