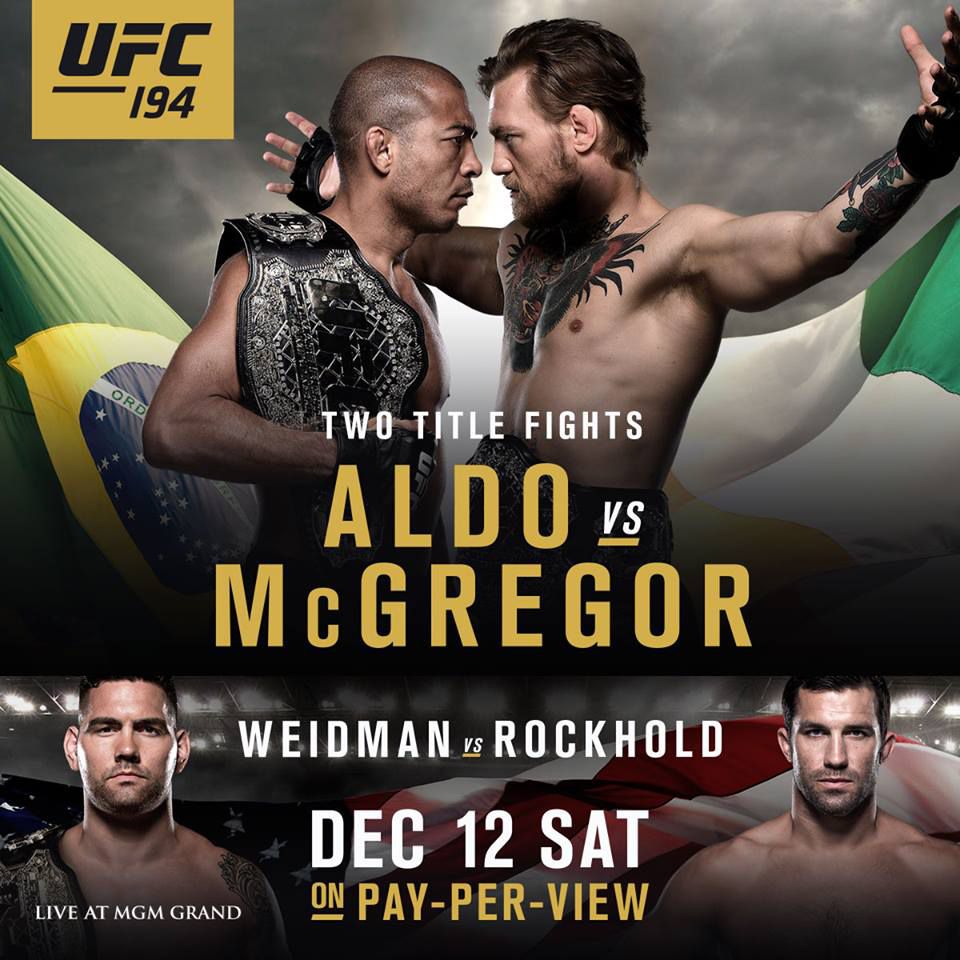 Ladies and gentlemen, boys and girls, people of all ages... we are finally here! Well... almost. It wasn't all long that ago that we said the featherweight division was devoid of stars and now it houses quite possibly the biggest fight the UFC can make on quite possibly the best card the UFC has ever put together. Anticipation for Aldo and McGregor is palpable after an initial postponement at what was supposed to be an It's MMAzing event out in Vegas. Mendes stepped in to fight McGregor as we all know and the legend continues. Somehow lost in all of this hullabaloo is a spectacular middleweight title fight between Chris Weidman and Luke Rockhold. Rockhold has been on one of the most impressive tears in recent memory while Weidman is the Anointed One, Vanquisher of Spiders, and reigning greatest fighter on the planet. Saturday night is bringing a stacked card with great fighters, but let's be real here... there is only ONE Conor McGregor.

No... Notorious! It's a real credit to the man Conor that he managed to steal center stage from a monster of a man who has been without peer for nearly his entire Zuffa run in Jose Aldo. Aldo has been a human highlight reel of violence in his reign, yet in struts this brash Irishman who has stolen the hearts (and betting lines) of the masses. Aldo is a killer in the cage, yet something about McGregor seems so effortless and masterful. Listen to Conor long enough and you will surely hear about the art of movement and that is precisely what Conor is in the cage: an artist. Could the hype train come crashing down? Absolutely. Could we see the coronation of the one true king? I'm expecting it. It's not that long ago we saw what movement and fluidity could do to stifle a heralded Brazilian killer in Renan Barao, Jose Aldo's teammate no less. McGregor by third round TKO. Bust out the red panties.

Flying massively under the radar is one helluva title fight. Weidman and Rockhold have seemed like an inevitability in recent times and it's so easy to envision about 30 different ways this fight ends. These are two men who are just good at everything. Chris has better hands, but Luke has better kicks. Chris has better wrestling, but I'd say Luke has better pure BJJ. However this plays out, it feels like we're seeing the beginning of some great trilogy or rivalry in UFC lore. I am a firm believer of the Mortal Kombat: Shang Tsung rule however, and that means since Chris Weidman vanquished the GOAT, that he took all his souls with him. So while I think the world of Luke Rockhold, as I have said on our show, I am picking Chris Weidman until the wheels fall off and we go off a cliff like the O'Doyle family. He has been perfect up to this point, save for the most questionable of political affiliations, so why stop now? Chris Weidman by unanimous decision.

It is the Incredible, Cuban Hulk vs Ronnie the Alligator. Are we going to see world class grappling acumen, or nuclear powered fisticuffs? These two men are pretty much a mirror image of each other in terms of just being of the highest caliber of athlete the UFC has. This fight really just comes down to a gut feeling, and unfortunately that gut feeling for me like everyone else was also Jacare, but I felt this fight was too close for us all to stand on the same side of it. I have seen Yoel gas bad late in a fight, but I have also seen him knock out a dude when he was already gassed out late in a fight... Jacare has the better tank, so the taxing grappling battles and expected swinging for the fences by both men makes me think he is better suited for the longer this fight goes, but Yoel can end you at any moment. Romero by KO round 2.

Speaking of world class grapplers... If Maia and Nelson hit the mats oh what a sight it will be to behold. Somewhere Joe Rogan and Eddie Bravo are getting grappler boners over some blunts. Where this fight will be separated to me however is in the stand-up. Props to Maia for getting his boxing to an actual respectable level in his career, but the younger Nelson is just a step faster and more explosive on the feet to me. Everyone said the key to his beating Thatch was going to be on the ground, yet an explosive 1, 2 later and Thatch came crashing down. I think camps rise together and Nelson and Conor are going to lift both each other's games up. Plus they have the Mountain. You have to score a critical roll to finish that guy. Nelson by decision.


Holloway is a future contender. Like Super Sage now, this kid came in super young and we've watched him grow before our eyes. Holloway has developed good power in all his strikes and has really upped his takedown defense and defensive grappling abilities. Stephens of course always carries a whole lot of power in his weight missing frame and while he may have cost our man Bob a lot of money, you always have to respect that he's going to be in the fight. Stephens derailed the run Dennis Bermudez was on, but what we saw in that match was Dennis being unable to overcome the massive size advantage of Stephens. Holloway is a much  taller and rangier fighter so I expect him to control the distance with his strikes. Holloway by TKO round 3.