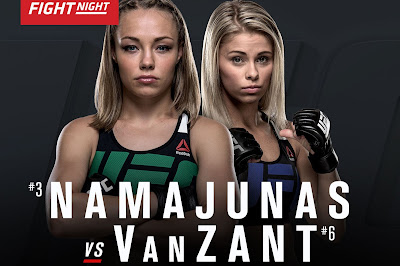 Whew baby this is going to be a busy week and a half.  Not counting other promotions, between December 11th and the 19th there are FOUR UFC cards and three alone this week.  But there isn't a bad card among the four and anyone who is even a remote fight fan is absolutely giddy and it all kicks off this Thursday with some of the UFC's youngest and brightest fighters.

I am on record thinking that Rose and Paige fighting now is way too early.  Both of these ladies will in the near future be the two of the top ladies in their division.  While the winner of this fight will be undoubtedly be extremely close to a title shot (aka a date for a pummeling at the hands of Joanna Champion), the loser won't be that disadvantaged since there aren't many strawweights and both of these girls have heat behind them.

This should be an entertaining fight as both of these women aren't afraid to be aggressive and mix it up.  Paige has shown a penchant to be scrappy and Rose won't hesitate to throw a funky kick or try a flying armbar at moment's notice.  The road to beating Rose was shown in her fight against Carla Esparza, by using pressure and superior grappling to wear her down, two things that just so happen to be Paige's best weapons.  Having a gameplan and implementing it are different things however.  While Carla may have been able to shut Rose down, we can forget that Rose is dangerous in any position with her superior submission skills.  Ultimately, I think Rose will have grown from the fighter she was a year ago, be able to avoid being push up against the wall and keep the fight standing where she holds the advantage.  Thug Rose by submission in 3rd.

Chiesa does his best work when he's grinding his opponents out and taking them to the ground.  Chiesa will likely enter the fight the larger fighter and attempt to use that to dictate where the fight takes place.  Miller is as tough as they come though, possessing an ability to draw people into his type of fight.  Would not surprise if this fights turns out to be primarily held in the center of the ring with both of them winging punches.  Miller by decision.


Pfister is a tough fighter with good wrestling who'll look to get it to the ground blah, blah, blah.  No one cares about Cody.  We're not here for him.  Even his own momma is more looking forward to seeing the guy he's fighting.  The wunderkund aka The blond bomber aka The new prodigy aka Sage Northcutt.  The 19 year old neophyte who took the UFC by storm with his blitzing of Francsico Trevino (and then his Matrix-level flipping after the fight). Sage will be able to use his quickness and footwork to keep Cody at a distance and pick him apart with a variety of kicks and strikes.  Guaranteed Sage will throw some type of nutty kick in this fight.
Sage by TKO in first round.

Picking Northcutt- All of us
Picking Pfister-

Two TUF alums to start off the main card.  Theodorou hasn't lost yet since winning TUF Nations and is your quintessential grinder.  Theodorou probably wouldn't make it on to my Draft Kings lineup because grinders gave you horrible points but is a smart pick for It's MMAzing fight picks. Theodorou by decision.

Picking Santos-
Picking Theodorou- All of us