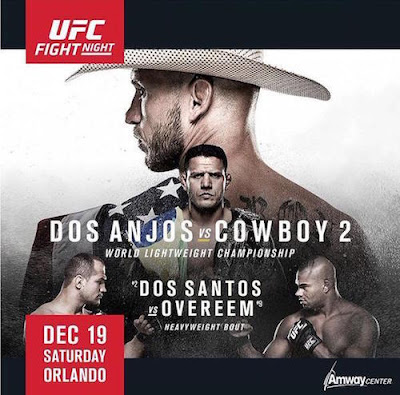 Coming off a maddening week of UFC events is the last card of the year...and what a card it is! Fox is hosting the first title defense of the newly crowded UFC Lightweight Champion Rafael dos Anjos when he rematches the surging Donald Cerrone. Also we'll get the highly anticipated heavyweight showdown between the former UFC Heavyweight Champion Junior dos Santos and former K-1 Grand Prix Champion Alistair Overreem. In addition there's a solid lightweight scrap between Michael Johnson and fan favorite Nate Diaz.

I have to say, for me, it still doesn't totally feel like Rafael dos Anjos is the actual Lightweight Champion. Beating Donald Cerrone (all be it for a second time) will certainly help me see dos Anjos for the champion he is, instead of the middling fighter I somehow still see him as. This is really more on me because dos Anjos has been tearing it up and kicking serious ass for a while now. In fact, even though Cerrone has looked incredible in his recent fights, I'm still picking dos Anjos to beat him again. If dos Anjos can keep getting these high quality wins it'll finally force me to replace the vision of him losing to Clay Guida with him beating the very best this stacked division has to offer. Rafael dos Anjos by decision

This fight has been in the making for a while now, and it's finally about to happen. On paper this should be a really fun stand up war. Dos Santos has extremely heavy hands and is as tough as nails while Overeem has a surplus of ways to damage and finish a fight. The big question is can dos Santos land that big punch and if so, can Overeem take it without being knocked out on his feet? I think a big KO win for dos Santos is a likely outcome for this fight, but I can never go against my beard saving bro, Overeem. Overeem by TKO mid second round

Both fighters are coming off loses but for those who saw Johnson's last fight with Dariush they'll know that Johnson should have won that fight. I personally think Johnson is going to give Nate a lot of trouble in this one. If Nate can't establish himself early on by overwhelming Johnson with his punches, he'll have a harder time dictating the pace of the fight which could set the tone for the rest of the match up. Johnson by decision

Have to be honest here, I just don't know too much about Karolina in this one. I have, however, been impressed with Randa Markos, who had a good fight against Jessica Penne and a solid win over Aisling Daly. Randa is a fantastic wrestler with willpower to spare. If Karolina can't stop Randa from taking her down it's going to be a very long night for her. Randa by decision

This is a tough match up, both are promising young fighters who both have a solid skill set. Oliveira has the more mixed record, but I also feel he's faced the tougher opposition as well. I'm leaning more towards Jury who'll be making his debut in the featherweight division, but the reality is that this is a really close fight and either fighter can get the win here. Jury by decision