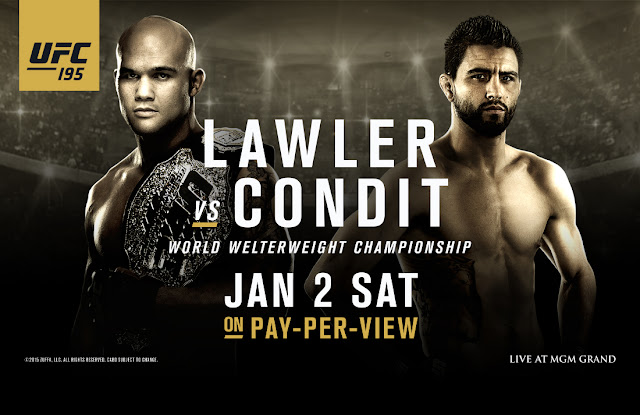 After a banner 2015, 2016 kicks off with a big time championship fight, with "Ruthless" Robbie Lawler defending his title against the former interim champ Carlos Condit.

There are alot of similarities between Robbie's last challenger, Rory Macdonald and the current challenger, Carlos Condit.  Among his many striking talents, Condit's strong jab will likely be utilized early and often to try and help him keep the distance against Lawler.  On the other hand, Lawler will be looking to aggressively press the action and stay in Condit's face.  While Condit has more knockout power than Rory, Lawler's constant aggression will make it difficult for Condit to get a clean shot.  This fight will go down to the wire.  Condit by decision.

Arlovski is 4-0 since returning to the UFC.  But it's not exactly the strongest undeafeted streak.  During his streak, he knocked out Travis Browne while half unconcsious and barely won a snoozer-fest against Frank Mir.  Stipe's strong chin should allow him the ability to get in close to Arlovski and then use his strong grappling to push Arlovski against the wall.  Of course, there is always the chance Arlovski pulls another rabbit out of his hat and somehow gets a title shot.  I am going to bet that the magical run ends this Saturday.  Miocic by TKO in 3rd.

Picking Miocic- All of us

Every card needs to have a fight like this.  Both of these guys have power and will be willing to trade which is normally a recipe for an entertaining slugfest.  Fight is a toss-up for me so I'll go with the Russian.  Tumenov by TKO in 2nd.

Picking Tumenov- All of us

Brandao has only lost to the elite in the 145 division which makes him a great test for young Ortega, who showed promise in thrashing Thiago Taveres.  In the first round Brandao looks like a world beater; with every punch and kick he throws able to potentially end the fight.  If the fight gets to the second round however, the chances of him winning drop dramatically.  I am going to bank on Brandao getting it done in the first five minutes.  Brandao by KO in 1st.

A common theme running throughout this main card is going to be "this should be an entertaining fight" and this fight should be no exception.  Sims showed his immense knockout power in his debut match against Steve Montgomery and we all know what type of hands that Trujillo has.  Trujillo might be a tad bit more athletic and definitely more gangster.  Trujillo by KO in 1st.

Picking Trujillo- All of us
By Lavender Gooms