The It's MMAzing Top 5(?) Christmas Movies

On this Christmas-eve I give to you all gift, a top-five list.  We all love them and it's an easy way to get a post out.  We haven't done a list in while and what better topic than counting off the best Christmas movies.
To make this list a little different we won't include the obvious G.O.A.T.s(A Christmas Story, It's a Wonderful Life, A Charlie Brown Christmas, The Nightmare Before Christmas) since we can all agree those movies are great and anyone who disagrees is ISIS.  This list will be either Christmas-centric movies or movies set during Christmas.

This is a modern Christmas classic.  No matter what point of the movie it's on (which is only during December), when I flip to it I'm watching the rest of the movie.  Featuring a Will Ferrell, not far removed SNL and just coming off the surprise cult classic "Old School", this movie definitely caught me by surprise.  I thought it was the dumbest movie ever....until I saw it.  Every joke in the movie hit,  Zoey Deschanel's schtick hadn't worn thin yet  James Caan was hilarious as Buddy the Elf's dad.  Didn't watch this movie until the summer after it came out because of my prejudice, but it's been in my Holiday Rolodex ever since.  How he didn't get diabetes at the age of 5 with all of the sugar he ate is beyond me.

Can't talk about one without the other.  These movies follow the exploits of little-shit Kevin McAllister who
is first forgotten at home and then in an entirely different city by his horribly neglectful parents.  This movie can make it on to this list on the superhuman durability of the Wet/Sticky Bandits.  Marv and Harry, two guys just trying to make a living, suffered through booby traps that would have killed/maimed/mutilated normal men.  These dudes were electrified, set on fire, smacked in the face with metal beams and thrown off stairs and let's not forget hit in the face with a brick from five stories up.  This highly improbable movie where a child fends off the attacks of two dangerous criminals is a favorite of all.  In a different universe, Home Alone could have been a Lifetime movie where the kid gets taken away by child services for having forgetful parents.

Billy bob as an alcoholic, cantankerous Santa who robs shopping outlets on Christmas eve with his small-person elf sidekick.  Normally not a fan of black comedies but this one was on another level.  I might be a softy but
when Willie ran from the police to give Thurman the pink stuffed elephant that was a touching moment.  Lauren Graham was also at peak Gilmore Girls level hotness.


Jingle All The Way

This is more a guilty movie pleasure I will begrudge you that.  It's not a good movie but it's a great movie because it's vintage Arnold comedy.  We've all experienced the horrors that is last minute Christmas shopping but this movie is INSANE with the lengths those bozos Sinbad and Arnold go to get their kids a Turboman action figure.  Let's also not forget this movie also has Arnold in a prop Turboman suit that could moonlight as a prototype Iron Man armor and Anakin Skywalker. 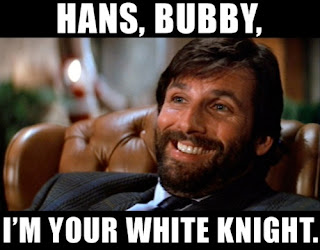 Some people argue this isn't a Christmas movie.  To those people...fuck em.  Story of a man going to city of angels trying to make it work with his wife by spending time with her at her office Christmas party filled with LA yuppies ("Hey babe, I negotiate million dollar deals for breakfast. I think I can handle Eurotrash"), who just at the wrong place, at the wrong time.  The 80's was filled with steroid influenced, muscle-bound action heroes (Arnold, Stallone, etc) and John McClane was the first everyman action hero, who looked like he was ready to keel over about a half hour into the movie.  My man is barefoot throughout the movie! ("shoot the glass").  I am still not sure if the Nakatomi building is a real place or not in Los Angeles.  It is arguably one of the greatest action movies with one of the greatest villans of all time(HANS GRUBER!) and greatest catch phrases of all time.  Christmas would be honored to have this movie in it's pantheon.
By Lavender Gooms