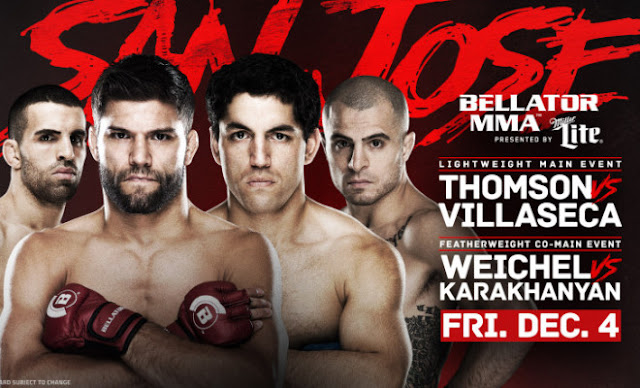 Bellator returns to San Jose for another show and the It's MMAzing crew returns to Bellator to provide you with live event coverage. Josh "The Punk" Thomson take son Pablo Villaseca in front of Thomson's home crowd with Georgi Karkhanyan and Daniel Weichel doing battle in the co-main event with the winner likely getting the next crack at Daniel Strauss's featherweight title. All that an a "Professional Predator" sighting. Check out our predictions below

Josh Thomson fights for the fourth time in 2015 as he takes on Pablo Villaseca, a relative unknown. "The Punk" is fighting again in his backyard of San Jose, California where he is quite the fan favorite. Thomson, one of the best lightweights in the world for a decade, is rightfully a massive betting favorite over Villaseca. We talked about how excited we were to see Josh Thomson possibly fight "Ill" Will Brooks, but it sounds like Thomson has his sights set on former lightweight champion Michael Chandler. Either way, I expect this victory to be a relatively (it's still cage fighting) easy night at the office for "The Punk." Thomson by one-sided decision.

Picking Thomson: All of us
Picking Villaseca:

Georgi Karkhanyan continues his question to become a featherweight champion in two organizations when he takes on former title contender Daniel Weichel. Karakhanyan, the former WSOF 145 lb champion, is coming off a very impressive victory over Bubba Jenkins in his Bellator debut in January. He took out the national champion wrestler within two minutes with a slick guillotine choke. Daniel Weichel came unbelievably close to taking then-featherweight champion Patricio Freire's title. It's hard to imagine the winner of this fight not getting a title shot. I go Georgi by 2nd round submission.

Derek Anderson and Patricky Freire have decided to do it again (brother). Anderson and the larger Pitbull brother competed against each other 3 years ago with Anderson taking a unanimous decision. This fight might have championship implications, especially for Patricky. Pitbull and his brother infamously got in a scuffle with Will Brooks at the fighter hotel in the days prior to Brooks' successful lightweight title defense against Marcin Held. Given Josh Thomson's lack of interest in a title shot, it's possible that Patricky can get a title shot with a win here. I want to see that security footage. Pitbull by 2nd round TKO.

As we discussed on the show, I'm not to act like I'm particularly familiar with either of these gentleman. I am picking Soto to win here for two reasons. The first is the trains at Team Alpha Male. Urijah Faber is fantastic and scouting talent and they run a world class team out of Ultimate Fitness in Sacramento. Picking against Team Alpha Male guys in general is questionable, let alone in the up-and-coming stage of their careers. The second reason is because Soto's nickname is "Dr. Mario." That is an excellent nickname and f*cking fantastic video game. I can't pick against a man with a nickname like that. Soto by Team Alpha Male guillotine choke.

Picking Piccolotti:
Picking Soto: All of us

Brian Rogers always brings the fire and I'm excited to see him fight in person again. I'm still bummed that he cut off the dreadlocks, but I guess if you want to be "The Professional Predator," you're going to need a professional haircut. As Lavender Gooms likes to tell me, a crispy shape-up is very important. I expect a slugfest in this one, but when the dust settles, I see Rogers picking up a hard fought decision victory.