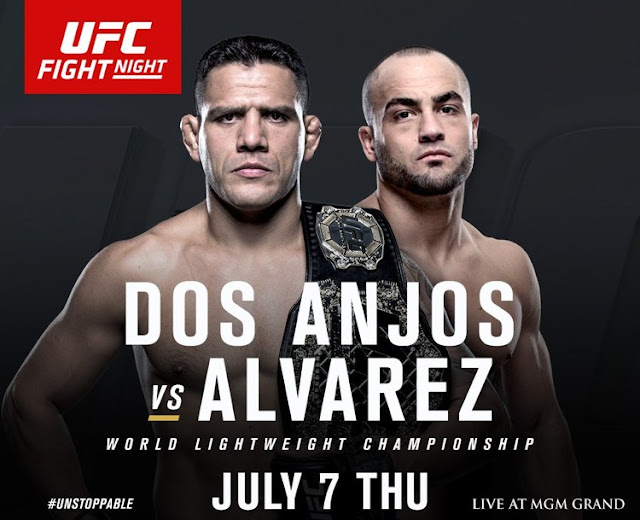 It's the start of international fight week, where just counting the UFC cards, there are over 20 fights and five title matches in a three-day span.  The week kicks off with the UFC Lightweight title up for grabs as Rafael Dos Anjos scraps it up with former Bellator  Lightweight champion Eddie Alvarez.

Dos Anjos has had his problems in the past with fighters who are strong wrestlers (Gleison Tibau, Nurmagomedov) and Alvarez fits into that category.  He's also an excellent boxer, so Alvarez is by no means a one-trick pony.  With that said, the champion has had an unprecedented evolution in the last
two years and has looked like a completely different fighter than the one who got "Tibaued" and even the one who had his last bad loss against Nurmagomedov.  While Dos Anjos is super aggressive in his approach, he isn't reckless, still maintaining his composure and his technical skills.  Much like in his fight against Pettis, Dos Anjos will keep the same insane pace going for all 25 minutes and should get the better of the exchanges with the hittable Alvarez.  Dos Anjos by unanimous decision.

You would never guess this if you only followed Roy Nelson's fights in his UFC career but he is an excellent BJJ practitioner, possessing a black belt from Renzo Gracie. Against an overwhelming fighter like Lewis (whose hype train I am solidly on), a smart approach of attempting to get it to the ground should be in the game plan.  Even though Lewis was able to get off his back in his last fight against Gonzaga, Nelson shouldn't try to stand and bang with Lewis, who has shown himself able to proficiently utilize his massive size, power and athletism.  But Roy Nelson and game plan has never meshed well.  He's going to stand and bang with the The Black Beast.  While Nelson is the more technical fighter on the feet and on the ground and you can never discount the right hand of Nelson, the physical prowess of Lewis should carry the day. Nelson still has great chin but it's not indestructible and Lewis should have ample opportunities to test it.  Lewis by KO in 3rd round.

This is a tough match-up.  UFC newcomer Muhammed was the Titan FC Welterweight champion who shows some promising skills in the fights I watched, while Jouban has been in some very entertaining fights in his time in the UFC.  This match up is a tough pick for other reasons as well.  A pro in Alan's corner is a hard to pick against such a handsome man.  This guy is a legit model(other places might objectify female fighters, this is the website/podcast you go to for the objectification of male fighters #Equality).  On the other hand, Muhammad has the same first name Martin Lawrence's character who was the DJ from House Party.  If you haven't seen House Party, you're either under 25 or didn't grow up with many brown friends......You should watch House Party.  Muhammad has all the makings of a bright prospect for the division but I think for his first UFC contest Jouban will be able to edge him out in a slugfest.  Jouban by split decision

Outside of Clarke making this fight a grappling affair he doesn't stand much of a chance.  But even in that area Duffy isn't a slouch.  Duffy should have everything going for him in this fight, carrying more weight on his frame and being generally faster than his opponent. Duffy by TKO in 2nd round.


Picking Duffy- All of us