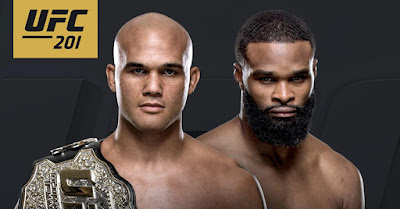 The UFC brings the Octagon to Atlanta to showcase a battle for the UFC Welterweight title. On one side you got a guy who is out there talking about maybe the most exciting champion we've ever had. On the other you have a guy whose last fight was on the silver screen with the members of N.W.A. (solid movie). In the co-main event we have a possible title eliminator between Rose Namajunas and Karolina Kowalkiewicz. Despite not possessing a ton of star power, the rest of the card is filled with action packed match ups. Check out our predictions below.


Robbie Lawler making his third title defe...you know what. We need to talk about something first. Lawler's talking about taking people's souls. Their souls. That is some terrifying sh*t. Look at the look on his face in that video. Does it seem like he's playing? As I was saying, this is Mr. Lawler's 3rd defense of his welterweight title. At no point during his title reign has his championship seemed secure. As our own Kid Presentable will tell you: at some point this is going to end in disaster. It's a matter of if, not when. I do not believe said disaster is going to happen this weekend in Atlanta. Tyron Woodley is an excellent fighter and a worthy title challenger (even though two other guys may be more worthy). As I said on the podcast, Woodley has about 7 minutes to finish Lawler. I honestly don't believe he has the gas tank to win three out of five rounds. Lawler has been knocked out once in his career and it was twelve years ago. Woodley isn't exactly Rickson on the ground either. While this  is a time where no title seems safe, I'm going with Lawler by 3rd round KO.

Karolina's "o is about to go." Am I picking against Ms Kowalkiewicz just so I could type that? I swear I'm not. Karolina Kowalkiewicz is an undefeated Polish standout in the strawweight division. Sidenote, what is going with strawweights in Poland? They are producing some dangerous female fighters.  While Karolina is yet to taste defeat, I honestly don't think she has fought anybody near Rose's talent level. Rose Namajunas bounced back from a loss to Carla Esparza at the Ultimate Fighter finale with three straight victories. She has shown herself to be an evolving fighter and while she is always hunting for a finish, she does not do so recklessly. Karolina is tough as nails, but I think she will eventually succumb to Rose's pressure.  Thug Rose by 2nd round submission. Probably a choke.

This is hard to say about a guy who was top five in the world only a few years ago, but does anybody really feel they can confidently pick Jake Ellenberger to win any fight in the UFC. I know that's a harsh indictment, but the man has simply not looked like the same fighter for the past three years. Since July 2013, Ellenberger is 1-5 with his lone victory coming against Josh Koscheck. He has jumped around camps during this time and is now training at Kings MMA with Rafael Cordeiro. Matt Brown is coming off a fight against Demain Maia where Maia ran a BJ clinic on him. There really isn't any shame in that given Maia's grappling credentials. What worries me about Matt Brown is what's going with this hair. What the f*ck is that?! Regardless, Matt Brown defeated heroin. Heroin. Brown by decision.

For a fight I'm actually very interested in, this isn't the easiest fight to write a prediction for. All I really got is this: I think this fight is going to be very good. Cisco is a brawler. Goyito is a brawler. Will Reebok let him wear his mask? I hope so. This is a tough one to call, but because he's old and I want good things to happen to him, I'm going to go with Cisco by decision.

For years Ian McCall was considered the best flyweight in the world. Was this because the UFC didn't have a flyweight division and Demetrious Johnson was fighting at bantamweight? Yes. That's exactly why. This isn't mean to diminish Ian McCall at all. Mighty Mouse is just that good. When McCall was active in the UFC he was easily one of the top flyweights out there. His only losses at this weight are to Mighty Mouse and Joseph Benavidez (Lineker doesn't count, he missed weight by 5 pounds). Justin Scoggins has long been one my prospects to watch. His karate-heavy style is just a pleasure to watch and frustrates his opponents. Predictably, he lost back to back fights after I told you all how awesome he is. Since then he's won two fights against lesser competition. Despite his experience and credentials, the long layoff  is making me doubt McCall in this one. He hasn't fought in  As a result, I'm going to go with Scoggins by decision.