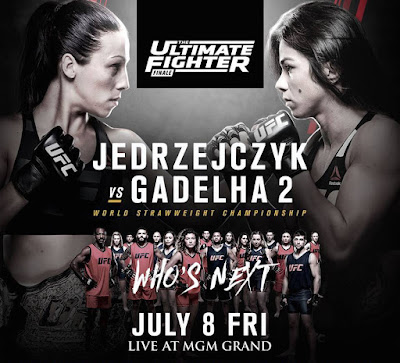 A rematch over a year in the making. The debut of the best lightweight not in the UFC. The return of a potential Asian superstar. Also, two fights from a reality TV show whose ratings are dropping at a ridiculous rate. I digress, we have the best possible matchup in the strawweight division. Nothing can take away from tha...what? Jon Jones is out?! Are you f*cking kidding me?! We were so close! SO GOD DAMN CLOSE!

Whatever. Check out our TUF 23 Finale picks below.

This marks the long awaited return of Joanna "Champion" Jedrzejczyk and Claudia Gadelha after they were forced to go on a reality TV show which produced ratings truly only Fox Sports 1 could be happy with. Seriously...nobody watches that channel. The ladies coached TUF and I, for one, can't tell you squat about what happened on the show. I'll do my best to live with that. These two first fought in December 2014 with Joanna taking a very close split decision of Gadelha. Since that time, Joanna has been a buzzsaw, picking up 3 dominating victories and cementing herself as 115 pound champion. Due to injuries, Gadelha has only fought once since the first fight, but was able to pick up a victory over former WSOF champion Jessica Aguilar. Gadelha's path to victory in this fight is to continue to put the pressure on the champion. In Joanna's last fight against Valerie Letourneau, it became clear that she is less effective while in retreat. That being said, I don't think Gadelha can maintain a pace like that for more than 2 rounds. The belt stays in Poland. Joanna "Champion" by decision.

Will Brooks, the former Bellator lightweight champion, makes his long-awaited UFC debut as he takes on extremely tough veteran Ross Pearson. Given the other match-ups champions of other organizations have been given when entering the UFC (see: Alvarez, Eddie and Melendez, Gilbert), the matchup with Pearson seems a bit strange. However, it appears that the UFC and Will Brooks very much just wanted to get him on one of these big Vegas cards. Mission accomplished. We previously called Will Brooks "a worse Benson Henderson" and while Benson's current status brings the word "worse" into question, the comparison between the two is fairly reasonable. Both are extremely well rounded, knows how to grind out a win and, as we saw in Brooks' fight with Marcin Held, are damn hard to submit. Pearson is always a threat in any fight he is in, but I don't think he gets it done here. Will Brooks' pressure will be simply too much for him. "Ill Will" by 3rd round submission.

Picking Brooks: All of us
Picking Pearson:

Poor Thiago Tavares. This is going to sound strange, but in all of his losses you can basically say that he was winning...before he wasn't. In basically all of his losses, there's a moment where you go "man, Tavares looks like he's going to this one"...and then he gets iced. Doo Ho Choi is a terrible match-up for him. Tavares leaves himself open to a lot of strikes and the Korean Superboy is a precision striker with great power. DHC has 14 wins and 1 loss with 11 knockouts. In the UFC, he's 2-0 with 2 knockouts in under a combined two minutes. Make no mistake about it: this is a match-up setup for for Tavares to get knocked out. It's going to happen. Doo Ho Choi by 1st round KO.

Picking Ho Choi: All of us
Picking Tavares:

Are we at the point now where I can no longer jinx Jake Matthews? I'm pretty sure I did him in when I said he was going to roll through James Vick. That...was not accurate. Since that fight Matthews has righted the ship with finishes of Akbarh Arreola and Johnny Case. I'm still very high on Matthews as a prospect as he's still only 21 years old. Kevin Lee is coming off a victory over Efrain Escuedero that very much could have gone the other way. Also, the fight wasn't good. Kevin Lee reminds me of Mike Easton in all the wrong ways. They talk a huge game and then their fights are duds. That's besides the point. I'm on the Matthews hype train. He's gonna take this one. Matthews by submission in round 2.

Picking Lee:
Picking Mathews: All of us