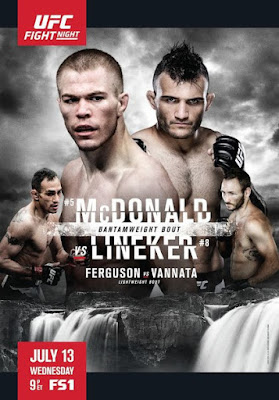 With barely a moment to catch your breath after the whirlwind that was UFC 200/TUF 23 Finale/Fight Night Dos Anjos vs Alvarez we're greeted with a card that, while lacking in name value, is strong with action fighters and promising up and comers. UFC stops off in South Dakota for the first time to host a very close and exciting match between former title contender Michael McDonald and heavy hitter John Lineker. Originally Tony Ferguson was schedule  to headline with Michael Chiesa, but now Chiesa is out and Landon Vannata is in. Other notable fighters you'll see are Tim Boetsch, Josh Samman, Kyle Noke, Louis Smolka and Ben Nguyen.

This really should be a fun match up because both fighters more often then not end up finishing their fights in spectacular fashion. For McDonald the best avenue to victory is to get Lineker on the mat and work for superior ground position en route to locking up a submission. Lineker is going to want to keep this fight where it starts, on the feet. McDonald is a good striker in is own right and if the two end up throwing down I don't think McDonald is completely out gunned. This fight is all about risk management for McDonald, he needs to be extremely careful when getting in range of Lineker to score his takedown. If he can't time that he'll be forced to play a dangerous stand up that the odds aren't quite in his favor. McDonald by submission.

While Landon may be an undefeated fighter coming out of the Jackson-Wink camp he's still grossly over matched in this one (granted I haven't seen him fight before and am going purely off the level of competition he's faced). Ferguson is not only a fighter that has continued to make big leaps in bounds in skills inbetween fights, he's also currently on an insane seven fight winning streak. The margin for victory for Vannata is extremely narrow, as he faces easily one of, if not the best fighter in the division. Tony by bloody TKO.


This should be a fun fight. I'm hoping both guys go in and try to get this done on the feet. Standing I think there's a really fun contrast in styles. Boetsch is gonna need to get in close and work his fight ending uppercuts, while Samman is gonna want to stay on the outside and punish Boetsch with heavy kicks to the legs/body/head. On the mat whoever is on top is going to be getting the better of the exchanges as I don't see either being super effective off their backs. Boetsch has a strong clinch game so if Samman is going to take it to the mat I think he'll need to time a double leg to be successful in that regard. This all being said, the elephant in the room is Boetsch's current three fight losing streak. Another loss here might be the end of his time in the UFC, if not the sport. Samman by TKO

Honestly, this fight is probably going to fly under most people's radar, but I'm personally extremely interested in this one. I've seen Nakamura fight a number of times over in Japan and he's a very skilled fighter on the mat. Kyle Noke is a more well rounded fighter that's equally skilled on the ground and on the feet. For Nakamura, success can really only be had from getting this fight on the ground. Noke is going to have the advantage in the stand up and even if it hits the mat he's not going to be a fish out of water. This should be a tough and tactical fight, but I'll picking more with my heart on this one then my brain. Nakamura by submission.

For me, this fight could have been the main event. What is lacking in name value is more then made up with high octane action packed fight styles. Both guys are strong, up and coming contenders with a bright futures and it's honestly a treat to see these two square off. I'm leaning towards Smolka, I feel his experience in the UFC, under the bright lights is going to help him get a tough win here. There's a lot of great match ups on this card, but I honestly think this is Fight of the Night. Smolka by submission.