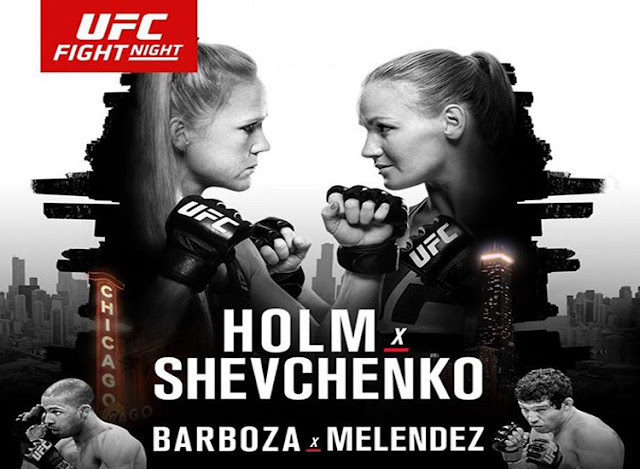 The UFC invades The Second City this weekend with former women's bantamweight champion Holly Holm taking on striker Valentina Shevchenko.  I'm writing this as I watch the Republican National Convention.  Why is that relevant to these fight picks?  Let me explain.  On the first day of the convention UFC president yelled into a mic and shouted nonsense of Trump being a fighter and how he's his buddy (there's the MMA connection) and then that made me remember an article I read that Holm is supported Trump as well.  That makes me sad.  Here are some picks

This fight between two high level strikers probably won't feature much grappling.  Shevchenko is 1-1 in the UFC and her only win was a close affair against Sarah Kaufmann.  Kaufmann is a fine fighter but she damn sure isn't Holly Holm.  Holm will use her foot work to pick her spots throughout and look for the counter.  Holm by unanimous decision.


Picking Holm- All of us.

Besides Trigger Nate Diaz, Cesar Gracie fight team has fallen on hard times.  Nick Diaz was last seen losing to Silva and realizing the NSAC was selling wolf tickets in his hearing for his suspension, Shields getting a hold held too long by Palhares and last Mr. Melendez coming off two losses and getting popped for PEDs.  Barboza has been suspectible in the past to fighters who have a strong base in wrestling and boxing and do you know who happens to be pretty good at both of those?  That would be El Nino.  Nothing is more dangerous than a cornered animal or a top flight fighter who is riding a two fight losing streak.  Gilbert fights smart, utilizes his wrestling and doesn't get into a brawl with the dangerous Muay Thai specialist.  Melendez by unanimous decision.

Like Stephan A Smith says when he's talking about Aaron Rodgers, Francis Ngannou is a bad, bad man.  Ngannou by really, really bad KO in 1st round.

Picking Ngannou - All of us

I understand that every professional athlete (a fighter especially) needs a certain level of self confidence which borders on arrogance to get where they are.  I understand all of that logically.  However, for some reason....I can't stand how cocky Felice Herrig is.  She will stare chicks down in weigh ins as if she's about to wreck shit up.  Gives these girls the kinds of looks like they're in for some big
trouble.  Now on to actual analysis.  While she lacks power, Herrig is a technical striker, owing to her kickboxing career before her MMA career.  Both of these girls are tough and if Curran can't get this consistently to the ground, this fight will develop into a brawl.  As much as I don't enjoy saying this I give the Lil Bulldog the edge.  Herrig by split decision.