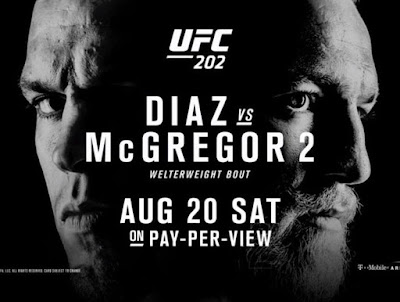 UFC 202 may very well end up being the biggest pay per view the UFC has ever done. Going off the success of Diaz's/McGregor's first fight and the recent shit show that was their press event, it seems like the stars are starting to align themselves for a huge night of fights. The first time Diaz and McGregor threw down there was so many odd X factors going into that fight. Diaz was a super late replacement, had a very different fighting style from Conor's original opponent and they were fighting at 170 lbs. There was also a ton of trash talking before the fight which only increased interest which all lead to one hell of a fight. McGregor got bested in the end and has been obsessed with getting revenge ever since. This main event is really the driving force of this PPV, but there's still other notable fighters on the card like Anthony Johnson, Glover Teixeria, Donald Cerrone and Tim Means but really this is the Diaz McGregor show.

First and foremost this fight should be extremely entertaining. Their first fight was an instant classic, where we saw McGregor bust up Nate in the first round only to have the momentum drastically swing back in Nate's favor. Nate landed a clean one-two combination that had Conor shooting in for a takedown which ultimately lead to his demise.  The big take away in that fight was Conor overexerted himself earlier on and ended up running out of gas which ultimately lead to him getting caught in a textbook rear naked choke. This time around Conor knows he's not going to be able to blast Nate out of there in the first round like hes done to so many others. For Conor to be successful here he needs to be more tactical and focus more on winning rounds then finding that one KO punch. If Conor can exploit some of Diaz's weakness like his lack of leg kick defense and maintain a reasonable pace he should be able to get the win here. For Diaz, he needs to push the pace and get into Conor's head in hopes that it'll cause him to make some mistakes. Diaz already seems to have been laying the ground work to mentally weaken Conor, but we won't really know how effective that is until we see them in the octagon. Even though Diaz beat McGregor last time, I still think this is a pick'em fight. I went with Diaz last time, so why not angle this to be a trilogy. Conor by decision

This could be a really fun co-main event for this card. Both guys are easily top 10 if not top 5 in the light heavyweight division and they're both at their best when they're standing in the pocket and letting their hands fly. I do think that Johnson has the larger arsenal as we've seen him win with punches, kicks and brutal ground and pound. Teixeria is a really tough guy with a devastating left hook. If Teixeria is somehow able to get this fight in the later rounds and/or get Johnson on his back, I think his chances of victory increase significantly. This is a tough fight to call, but I think Johnson is holding the better hand. All he really needs to do is play his cards right. Johnson by TKO 1st round

This is another kinda tough fight to call for me. Mostly because I was really impressed with Story in his last fight where he was able to beat Tarec Saffiedine. There's a part of me that really wants to pick Story here as I've often counted against him, I'm just having a tough time coming around. It could also be that Donald looked extremely impressive in his fight with Patrick Cote as he was able to put The Predator away in the third. I think Rick has a shot to grind his way to a decision victory, but I'm just not willing to bet on it. Cerrone by decision

Since the other two main card fights are late replacements were going to instead focus on the main events for the Fox Sports 1 prelims and the Fight Pass prelims. This fight should be really fun to watch, Cody has been on a tear since joining the UFC and Mizugaki matches up well with Cody's style. I'm hoping these two let their hands fly and give us some fireworks but even if Mizugaki tries to play it safe and attempts to grapple with Cody I think he'll be able to hold his own there as well. Cody by KO 1st round

Another really good stylistic match up here as well. Neil is great all around and it'll be interesting to see how he approaches a very dangerous and sometimes wild Lorenz Larkin. The smart money is on Neil being able to get the fight in positions Lorenz isn't comfortable in. If Magny is forced to stand with Larkin it could be a very interesting match up, but even there I think Neil might be able to hang with Lorenz. Neil by decision