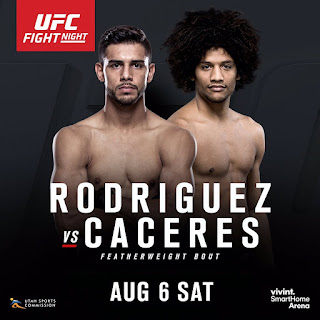 The UFC makes their debut in Salt Lake City this Sunday. They previously attempted to schedule an event in 2010 headlined by Jon Jones & Vladimir Matyushenko. This event was moved due to poor ticket sales. Why would the event with Jon Jones have poor tickets sales? Because they planned in it for a Sunday. A bunch of geniuses they have worked over at the UFC.

This event is headlined by what should be a truly fun scrap between Yair Rodriguez and Alex Caceres. We also have some solid veterans on this card along with a whole mess of a guys that I probably couldn't pick out of a hat. Also: CAMOZZI. Check out our predictions below.

Despite the randomness of this entire card, I'm very excited for this matchup. I find it hard to believe that this fight wont be exciting. Yair Rodriguez is being touted as a super prospect and, quite frankly, it's damn hard to argue with that. He's 4-0 since joining the Ultimate Fighting Championship off of the first season of TUF: Latin America. His last victory over Andre Fili came via flying head kick. That's right. Flying head kick. It was quite a sight to behold and will be on highlight reels for years to come. His striking and grappling have both looked very smooth and he has shown to be a fairly well rounded fighter. Alex Caceres shares many of the same characteristics as Rodriguez and is being a bit overlooked in this matchup. That is partly his own doing as it appears that Alex possesses all the talent in the world, but seems to a have a hard time putting it all together come fight time. I made the comment on the podcast that he is capable of beating and losing to any fighter and I honestly believe that. It depends which Alex shows up. I think this fight should be a good test for both men. While Yair is the favorite and I expect him to win, I don't think he will make quick work of Bruce Leeroy. I have Yair by 3rd round TKO.

Do you guys see that video? Start watching at around 3:49. Dennis Bermudez holds the Guiness World Record for the Fastest time to drink one litre of lemon juice through a straw. How many world records does Rony Jason hold. I'm pretty sure he doesn't hold any. Also, I remember the time he got angry and broke his hand punching a wall after he lost to Jeremy Stephens. Not a good look homie. Jokes aside, Dennis Bermudez is an elite featherweight. He appears to just keep getting better. He's suffered a couple tough losses to Ricardo Lamas and Jeremy Stephens (managed to keep his hand unbroken though), but there is no shame in those losses. Bermudez is well rounded, but he always makes at least one supremely odd choice in every fight that puts him in peril. I think that'll happen in this fight, but it won't be enough for Jason to capitalize. Bermudez by 2nd round TKO.

The legend from Alameda, California returns to do battle against one of the best grapplers to ever compete in the UFC. Jokes aside, Chris Camozzi has got a nice run going for himself in his second UFC run. Since returning on short notice to compete against Jacare (again) and losing (again), Camozzi has rattled off three straight wins. Leites, also in his second UFC run, was on a five fight win streak in the promotion before losing two tough fights to Gegard Mousasi and Michael Bisping. While Camozzi is on a bit of a hot streak, I believe it comes to an end here. He has 5 career losses by submission and I believe it's about to be six. I believe Leites will get him down and that will be all. Thales Leites by second round submission.

This fight is on Fight Pass and you could pretty easily argue that it is the most important fight on the card. That's probably a sign for where we should expect marquee fights to end up. Cub Swanson was ever so close to at title shot before suffering two one-sided defeats at the hands of Frankie Edgar and Max Holloway. He rebounded with a win over Hacran Dias and seems primed to make one last push towards a shot. Kawajiri is 38 years old and has nearly 50 professional fights. He's 3-2 so far in his UFC run, but it's clear his best days are behind him. The past couple years have shown that he has a difficult time getting passed top 10-15 ranked opponents. As a result,I'm going to have to go with Cub Swanson by decision. Either way, this should be a fun battle between two veterans.