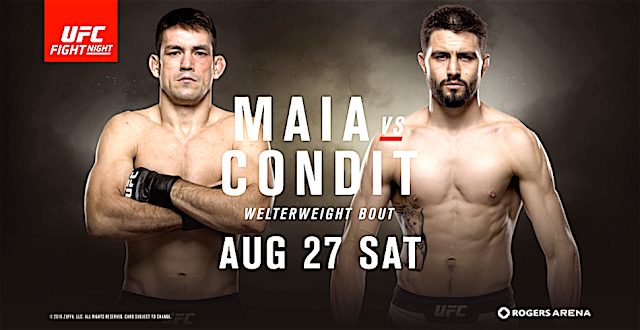 I don't know about you all, but I am still buzzing from last week's fights.  But time waits for no man.  UFC goes back to the great north, making some fight plans in Vancouver.  The top three fights are very intriguing.  The main event has potential #1 contender implications, the co-main event has the feather-weight debut of a former champion, and the third fight has the return of a mega-star fresh of her dazzling performance on "Dancing with the Stars".  Still bull@#$% she got robbed out of the crystal ball trophy.  Also, we preview the Bellator main event.

It's always a little scary when someone starts thinking about retirement in a combat sport.  It's even more of an issue when that person is openly talking about it.  That only tells you that their passion towards the sport could be on the wane.  That is the frame of mind which Carlos Condit enters this fight.  Maia on the other hand enters this fight absolutely rolling.  He has looked like a world-beater down at 170 the last two years.  In terms of striking, Condit has the marked advantage.  However, while Maia will never be mistaken for an expert striker, his ability to use his stand-up to get himself in a position to use his greatest strength, grappling and Jiu-Jitsu has improved exponentially.  I think the first time he gets a firm grasp on Condit and can get him to the ground the fight is over.  Maia by submission.

On the podcast this week I offered what I believed was spot-on and expert analysis of "Do Bronx", he seems to have a problem beating good fighters. I have been on the Charles Oliveira hype train for a long time, continuously thinking that eventually he'll turn the corner and beat someone worthwhile. For me, Charles is that pretty girl in high school who would give you just enough attention to keep you on the hook, tantalizing you with promise and potential, letting you believe you have a shot.  Well, it's time to break some news, she's dating the quarterback and Oliveira isn't going to live up to the hype.  Showtime should use this fight as a showcase at his new weight class and finish the fight in style early.  Pretty Tony Pettis by TKO in 1st round.

Picking Pettis- All of us

The closer this fight gets the more I get excited for this fight.  Both of these ladies push the action.  There isn't much separation in terms of skill and ability in a lot of match-ups in the strawweight division (Joanna Champion and Claudia Gadelha notwithstanding) so many fights are close to call.  In pretty much any fight that Paige is in for the foreseeable future, her opponent will come into the cage wanting to knock her down a peg (Rawlings earlier in the week said she wanted to "rip the head off America's sweetheart"), mainly because fighters are haters.  Besides her fantastic Paso Doble, Paige has shown toughness that belies her bubbly personality.  Paige controls the fight by pressing Bec against the cage, scoring takedowns.  Paige by decision.

Picking Paige- All of us

These two normally don't have boring fights.  They even had a very entertaining fight the last time they fought three years ago.  I can't seem to get the juices going for this fight for some reason.  Maybe it's because there aren't any real stakes in this fight.  Neither of these men will be serious title contenders again.  That could be the reason why for me.  This is pick'em fight.  While they both won their last fights by TKO, based on the Lavender Gooms "How washed up are you?" meter, Lauzon's TKO of Diego Sanchez was more impressive than Millers TKO of Takanori Gomi.  Lauzon by decision.

Picking Lauzon- All of us 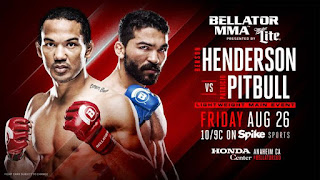 Because Bobby hates me we endeavor to give you all that great Bellator coverage, Bobby told me to also write a little something on Benson Henderson's return to lightweight.  Bendo will have the size and reach advantage in this fight.  Bendo will control the action and score timely takedowns to get back on track and set up a lightweight title fight later this year with Michael Chandler.  Henderson by decision.

Picking Bendo- All of us.