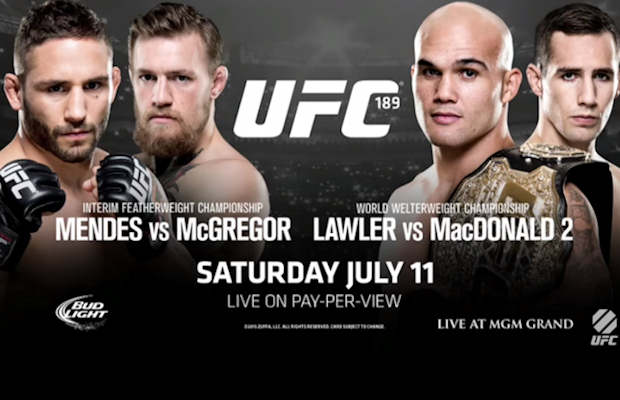 Life is full of disappointments.  The Knicks and Jets being absolutely horrid, the ending of The Sopranos, any of the Matrix sequels.  Last week we were able to add another disappointment when we learned that Aldo vs. McGregor, the dream fight we had all been waiting for, that 3/4 of crew (along with Phil) were making a trek Hangover-style to Vegas to watch had evaporated into the ether when the champ Aldo was forced to withdraw from his about with a broken rib.  But life is about how you deal with those disappointments.  While the guys won't get to watch Aldo fight the most electrifying and "Notorious" Irishman the world has ever seen, they still get to watch McGregor go against the second-best featherweight in Chad Mendes for a fake belt.

Business-wise how bad would it be for the UFC if Conor loses this fight?  The amount of money they poured into hyping the original fight has to be the most they ever spent and I'm sure they wouldn't be thrilled to have to hype Aldo-Mendes III.  I'm sure we'll talk bout that on the podcast if that outcome occurs.  Personally, I don't think McGregor will lose.  In last weeks podcast Marc took some issue with how Bobby and I predicted early round victory for McGregor, assuming we were inferring that Chad is a bum.  That couldn't be further from the truth.  Chad actually has a great chance of winning and saying otherwise would be idiotic.  This isn't some tomato can they got off the strip.  This is the
man who's rolled over top competition and his only loses have been to the present G.O.A.T. of the division.  He's an excellent wrestler, strong, athletic with solid striking to boot.  But this is one of those fights where my pick is about my gut feelings and being on the hype train that Conor will be the next great fighter.  We haven't seen Conor's take down defense get tested yet and if Chad is able to take him down this fight could end quickly.  I'm inclined to believe that a man who talks as much shit as Conor and seems to truly not care who is in front of him is because of a supreme confidence in ALL in his abilities, which includes his ability to keep the fight standing and not end up on his back.  If this fight is indeed primarily engaged on the feet, it won't be pretty for the fighter from Team Alpha Male.  Conor's pinpoint boxing along with his sizable reach advantage will help and dynamic striking leads the way.  And... the people of Ireland rejoice. McGregor by 1st round TKO

Before his first fight for the title, Robbie beat Rory by slim margin in their first fight.  I think Rory is in for a tough match up to unseat the champ.  Rory has a penchant for not being great at handling pressure too well and has a bad habit of fighting down to this competition.  I don't believe that will be an issue in this fight.  Rory will be attempting to avenge a loss and will be fighting for UFC gold so I believe we will see the best Rory MacDonald we've ever seen.  On the other side, Robbie has put it all together in his second stint in the UFC.  We've yet to see Rory put it all together, we've seen it from Robbie already and it's pretty damn good.  If Rory can take Robbie down (not the easiest thing), he can control where the action takes place and stay away from Robbie's stand up.  I'm going with destiny and the heir apparent to GSP in this fight but wouldn't be shocked at all to see the champ retain his belt.  MacDonald by decision.

This fight has "Fight of the Night" potential.  I really want to show solidarity for Bermudez since he's from the New York area as well but his tendency to go balls to the wall in fights has left him open in the past to getting tagged with too many unnessary strikes.  That doesn't instill alot of confidence against a guy like Stephens.  Stephens is a skilled striked and might cath Bermudez on his way in.  If Bermudez is smart and times his takedowns well I would have alot more confidence picking him to win a decision, but he really hasn't shown us that in the past.  With that said I'm gonna predict a quick night of work for Bermudez. This fight might be the one that kills my parlay.  Bermudez by TKO in first.

Bermudez: All of us
Stephens:

Like I said on the podcast, Thatch is a big sum' bitch.  Henderson showed how a smaller fighter could beat Thatch, but Gunnar Nelson is no Benson Henderson.  I believe Thatch takes what he learned in defeat and uses his reach and size advantage to end this fight quickly.  Thatch by KO in 2nd.

This one is tough to choose for me.  Pickett is wily veteron who hasn't lost to many guys who aren't top notch, while Almeida is an up and coming stud and I love myself some young prospects.  But this is just the type of fight where a guy like Pickett halts the momentum of a young fighter by giving him a clinic in grappling and coming out with a decision.  Still torn who I'm going to pick here (especially for my parlays) but at the moment I'm writing this I'll with the scenario I laid out above. Pickett by decision.