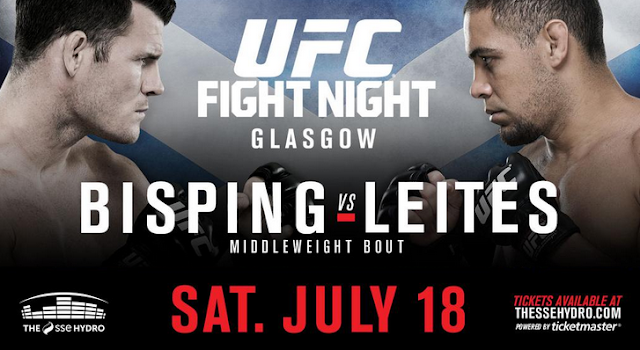 The UFC makes their debut in Scotland this Saturday night (morning for us in the west coast). What does the UFC do when they have a debut card in a part of the United Kingdom? They call up Michael Bisping and ask him if he's willing to sh*t talk a large Brazilian and then have a nice scrap. We also have Ross Pearson and Evan Dunham going at it and Joanne Calderwood fighting in her home country. So wake up on Saturday, make a cup of coffee, cook an omelette and enjoy some violence.

Michael Bisping has been alternating wins and losses for the past couple years. He's trying to build some momentum off of us UFC 186 victory over CB Dolloway. Leites is undefeated in his current UFC run. He also appears to be in far better physical shape than before. I know I get accused a lot of being a Bisping fan...and that's pretty accurate. I'm on board with this guy in general. Also, I'm enjoying the old man movement happening in the UFC. I got Bisping picking Leites apart for 25 minutes.Bisping by TKO.

A fun lightweight fight between two veterans known to put on exciting fights? Sounds about right for an early morning card. While fight doesn't have a ton of relevance, this is a great fight for a new market to see. Dunham and Pearson aren't capable of having boring fights (now I jinxed it). Despite the likelihood of fireworks, Pearson is on a different level than Dunham. He has only 1 loss in his last 7 fights if you ignore the Diego Sanchez nonsense. Mr. Dunham is getting knocked out. Pearson by 2nd round TKO.

There is only one Conor McGregor...and Joseph Duffy choked him out in 38 seconds. I know that was a long time ago and Conor is a different fighter now, but I'm still not picking against the biggest favorite on the card. I'm going to take Duffy by 1st round submission.

Joanne Calderwood tries to rebound from her disastrous loss at the hands of...(hold on, Googling)...Maryna Moroz. That fight went as bad as possible for JoJo. Apparently she was dealing with personal problems going into that fight. Hopefully she has them sorted out as the UFC has again given her a fairly favorable matchup. Cortney is coming in on about 10 days notice. It's hard not to think JoJo runs through her. That being said, we all thought the same about Moroz. Calderwood by 1st round TKO.

I know who Pawlak is and I don't know who Edwards is. I still picked Edwards. He's a huge favorite. This is the part of the card where you can make that omelette I discussed above.

Does Mafra really think he's going up against a guy from 110th St. and make it out without feeling that Slapjack? With Booker T and Sister Sherri in his corner, I don't see how Stevie Ray loses this matchup. What? A different Stevie Ray? A Scottish guy, not a black guy? Oh well, Stevie Ray by Slapjack (TKO) in the 3rd round.