As the old saying goes, if at first you don't succeed pray to God Cain Velasquez doesn't get injured again. Seems UFC has been praying to the MMA Gods and at least for now they have listened! After Cain wasn't able to compete at UFC 180 in Mexico City, the UFC decided not to walk away from the table and threw those dice again and what we have is one hell of a Pay Per View event. Cain is defending his belt against a primed and game Werdum and the co-main event is a dream match five years in the making when Gilbert Melendez finally faces off with Eddie Alvarez.

My thoughts going into this fight haven't charged much since they were first suppose to meet back at UFC 180. Back then and even now I think Cain is just the better overall fighter. Some X factors like Cain coming back from injuries and Werdum's improved striking are a little concerning when picking Cain, but his past performances just speak louder to me. I think Cain will be faster and maybe a little more varied in his stand up attack, I also think if he chooses to Cain can take the fight to the mat whenever he wants to. If the fight goes to the ground I think that's where things can get very interesting. Cain is so busy on the ground he might be able to overwhelm Werdum with ground and pound and advancing positions, but he'd be putting himself in some danger by doing so. Werdum is no stranger to tapping the unbeatable, as seen with his huge victory over Fedor many years ago. Cain hasn't been tapped before but neither have a lot of guys before facing Werdum. I think if Cain is to take it to the mat it should be after he's already worked Werdum over standing. This all being said Werdum does seem to have turned a corner in his career. He's been tearing it up in the UFC since his return and he's no stranger to shocking the world (that Fedor win was very impressive for the time) but it's asking a lot to be able to shock the world a second time. Cain by 3rd Round TKO (Ground and Pound)

Picking Cain: All of us
Picking Werdum: none 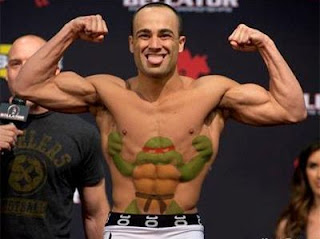 Now this is a great co-main event because this has been a dream fight for years now. Not only because these two were champions at the same time for different organizations, but they also both have extremely fan friendly fighting styles. Both have had multiple fight of the year performances and are personally two of my favorite fighters. It's seriously hard not to admire and respect that these two come out not only to win but put on a show as well. Both guys should also feel a little pressure to preform in this fight since both are coming off loses. I think the pressure will just be more motivation for the two to push themselves even harder. As for the fight itself I feel Alvarez is probably the more polished boxer but Melendez will most likely have a slight advantage in the wrestling department. I think this fight will mostly be fought on their feet so I see Alvarez getting the nod in this one. More important then who wins here, I really hope we get a fight of the year worthy performance out of these two, it's time the less knowledgeable MMA fans learn exactly why so many hardcore MMA fans love these two guys. Alvarez by decision

This is an interesting match up. Nate has been an active fighter for a very long time, where as Kelvin is a strong prospect coming off his first loss. Kelvin is also going up in weight after not being able to make 170 consistently. It'll be interesting to see if this move up doesn't actually help Kelvin perform better. Style wise it seems like Kelvin's fight to win. His strong wrestling and improved standing should be enough to wear down the aging Nate into giving up a decision.  Gastelum by decision

Picking Gastelum: All of us
Picking Marquardt: none

Uuummm, who are these guys? Why am I paying to watch them? These are completely understandable questions to have when this fight is on the main card of a PPV. Both guys have fought in the UFC before, but I personally don't remember their fights. I don't want to hate on them too much though, it's not their fault they were placed on the main card. I guess I'm more questioning the UFC and Joe Silva. They are the ones telling me these guys are worth my hard earned money. Well, lets hope they prove themselves worthy. Rosa by decision

Tecia Torres was a strong contender going into TUF 20 where as Angela Hill was fairly unknown at the time. Tecia didn't really impress too much on the show lossing twice. However her run in Invicta was very impressive and she needs to get back to preforming like she did there. Angela Hill has shown she's someone to keep an eye on, but I feel Tecia has fought and over come the better competition. Style wise Angela might be able to give Tecia problems with her wrestling, but I feel Tecia will be able to get the win here. Torres by decision