A postmortem on my UFC Fight Night 68: Henderson vs. Boetsch picks

For those of you who are thinking about writing blogs I have a very important lesson for you.  It's pretty important to remember to actually hit the "publish" button after you finish writing the blog.  Because I forgot that key step the fight predictions for this past weekends card was never posted.  I've had better moments.  However, this is a special opportunity.  After writing a predictions post I pretty much never look at it again and never look back to see what I specifically wrote about a particular fight.  With this card, I was particularly ballsy with my predictions and that blew up in my face to a tune ZERO fight picks going my way.  Ouch.  As a result this "prediction" article that I wrote last week for the card that aired this past Saturday has morphed into a postmortem on how horrible my fight picks were.

Let me tell you right now.  This fight will be trash.  While I hope Henderson will be smart and throw some jabs and disguise when he'll throw the right he's not going to.  At this point in his career and given his age, Hendo will spend the fight loading up on his overhand right and continuously trying to land the homerun shot while going at a deliberate pace.  Henderson has been TKO'd his last two fight and Boetsch is a large middleweight with power.  While Henderson's recent losses have been to top-tier talent, I think we see him lose to a lower caliber opponent, with Boetsch able to avoid the power shot, staying out of range of the overhand and able to clinch and get in some uppercuts if Henderson gets too close.  Watch closely my friends, we might be seeing a legend in the ring for the last time.  Boetsch by unanimous decision.
Boetsch: Gooms
Henderson: Kid Presentable, DJ Mark, Dr. Law

Actual Result-Hendo by H-bomb.  Well I was alone on the island picking Boetsch.  Waxed poetic on how Henderson's days as a good fighter were finished.  I underestimated the old man which is never a good look.

This is one of those times I don't understand the antiquated notion that the heavier weight class has to be the main or co main event.  Dustin Poirier is much bigger name than either of these two....AND IS FROM LOUISIANA WHICH IS WHERE THEY ARE FIGHTING!!! I'm not going to spend much time on this fight.  It's two heavyweights who knock guys out and this fight should be entertaining just on that.  Mitrione's athleticism should allow him to get the better of exchanges in the center of the ring and in the clinch.  Mitrione by KO in 1st round.
Mitrione: Unanimous
Rothwell:

Actual Result- Mitrione stupidly goes for a double leg and gives up the easiest choke ever.  In fairness, Matt was doing a good job of keeping the distance.  But I forgot to take into account his head is filled with rocks.  I stand by this shouldn't have been the co-main event though.

Good chance this is the Fight of the Night.  If there were any questions about Poirier moving up to lightweight, he silenced all of those questions when he starched Carlos Diego Ferreira in his last fight.  Medeiros has really started to build some momentum, winning his last two bouts by submission, and trains out of Stockton with Melendez and the It's MMAzing favorites the Diaz brothers.  Poirier looked good in his last fight which could be attributed to not having to make the brutal cut down to 145.  With his all-around game and a much more refreshed body not wracked by dehydration, Dustin will be a load to deal with. I'm going against my head here, but my gut tells me Yancy wins this potential barn-burner.  Medeiros by TKO in 3rd round.
Medeiros: Gooms
Poirier: Dr. Law, DJ Mark, Kid Presentable

Actual Result- Poirier Starches Medeiros.  Fuck me I have to stop picking Cesar Gracie fighters.  Poirier's power in his higher weight class looks legit after knockouts in two straight fights.  Deserves a top-ten guy in his next fight.

Fight here where both fighters have tested positive for steroids.  Rumblings abound that this kid Ortega could be something big, but I don't think he takes that step forward in this fight.  There're both good grapplers and by sheer familiarity with Tavares and his more robust experience, I'm picking the vet.  Tavares by split decision
Ortega:
Tavares: Unanimous

Actual Result-Ortega by submission late in the third.  Great fight.  Ortega looks legit.  Faced adversity in the first and second where he spent portions of those rounds on his back.  But looking at Tavares' face you would assume Ortega was the one with the dominant position.  I haven't seen someone do that much damage from the bottom in a long time.  The kid looked great in his second fight in the UFC and looks like a potential title contender.

Last August Soto stepped up in a huge way, coming in the last minute to fight TJ Dillashaw and fought well before getting knocked out in the 5th round.  For the purposes of making this prediction I am not going to assume that the champ was underachieving during the fight, but assume that Soto was able to push the champ into the 5th round.  With that mindset firmly in place, Soto has also been champ with two different promotions and has strong wrestling. Soto did well against the champ on about a day's notice. It will be interesting to see what he can do with a full training camp.  Soto by unanimous decision.
Birchak: Dr. Law
Soto: Gooms, DJ Mark, Kid Presentable

Actual Result-Birchak by another KO. I am so happy I didn't do draft kings this weekend.  It would not have been pretty. 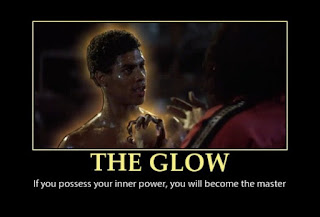 Rivera is coming off a loss to Urijah Faber where an eye-poke led to a submission loss and Caceres has lost two in a row.  Rivera is one of the hard hitters in the division so while Caceres has very entertaining stand up with his kicks, he would be wise to get this to the ground.  Wouldn't be surprised if Rivera finishes it in the first round, but I don't pick against Bruce Leeroy.  By the way if you haven't seen "The Last Dragon" you need to stop by your nearest DVD bargain bin and pick it up.  Caceres by the glow in the 2nd round.
Cacares: Gooms, Dr. Law, Kid Presentable
Rivera: DJ Mark

Actual Result-Rivera with some sweet fist on chin music.  This one really upset me because I'm starting to lose hope that Cacares will eventually develop into a player at bantamweight.  He lost so early in the fight and I can rationalize that anyone can get caught early in a fight like he was.  We don't even know if he would have implemented a smart game plan or not since before you could the nachos from the kitchen the fight was over.

So there you have it folks.  Not the greatest weekend for Lavender Gooms fight picks.  All this means is I'll be perfect on my UFC 188 picks
By Lavender Gooms