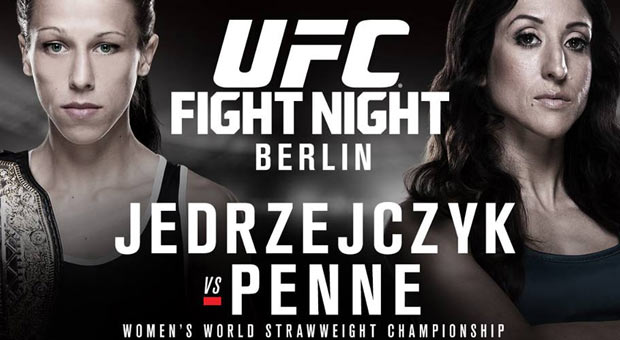 The UFC returns to Germany with a Fight Pass card headlined by a championship fight for the first time in the online service's history. The main event has UFC Women's Strawweight Champion Joanna Jedrzejczyk taking on former Invicta Atomweight Champion Jessica Penne. The co-feature is a bout between Tatsuya Kawajiri and Dennis Siver at 145 lbs. The rest of the card...is not great. Regardless, check out our picks.

The first UFC Fight Pass event with a title fight will showcase the UFC's first ever Women's Strawweight Champion. Joanna Jedrzejczyk AKA Joanna Champion (of both the UFC and my heart) will defend her title against Jessica Penne. This past March at UFC 185 we saw Champion (hell yes I'm calling her that) become the star of a PPV that included Anthony Pettis, Johnny Hendricks and Alistair Overeem. She did this with her hilarious pre-fight trash talk and intense staredowns. Oh, she also beat the crap out of the defending champion, Carla Esparza. This is a tall task for Jessica Penne to overcome. In you're an inferior striker, beating Champion likely depends entirely on your ability to take the fight to the ground. If Esparza couldn't get Joanna down, it's hard to imagine that Penne will be able to. I think Jedrzejczyk will light Penne up like a Christmas tree and the fight will be over within 7 minutes. Then again, I picked Cain to beat Werdum so what do I know? Jedrzejczyk by 2nd round KO.

Jedrzejczyk: All of us
Penne:

Some good old fashioned veteran featherweight violence taking place in the co-main event slot. Tatsuya Kawajiri is coming off of a loss to Clay Guida that snapped his win streak at six. This is his third fight back in the UFC and so far the promotion has sent him to Singapore, Abu Dhabi and, now, Berlin. Besides racking up frequent flyer miles, Kawajiri appears to have extended his career by moving to 145 pounds. The same was likely the goal of Dennis Siver when he left lightweight back in 2012. The only German-Russian in the UFC, Siver is coming off a completely physical and verbal beatdown at the hands of Conor McGregor. He has had mixed results at featherweight and appears to be slowing down. That doesn't mean this is going to be an easy fight for Kawajiri. Despite the fact that we all picked the Japanese MMA veteran, Siver is the favorite in this one. I expect a knocked-down drag-out fight that goes to decision. Kawajiri by decision. Two rounds to one.

Kawajiri: All of us (incredibly)
Siver:

Let me put this on front street, I'm picking Sobotta because he was in one of the UFC video games. I honestly can't tell you which one, but I do remember seeing him and saying "why the hell is this guy in the game?" Sobotta is coming off of his first UFC fight and win over Pawel Pawlak. Kennedy is making his UFC debut and is coming off of 7 straight wins on the Austrailian MMA scene. Sobotta wins this one, I guess. Also, I now realize I might be confusing him with a different German UFC fighter that was in the UFC video game for no reason. Pascal Krauss maybe? Sure, let's go with that. Sobotta by decision.

Hey, did you guys hear about the Golden State Warriors? They won their first NBA Championship in about 40 years. Life is pretty great here in the Bay Area. Also, Sajewski by submission (I felt bad picking 3 decisions in a row).

First off, I don't think this fight is actually going to happen. Bellator is kidding themselves if they don't have another on standby ready to go. Oh snap, look who's already in St. Louis. That's right, The Silverback himself, Seth Petruzelli. I probably wasted all my good will with the Almighty praying, wishing and hoping for a Warriors championship, but if I got any left, I'd like to use it on Petruzelli having to step in on short notice to fight Kimbo again. Assuming that doesn't happen, I feel weird picking the 51 year old man in a fist fight, but I'm hoping that Shamrock plays it smart and takes Kimbo down. Also, if this fight goes passed 5 minutes you're going to see both competitors hilariously exhausted. Shamrock by 1st round submission or, God willing, Petruzelli by 1st round KO.