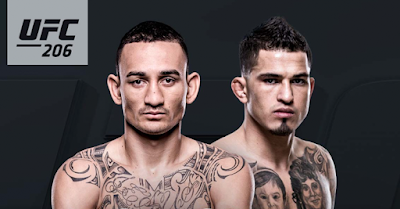 Oh UFC 206 how I wish I could love thee justly. But alas, your foibles loom too large, but most none of it is your fault as fighters. Don't get me wrong, as a Fight Night or a Fox card, this event is great. We have divisional relevance, the long awaited return of high level contenders, but this event is not what you call Pay-Per-View worthy. And that was all before #BeltGate. I have seen many Conor detractors relish in him being stripped of his belt. Many outcries of "well you can't hold up the division" or "he took three fights outside the weight class!" and those are all fair, but none of those factors change the simple truth that Holloway and Pettis would not be fighting for a belt if it were not for the injury of Daniel Cormier. The timing stinks. The reasoning, truly short-sighted. The real reasoning, not the perpetual lies of one Dana F. White. I get he's a promoter, but years of following this sport has made me weary of his partial truths and blatant lies.

And now we have a late update (edit) from Doc Law himself that Mr. Tony Pettis has missed weight. Now it was REALLY worth it to strip Conor in some futile hope of salvaging this card right? A man who was 1-3 in his last four fights may have become a champion... and now he might still knock out a title challenger, but not be champion for it. Ladies and gentlemen, this is 2016.

I had some real analysis for this fight, but the recent break of Pettis missing weight and this pointless interim title fight now being a non-interim title fight... to quote Comic Book Guy, there is NO emoticon for what I feel right now. You heard it on the podcast, I am a heavy lean on Holloway from the start as he brings a power and style that I think could shutdown Pettis. Pettis is an always dangerous striker in his own right, but that post-championship skid really makes you sour on a guy. Now the weight thing. Part of me just wants the full chaos of Pettis winning so maybe, just maybe, the UFC will realize the error of their ways, but it's 2016 and I'm not meant to be happy. Holloway has been absolutely devastating since his loss to Conor, and I expect the Hawaiian tide to keep rising. Holloway by unanimous decision.

What's up with the eye space cowboy? Long-con prank, or has your dare-deviling during fight prep caught up to you? Uncomfortable recent MMA union media aside, we have a great action fight, but might prove to just be a blink of an eye. The always game Matt Brown started showing his age by losing to the always-on-the-verge-of-being-cut Jake Ellenberger, while Cerrone has seemingly shed the slow starter narrative that had carried through most of his career. Combine that Cerrone is known to throw body combos and heavy kicks, the historically susceptible Brown could have a very painful evening on his hands. Cerrone by TKO round 1.

My apologies for teasing Superboy. It's all in love though, cause the recent chaos at the top of this card may just pave the way for him to jump ahead in the title fight line. Cub is a great fighter, and always comes to fight, but I expect him to look a step slow against Choi. I believe Choi is here to stay, and that he matches up well with the top of the division. If Choi additionally shuts down the grappling game of Swanson, I think that will speak volumes toward just how ready he is for that big shot or not. Superboy by KO round 1.

I wasn't as solid with my pick of Kennedy until I heard DJ Mark break down the fight. He reminded me just how high level Tim Kennedy has been in his career. Holding a victory over the current champion on top of "probably should have won" status if it were not for the bonkers series of shenanigans against the likely next up contender, Yoel Romero, speaks volume to the level that this guy has fought at. My hesitation largely stems from believing or at least wanting to believe in Gastelum as a prospect. The skill set and talent is there, but he seriously needs to refocus and recommit himself if he wants to realize that potential. Kennedy by unanimous decision.

In a division that is a gaping void of prospects and up and comers, or even new blood at all... why not match up two of the few folks that could qualify as such. Particularly two European ones, of minimal name value. One will rise, one will get buried, but either way, not by that much. Joe Silva, can you call someone and tell them they messed up? Oh well, should still be a good fight. Misha definitely has the look that makes you believe this guy could be someone, but he just hasn't faced any recognizable competition. This fight is an absolute coin toss to me, but more than anything I'm hoping that win or lose, these guys just actually look like the prospects we need them to be. Krylov by submission... something in the something round.