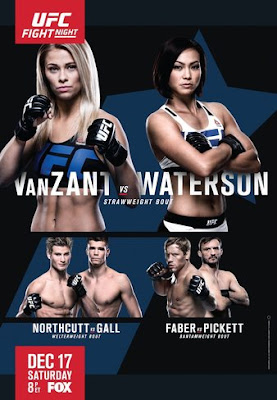 The UFC returns to Sacramento California but this time they're in the new Golden One Center instead of the aging Sleep Train Arena (formerly Arco Arena). I only mention this because I used to live in Sacramento and have found memories of the old Arco Arena. I'm excited to see this new Golden One Center and luckily my excitement only grows as me and the rest of the It's MMAzing crew (minus "I think I'm turning Japanese" Lavendar Gooms) will be in attendance. We also happen to have a hell of a fun fight card in front of us, headlined by Dancing with the Stars runner-up and overall tough cookie Paige VanZant when she takes on Ninja Warrior contestant Michelle Waterson. We'll also see MMA legend Urijah Faber's last match as he'll be riding into the sunset, hopefully with a nice win. In addition we'll also see Sage Northcutt, Mickey Gall, Brad Pickett and Mike Perry.

This is honestly a really fun and tough matchup that can really go either way. Paige VanZant has more fights in the UFC but overall is less experienced then Waterson. Waterson is coming off a solid UFC debut against Angela Magana where she was able to finish her with a rear-naked choke and VanZant is coming off a very impressive KO over Bec Rawlings. Both women are pretty well rounded having a mixture of KOs and submissions under their belts. This one is a real pick'em fight, they match up well against each other, but I personally feel Waterson is a little bit better at striking but VanZant might have the better clinch game of the two. I'm going with Paige on this one, but really I'm more confident that we'll see a really competitive and close match. VanZant by TKO (Ground and Pound) 4th round.

This is another really exciting, but tough to call fight. Sage Northcutt has had some really impressive performances within the UFC, but so has Mickey Gall. Gall might only have three fights but you can already see a pattern, dude finishes people with the rear-naked choke. Northcutt on the other hand is a fantastic striker who also knows how to finish a fight with a submission when the opportunity presents itself. To me this fight is going to be all about the distancing. Northcutt has to keep Gall on the outside, fending off a variety of kicks and punches to be successful. Gall on the other hand has to get the fight to the ground, if he can do so I think he'll be able submit Northcutt without to much trouble. I think Gall has a great shot in this one, but I'm weirdly banking on Northcutt being able to keep Gall on the outside and get the win standing. Northcutt by Decision.

As I mentioned before this will be Faber's last fight, and it's so fitting he'll finish out his career in Sacramento. Faber is basically a local hero in Sacramento and while it's sad he'll be leaving the sport after this fight he has a great chance of retiring off a win. Brad Pickett is a talented fighter and can totally get the win here, but I feel if Faber is focused he has a couple different avenues to victory in this one. Faber's best chances of winning are if he can get Brad against the fence and engage him in a grappling match and use scrambles to get in good finishing positions. If he can't do this and has to stand and trade with Pickett I think he could hold his own and maybe even win that way, but it'll be Pickett's best chance of sending Faber back home with a loss. Faber by Decision.

Rounding out the main card we have another fun match up where we'll see a UFC veteran in Alan Jouban take on the hot new prospect that is Mike Perry. Perry has a ton of momentum going into this fight winning all nine of his MMA fights with KO or TKO finishes. He's also become somewhat of a controversial figure given some of his corner's remarks while he was making his UFC debut against  Hyun Gyu Lim. The Lim fight is the main reason why I'm going with Perry on this one. Lim is a really tough out for anyone in the division and not only did Perry beat him, but he made it look easy. Jouban himself is a good solid prospect, but it's really hard to go against someone with the record and finishes Perry has shown in his few UFC fights so far. Mike Perry by TKO 2nd round.