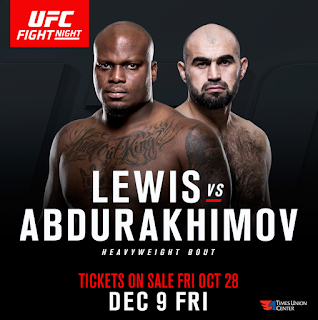 People of Albany. Get hyped! The UFC is coming to town for the first ever with...oh no. What the hell is this? This is a UFC card? Are you serious?! What the f*ck?!

Alright, I've calmed down a bit. Let's look at the bright side. You have 2 heavyweight fights and 2 light heavyweight fights on this main card. The fight card is also on Fight Pass. That means there's an avenue here where this will be a very violent and short evening. Sh*t if the main card starts at 10pm ET, there's a real possibility you're at the bars by 11:30.

Picking The Black Beast: All of us
Picking the other guy:

The moment on the podcast where we realize that the large jacked man with the Predator haircut is actually nicknamed "The Predator" was an all-time classic It's MMAzing Radio moment. Excellent 80's movies aside, Francis Ngannou appears to be one of the few prospects in the UFC heavyweight division, even though he is 30 years old. The average age of the UFC heavyweight top ten is roughly 67 years old. Ngannou has looked like an absolute killer since he's joined the UFC and is basically must watch television at this point. Anthony Hamilton has been a favorite of mine basically because he shares a name with an excellent R&B singer. The problem is that six fights into his UFC career, I still can't tell you anything about him besides that. He tends to trade wins and losses and if we're all being honest, the UFC isn't expecting him to get the job done here. Ngannou wins by 2nd round KO.

Back to Predator (the movie) for a moment. Watch the embedded video. It's fantastic.

I can't emphasize enough how much I like Sean O'Connell. He basically does all I could basically ask for in a mid to low tier UFC fighter. The man is entertaining as hell before the fights. Check out his weigh in compilation video embedded here. That is some excellent stuff from a guy almost always on the preliminary portion of the card. He's also just a straight up brawler when he gets in the cage. His fight with Steve Bosse is an all-timer when it comes to violence. I really hope he wins this fight, especially given his recent comments to MMA Junkie, but I don't think he gets it done here. Corey Anderson has a few too many skills and is pretty good at avoiding a brawl. I think "Beastin 25/8'" will make it an ugly, possibly unpleasing fight, but get the job done ultimately. I hope I'm wrong. Anderson by decision.

Picking Beastin' 25/8: All of us
Picking O'Connell: