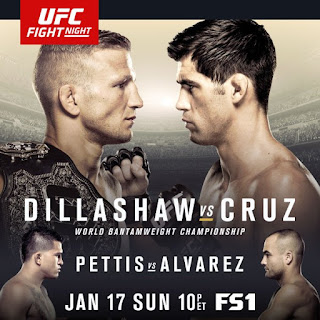 The former champ returns to take what he never lost. A wild battle of top 5 lightweights. The big boys throwing down at heavyweight. All of that and more taking place on this special Sunday UFC card. Check out our predictions below.

We are only a few days away and I'm still not convinced this fight is going to happen. You can't really blame me, Dominick Cruz has 4 leg injuries in the last 4 years and has only fought once in that time frame. Regardless, the man who never lost the bantamweight title in the cage returns to reclaim what was his against a surging TJ Dillashaw. In Cruz's absense, Dillashaw has managed to take the UFC bantamweight title off of a very tough champion in Renan Barao and do so with a style that appears to borrow heavily from Cruz's movement-heavy approach. This is a very tough fight to call, but I'm going with Dominick Cruz. He has managed to convince me that ring rust wont be an issue and I remember his fights from before the injury. In a nutshell: he hits you and you can't hit him back. Dillashaw has been great, but I think Dominick solves the puzzle. Cruz by decision.

This is a matchup that would likely be for the #1 contendership in the lightweight division if McGregor Promotions wasn't running sh*t these days. Anthony Pettis returns from a 10 month layoff where he tries to make us all forget about the 25 minute beatdown current lightweight champion, Rafael Dos Anjos. Eddie Alvarez bounced back from a tough loss to Donald Cerrone by taking a split decision over Gilbert Melendez. Alvarez's action first style has always made him a fan favorite, but I think Anthony Pettis might be on a different level than him. Not having your defenses up against Pettis is a quick way to get your dome kicked into the 3rd row. Pettis by 2nd round TKO

You can count on the UFC always throwing a random heavyweight fight on a main card. At least in this case, we have some relevant guys. Travis Browne begins the new chapter of his career being known as Ronda Rousey's boyfriend. He's also trying to bounce back from a crazy loss to Andrei Arlovski. Matt Mitrone is laying his balls on the line with this fight. The last fight on his UFC deal and the UFC didn't do him any favors (f*cking shocker). I really want Mitrone to win and make the UFC pay a boatload to resign him, but I have to go with Browne. This wont take long. Browne by 1st round TKO.

I've seen Trinaldo fight about 5 times and I have no memory of any of those fights. Looking at Ross Pearson's record, I clearly have an inflated opinion of the man. That's not going to change here. I'm going to continue to assume thar Ross Pearson is way too good to lose to the guys he fights. This one will go the distance, but "The Real Deal" (terrible nickname...you aren't Holyfield buddy) takes this one. Pearson by decision.

A couple of UFC veterans going in there and trying to convince us all that it's 2008 all over again. I'm picking Ben Saunders because he seems like a good guy when I hear him on Rogan's podcast. Also, I'm not sure Cote isn't 45 years old. Saunders by decision.