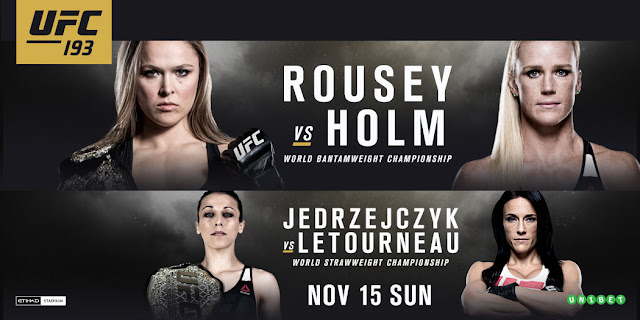 The queen of mixed martial arts is back and ready to defend her championship. Fresh off of being on the cover of every God damn magazine still in circulation, Ms. Ronda Rousey defends her bantamweight championship against multiple-time (how about 10? Does that sound good to you guys? No? How about 12?) boxing champion Holly Holm in front of 55,000 plus screaming Aussies. We also have another title on the line in the co-main event where Joanna "Champion" Jedrzejczyk defends her UFC strawweight championship against Valérie Létourneau. Check out our predictions below.

This was a match-up that we all expected to see one day, but probably all now think that it's happening too soon.  Honestly, there is no amount of time we could wait for me to think Holly Holm has a snowball's chance in hell of defeating Ronda Rousey. This isn't meant to diminish Holly's skills. She is a talented striker that won numerous (I'm still not sure of the number) boxing championships. That being said, she appears to be lacking knockout power in her hands. That's a serious problem. Her path to victory is winning three rounds and that's just not going to happen. Realistically, she's getting tossed ass over teakettle very quickly. Ronda is best female fighter in the world. Period. She wins this fight by submission in under two minutes. Rousey by 1st round armbar.

Picking Rousey: All of us
Picking Holm:


Created by /u/noise_filter (IG: proxyrax) on 7/14/15This animation was created as humorous fan art and parody. It is not for profit or commercial use.

This one is going to be a slaughter folks. I'm going to predicate that for every fight that Joanna "Champion" has until the opponent reads "Claudia Gadelha." That is the fight we all want to see at 115 pounds. Until then, we will have to do with Ms. Jedrzejczyk styling all over Ms. Létourneau in front of 55,000 Aussies. Joanna comes into this fight off of a complete drubbing of Jessica Penne. It was like a horror film out there. Létourneau is coming off of a hard fought win over Maryna Moroz, a fight in which she struggled to make the 116 pound weight limit. I don't see how Létourneau wins this fight, but that's ok. Watching Joanna "Champion" is an absolute delight. Joanna's going to hit Létourneau with everything under the sun and end this fight by 2nd round TKO.

Picking Jedrzejczyk: All of us
Picking Letourneau:

A rematch of the best heavyweight fight ever in mixed martial arts. Sure, why the hell not? I know some people will say that they don't want to tarnish their image of the first fight, but those people are idiots. These are two separate fights. Treat them as such. Mark Hunt is coming in off of getting beat up by Stipe Miocic while Bigfoot Silva saved his career in his last fight with a win over Soa Palelei. In their first match-up, neither man was able to put away the other despite landing huge shots. These are the two same men. They've changed; notably Bigfoot, who can no longer use TRT. Also, images like the one to the right should terrify people. Mark Hunt is training HARD at AKA Thailand. Hunt wins by 3rd TKO.

Picking The Super Samoan: All of us
Picking Bigfoot:

Two young middleweight trying to figure out which one inches closer to the top five of the weight class. Uriah Hall is coming off of what was by far the biggest win of his career. Hall spinning heel kicked Gegard Mousasi in the face and won by 2nd round TKO. This was the exact type of win Hall needed to get over the hump...hopefully. Hall has always had all of the potential in the world and lacks no physical tools. It's a matter of getting his head right. Whittaker is coming off a 44 second knockout of Brad Tavares. This was Whittaker second knockout in two fights at middleweight. This is a very close fight, but I really think Hall has turned a corner. He's going to outstrike Whittaker here on pace to a late finish. Hall by 3rd round TKO.

Why is this fight on the main card? I feel Jared Rosholt keeps getting bigger and better opportunities to bore us. Don't get me wrong, Rosholt is a fantastic wrestler and a great athlete. That being said, the man has zero finishing ability (or interest for that matter). For him to win this fight, he needs to take Stefan Struve down and grind him for three rounds. For the sake of entertainment alone, we should all hope for a Struve victory. Say what you will about the man, but Stefan Struve doesn't have boring fights. The man goes for it. I think he manages distance decently well and keeps it on the feet for three rounds and picks Rosholt apart. Struve by decision.