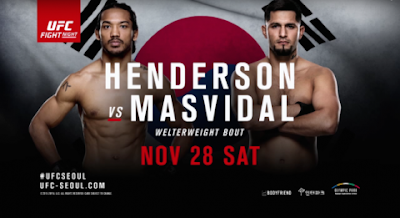 This Fight Night in Seoul, South Korea has seen a few of changes over the last couple of weeks but remains a fairly solid main card. While a few big names like Mikro Cro Cop (who first retired from MMA then later failed a drug test) and Thiago Alves will be missing there's still a handful of interesting match ups. Former lightweight champion Benson Henderson meets Jorge Masvidal at welterweight, South Korea's own Dong Hyun Kim and adopted son Sexiyama will be in action. In addition to that there's also a really fun fight on paper when Doo Ho Choi squares off with heavy hitter Sam Sicilla.
Benson Henderson v. Jorge Masvidal

Originally scheduled to face off against Thaigo Alves, Benson now has to contend with the very technical Jorge Masvidal. This could turn out to be a methodical, but all be it, slow paced fight. I envision Jorge taking the center of the octagon while Benson uses his footwork to stay on the outside and pick his shots very carefully, most likely using his big leg kicks to slow Jorge in he later rounds. Benson has shown in the past to be able to dictate the pace of a fight and steal rounds away by outpointing his opponents while they desperately chase him around the octagon. Masvidal is a very smart fighter and he'll need to cut off Benson circling to be able to do some real damage, I'm just not totally confident he'll be able to do that. Benson by decision.

Originally Dong Hyun Kim was suppose to face Jorge Masvidal, but the bouts had to get shuffled and now Dong Kim is facing Dominic Waters. Truth be told I honestly just don't know much about Dominic Waters, so I can't really go into details about how I feel he'll preform against Dong Hyun Kim. I am however very familiar with Dong Hyun Kim and his new adopted style of really going out there to finish fights. Kim is going to put a lot of pressure on Waters and it'll be very interesting to see how Waters handles that type of aggression. Kim's new style of fighting does leave him a bit more open to counter attacks and could be exactly what Waters needs to score a fairly decent upset. That being said I think Kim gets the finish in this one. Dong Hyun Kim by 2nd round TKO.

Much like the previous fight, I'm not too familiar with Akiyama's opponent Alberto Mina. Akiyama on the other hand is a huge star in Korea and Japan, having fought in many of the biggest MMA organizations in the world. However, his stint in the UFC has been far from ideal, having lost four of his last five fights. Akiyama is a top tier judoka and has good punching power, Mina will need to avoid getting into a slugfest and the clinch with Akiyama to be successful, but I personally just don't see him winning this one. Akiyama by TKO.

This fight on paper should be a really entertaining war. Both Doo Ho Choi and Sam Sicilla are heavy hitters who do there best work when they are in the pocket letting their hands fly. The UFC knows this as well and has been trying to match these two up for a while now. I've only seen Doo Ho Choi in action once, but he showed the world he can end the fight with one punch when he beat Juan Puig and his record shows that most fighters don't last long against him. From a fans perspective this could be the Fight of the Night and it's the fight I'll be looking forward to the most. Doo Ho Choi by TKO 1st round.