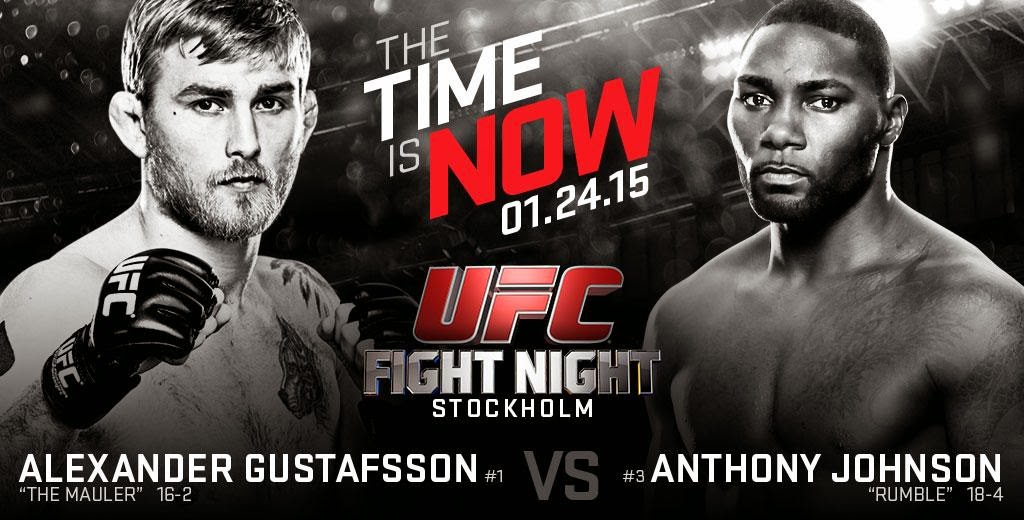 The UFC returns to network television with a main card taking place in Stockholm in front of a giant venue full of sleep-deprived Swedes. If they're lucky, they'll see their countryman Alexander Gustafsson earn himself a rematch with Jon Jones. Anthony "Rumble" Johnson however, has designs on knocking The Mauler's block off and taking the title shot himself.

Did you listen to this week's episode of It's MMAzing Radio? If you didn't, well, screw you. If you did, you're well aware of my internal struggle regarding this fight. This is a very close match-up and I want very badly to pick "Rumble," but I can't bring myself to do it. Gustafsson versus Jones just needs to happen. Don't get me wrong, so does Rumble versus Jones, but now is clearly the time for Gus/Jones II. Gus got so close to taking the title from Jones back and UFC 165 and it's time to see if Jones really too him as lightly as the rumors suggest. The need for that rematch aside, I think Gus is going to be able to stick and move well enough to win this fight. Gus has fantastic movement and pinpoint striking. Rumble hits hard and is terrifying in general, but I think Gus can avoid the big shots for the first few rounds. The pace he'll set will eventually slow Rumble down. Gus takes a hard fought decision here, but I really hope I'm wrong. Gustaffson by decision.

This fight seems pretty damn unnecessary. It's clear that Hendo needs to be on the "Fight Other Old Dudes" tour, but the UFC has decided to book him against a young, hungry title contender. Also, middleweight has not been Hendo's stronger weight class historically. All signs really point to a sad, sad evening for of us old school fans. Mousasi is going to beat Hendo and it won't be close. Mousasi by 2nd round submission.

Father Time's Father:
Sweet 'n' Sassy Mousasi: All of us

A battle of two light heavyweights who have (so far) failed to live up to the expectations the MMA public had for them. Both Davis and Bader were expected to UFC title challengers if not champions at this point in their careers, but neither has made enough strides. Davis has been unable to get truly comfortable on his feet while Bader's defense still leaves a lot to be desired. This likely won't be the most exciting affair, but I think Phil Davis is going to be able to get some takedowns and grind out Bader. Bader will survive, but that's the best we'll be able to say about his performance. Also, remember when he lost to Tito Ortiz? Davis by decision.

Wow that's quite a drop off from the top three fights. Oh well, they all can't be winners. That being said, this fight should provide some pretty solid violence to kick off the evening on Fox. Akira is tough, but he has a bad habit of not protecting his chin. Sicilia is going to find it. Frequently. Sicilia by 2nd round TKO.

His real name is Hamid Khorassani:
DJ Mark's Favorite Fighter: All of us