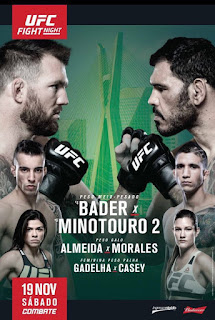 Rounding out UFC's double header this weekend is a rematch between Ryan Bader and Antonio Nogueira that took place way back in 2010. Honestly, the fight seems kinda random since their last encounter wasn't all that close and there's not a lot, if any, fan outcry to run this one back. Seems more of a case that we might have finally ran out of options for guys in the light heavy weight division. The rest of the card leans heavily on popular Brazilian fighters defending their Sao Paulo turf  against invading foreigners. There's some good names on the card but most of the fights seem a little one sided and not horrible compelling, all the more so riding on the coattails of the awesome 205 card we just had last weekend. Never the less it's always nice to see the likes of Thomas Almeida, Claudia Gadelha, Thales Leites and Manny Gamburyan.

As mentioned before, this is a rematch from 2010. Despite 6 years passing, I don't see the outcome being much different then it was the first time. Back then Bader got the decision win and he's probably gonna win this time around as well. Since it's now going to be a five round fight I think Bader will be able to stop Lil Nog before we hear the final bell. Even though Lil Nog had a pretty good performance against Patrick Cummins in his last outing, I still question how much more Lil Nog has in the tank. Bader on the other hand was having a hell of a run towards the belt until he faced Anthony Johnson. Since that lost he had a fantastic KO win over the heavy handed Ilir Latifi and still very much seems in the running for the belt. Bader will have the power advantage over Lil Nog in all areas and I'd be surprised if Lil Nog could make it to the judges. Bader by TKO 3rd round.

Bader: All of us
Lil Nog: none

Thomas Almeida is always fun to watch. He is coming off his first career loss so I imagine he'll be highly motivated to correct the ship here against Albert Morales. Morales has only had one fight in the UFC which ended in a draw against Alejandro Perez. This should be a good fight for Almeida to get back in the winning circle with a good performance against a decent up and comer. Almeida by 1st round KO.

Almeida: All of us
Morales: none

Much like the Almeida fight, I feel this is a good match up for Claudia to bounce back to her winning ways. Claudia's last fight was a hard fought loss to Joanna 'Champion'. I don't know too much about Cortney Casey, but I know for a fact she's not as skilled or dangerous as Joanna. Claudia should be able to get an impressive win in this one, but look out for Casey to raise her own standing if she can hang with the #2 fighter in the division. Claudia by decision.

Casey: none
Gadelha: All of us

This could be one of the more competitive fights on the card. Leites was on a really good run until he dropped fights to current champion Michael Bisping and then Gegard Mousai. Since then he's bounced back with a solid win agaianst Chris Camozzi. Jotko on the other hand is on a four fight winning streak. I got Leites in this one, but don't be surprised if Jotko proves to be a tough out for him. Leites by decision.

Leites: all of us
Jotko: none

Since moving down to bantamweight Manny has been pretty successful, going 2-1 since making the move. Eduardo has gone 2-2 since joining the UFC but both fighters have only dropped fights against the best in their divisions. This should be a pretty close fight, but I'm going with Eduardo mostly because his KO win over Eddie Wineland was very impressive. However, don't be shocked if Manny is able to steal this one away. Eduardo by 1st round KO