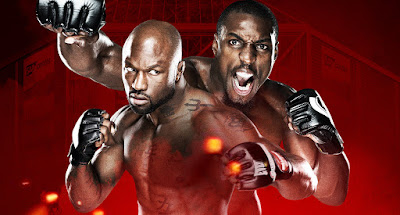 Bellator returns to San Jose to put on another tent pole event; this time headlined by what is essentially a number 1 contender's bout between Muhammad "King Mo" Lawal and Phil "Mr. Wonderful" Davis. The card as suffered some setbacks, but still brings some exciting matchups between Saad Awad and Evangelista "Cyborg" Santos. Check out our predictions below

Phil Davis and King Mo were originally supposed to meet in the finals of the one night light heavyweight tournament held at Bellator's first Dynamite event last September, but Mo tore rib cartilage in his semifinal bout. While King Mo was dealing with the injury, Phil Davis was running through the tourney like damn buzzsaw. Phil Davis smoked Manny Newton via submission, who blamed the loss on having sex 4 hours before the event (congrats on the sex Manny) before scoring a quick KO in the main event over UFC castoff Francis Carmont (Frankie Cars if you listen to the CoMain Event Podcast). Despite the odds being against him, I think King Mo manages to avoid Mr. Wonderful's takedowns and control the striking. It'll probably to the distance though.King Mo by decision

Saad Awad is the man best known for handing the current Bellator lightweight champion Will Brooks his lone defeat. Awad and Brooks both hold one victory and one defeat against the other and you have to imagine Awad wants that third fight to be for the Bellator championship. For that to happen, Awad needs to take down Cyborg Santos. Cyborg is best known for his ridiculous, violent battles (most notably against Melvin Manhoef), but he's coming off a quick victory over Brennan Ward. I still got Awad taking this one. There are just too many miles on Cyborg.  Awad by 2nd round knockout.

Picking Awad: All of us

Local prospect Adam Piccolotti has an opportunity to make a big splash on Spike TV on what is a huge fight for both him and his opponent Ray Wood. We've been attendance to see Piccolotti fight a couple times and he mostly shown an absolutely relentless ground attack. While I'm not too familiar with Ray Wood, we are all seriously disappointed with his decision not to combine his last name and nickname into some sort of phallic reference. "All Business"??? Come on Ray. You can do better than that. In terms of the fight, I gotta go with Adam winning by 1st round submission.

Some of you are going to look at the odds of this fight between two fairly unknown MMA fighters and wonder "how did Dr. Law, DJ Mark and Lavender Gooms all end up picking a guy who is a massive underdog?" A few things. 1. The odds weren't out 2. DJ Mark loves alliteration 3. When in doubt, Mike and I are picking the guy from Cesar Gracie's camp. I really wasn't feeling too terrible about this pick until I realized that while he is 7-1, Reger's victories come against opponents that have a combined record of 15 wins and 45 losses. Because I can't turn back now...Reger by decision.