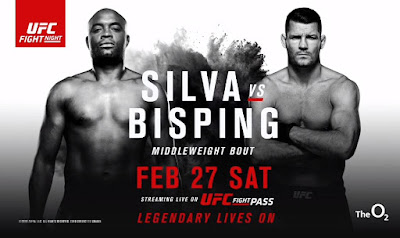 It's finally here folks. A fight that thousands...wait no...how about hundreds?...dozens?...OK it was just me. I called for this fight. Anybody who has listened to It's MMAzing Radio in the past 4 years (anniversary coming up) knows that I've always wanted to see Anderson v. Bisping. So if nothing else, I'm going to be happy. Also on this card we got Sweet 'n Sassy Gegard Mousasi (tip of the cap to the Co-Main Event Podcast) versus Thales Leites. There is also a blue chip prospect and a fun bantamweight brawl to look forward to. Not bad for a Saturday morning card. Check out our picks below.

Mike, Stef and Marc know that I've been talking about this fight for at least the last 8 years. Is it because I thought Bisping would beat Anderson? Of course not. It comes down to this: styles make fights. In Michael Bisping you have the definition of a pressure fighter. Bisping gets in his opponent's face and puts on a pace that they normally can't keep up with. Anderson Silva is the greatest counter striker this sport has ever seen. Do the math. Bisping's aggressiveness is going to bite him in the ass and he's going to get knocked out. Also, Anderson Silva is officially pissed off. Michael Bisping has talked a world of shit and it's finally gotten to Silva. I got Anderson Silva by 2nd round TKO.


A quick note about Anderson Silva. I know it's been quite the fall from grace for the man many consider to be the greatest fighter of all time (at minimum, he's the middleweight GOAT) and this isn't meant to excuse him getting caught with PEDs. However, The things he's been able to accomplish in the octagon have been nothing short of remarkable. He's 40 years old and he can't have many more fights left. I'm going to try to focus on the positives and enjoy watching him compete.

Also, those of you complaining about this fight being on Fight Pass need to keep quiet. Fight Pass is great. Get on board.

Gegard Mousasi went from headlining against Bisping to being the co-main event against Thales Leites. He couldn't really complain; Anderson Silva was taking his place. We last saw Mousasi compete against Uriah Hall where after dominating the first round, Gegard was hit with a highlight reel spinning back kick/flying knee combo. Leites was last seen competing against Michael Bisping in Scotland where he lost a closely contested 5 round decision. Leites has been great since returning to the UFC, but this is a tough matchup for him. Mousasi is an excellent striker and has become extremely difficult to put down unless your name is Jacare. I basically expect Leites to get picked apart in this fight by Gegard's jab. Mousasi wins by decision.

Picking Leites: (crickets)
Picking Mousasi: All of us

Blue chip prospect alert. Tom Breese is 9-0 with 9 finishes in his short MMA career. So far in the UFC he has fought twice, both times getting the victory by 1st round TKO. He's even got a win over Reddit MMA's GOAT Cathal Pendred. Nakamura is 1-0 in the UFC and has nearly 40 professional fights. Let's be honest, he's not being brought to the UK to win this fight. The only thing holding back Breese is...me. Every time I get really behind a guy and start selling him, he invariably loses his next fight. See: Maia, Damien and Scoggins, Justin. So here we are. I'm picking this super prospect to destroy his opponent.  Hopefully I didn't jinx the poor kid. Breese by 1st round TKO.

Picking Breese: All of us
Picking Nakamura:

This fight has barnburner written all over it. Both of these gentlemen are probably well aware of the fact that this fight was put together for the sole purpose of producing fireworks. Brad Pickett hasn't fought since having a fantastic battle with young prospect Thomas Almeida while "Cisco" Rivera was last seen in a 2 minute stand-n-bang battle with John Lineker. I think Pickett is probably about to call it a career. While that normally means bad news for a guy's chances of victory, I think that "One-Punch" has enough to get it done in his home country. I wouldn't be surprised if he picks up the victory and then decides to ride off into the sunset.Pickett by decision.

Mr. Finland goes for his third straight win against Mike Wilkinson. Wilkinson hasn't fought in a looooong time and this is a seriously tough match-up for him to come back to. He does, however, have a win over Amirkhani's new teammate Artem Lobov. This seems like a nice way for Makwan to ingratiate himself with the boys over at SBG. Amirkhani has 2 wins in less than 2 minutes of total fight time in the UFC. Makwan gets it done here by 1st round submission.

Picking Amirkhani: All of us
Picking Wilkinson: