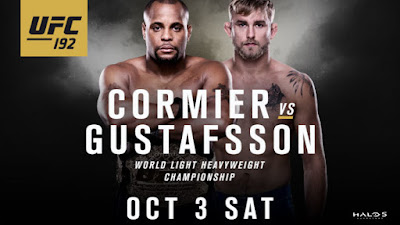 While many fans look at current Light Heavyweight Champion Daniel Cormier as merely a place holder until Jon Jones can return to the UFC, he still has to fulfill his championship duties and defend his belt (disputed or otherwise) against a difficult and game opponent in Alexander Gustafsson. In addition to that fight we also have two potential title eliminators when Johny Hendricks collides with Tyron Woodley and Rashad Evans finally returns to the octagon to take on the rampaging (I can say that because he beat Quinton 'Rampage' Jackson) Ryan Bader.

While many fans my roll their eyes when they hear Light Heavyweight Champion Daniel Cormier, there's no denying that, love it or hate it, he's the current champion. Like a true champion he's been given a difficult challenger in Alexander Gustafsson, who gave former champion Jon Jones all he could handle. On paper it's a really close fight as well. Gustafsson will hold a number of advantages over Cormier, mostly in his natural height and reach advantage as well as his more technical stand up skills. However, these disadvantages aren't exactly new threats to Cormier. As a former heavyweight fighter many of his past opponents have had such natural advantages and Cormier has was able to over come them (except in his only loss to Jon Jones). The key to victory for Cormier is to close the gap while standing, get Gustafsson against the cage and take the fight to the mat. If he can accomplish these difficult tasks, his margin for victory greatly increases. For Gustafsson he needs to use lateral movement in addition to his reach advantage to keep Cormier at bay on the outside. It's a difficult fight to pick, but I feel like Cormier's speed and willpower will allow him to take the fight were he needs it to be to get the win here. Cormier by late submission.

This is going to be a tough fight for both combatants mainly because of the similar skill set they share. Both are high level wrestlers who can also throw fight ending punches. Personally I give a slight edge to Hendricks, I feel like he has the slightly tighter stand up game and Hendricks' south paw stance could present some problems for Woodley as well. That being said Woodley is an extremely difficult opponent for anyone in the division and one slip up on Hendricks part could have him staring up at the lights. Still, I'm going to have to go with Hendricks by decision.

Rashad has been on the shelf for about two years now and I feel it's only natural to question how much that layoff might have affected him. In that time Ryan Bader has been reestablishing himself as a top contender in the light heavyweight division. If there was no layoff I would give the slight nod to Rashad because of his speed and experience, however it's hard for me to side with someone hasn't stepped inside the octagon for this long. I think Bader has all the momentum going into this fight and his self confidence along with improvements in his stand up will be enough to get the victory. Bader by decision.

Seems like you can't get through a UFC PPV card without seeing one random heavyweight fight. Shawn Jordan is coming off easily his most impressive win of his career, winning by hook kick in his last fight. Ruslan, on the other hand, is currently on an eight fight winning streak that includes former UFC champions Tim Sylvia and Ricco Rodriguez. Ruslan should be able to control the pace of the fight and control Jordan to get himself the win here. Ruslan by decision.

This should be a fun scrap between two very tough female fighters. Pena is a berserker type of fighter who overwhelms here opponents with her aggression. Jessica is a more technical stand up fighter. For Jessica to win in this one she'll need to play the matador and try to keep Pena from closing the distance and turning this fight into a slugfest. Pena on the other hand will need to pick her moments, try to cut Jessica off from circling away from the cage and trap her against the fence. I feel like if Jessica can weather an early storm from Pena she might tire her out and be able to put her away late in the fight. Jessica Eye by TKO in the 3rd round.