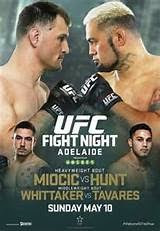 The UFC makes a trip to the land down under which can only mean this card is loaded with as many fighters from countries in the southern Pacific Ocean that they can find.  So put a shrimp on the barbi, grab a Fosters, look out for dingos around your baby and get ready for some fights.

I think Mark Hunt is entering a Diaz brothers level of affection/devotion from me.  Even knowing that Stipe was an All-American wrestler and Hunt is maybe a bit above-average with his takedown defense, I'm going to choose to ignore that glaring detail and say Hunt can keep on the feet and show off those sweet hands.  Hunt by KO in 1st round

Brad Tavares vs. Robert Whittaker
On the podcast I talked about how Whittaker would win.  With a few days to think about it I realize that's pretty crazy.  Whitaker is a good boxer with power, but his clinch game and grappling leave something to be desired and he's going into the octagon against a bigger opponent  who loves to grind.  Tavares will be on Whitaker from the opening bell and not allow him any space to work his striking.  Won't be a great fight to watch but Tavares wins this fight by slightly boring decision.  Tavares by decision.

In his fights in the UFC, O'Connell has shown a tendency to brawl with his opponents.  Makes it great for us fans but that certainly leaves him wide open to get countered.  I normally don't feel good choosing a guy in his 40s to win a fight, but in this case I feel pretty confident that Perosh will get the better of the standup through out the fight.  Never count out old-man strength.  Perosh by submission in 3rd round.

Matthews is a guy to look out for in the coming years.  Big prospect out of Australia.  Big for the weight class and throws heavy punches which combined with his great cardio allows him to still strike with alot of power in the later rounds.  Vick has shown pretty good boxing in his time in the UFC(he should since he's a two time Golden Gloves winner).  I think  Matthews steers clear of dealing with Vick's boxing by working the clinch and getting this fight to the mat and employs some good old ground and pound.  Matthews by TKO in 2nd round.