The card for UFC 184 has gone through a number of changes and most of them weren't for the best. While the card we'll see on Saturday isn't bad by any means, it's not what it once was. That being said what we do have is a solid card featuring a number of the best women fighters the UFC has to offer. It'll also be very interesting to see how well this card does focusing more on women's MMA then we've seen recently. Let's not get ahead of ourselves just yet though; first we need to break down what we'll be seeing Saturday night.

It’s been a long time coming, but finally Ronda will face her long time challenger Cat Zingano. You’d have to be some type zombie cyborg creature to not feel for Cat and all the personal and professional struggles she’s gone through. She has, maybe more so then the others before her, truly earned this title shot. The problem here is that Ronda just seems to be operating on a completely different level then her peers. Every fight she has looked better and better, making it almost impossible to imagine Cat over coming what so many others have failed to do. Factor in that Cat is notorious for starting slow while Ronda actively seeks extremely early finishes and you start to see the writing on the wall. Personally, I really hope Cat can make it out of the first round and really give Ronda a true challenge, but just looking at the fight on paper I think Ronda will be too much. Ronda by armbar round 1. 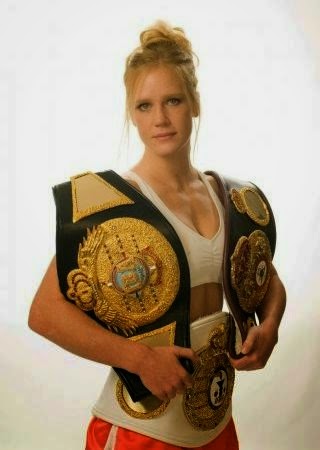 An interesting if not downright surprising co-main Event sees hot prospect Holly Holm get her first crack in the UFC against TUF veteran Raquel Pennington. Some last minute fight changes has catapulted this fight to co-main status and while it might not be exactly worthy of such a hot spot on a PPV card, it’s still a very interesting fight. Holly Holm has been the dark horse in the women’s 135 division since she made the jump from professional boxing to MMA. She’s been getting some good ring time in fighting for smaller promotions, but now she’s in the big leagues in a division that eagerly needs new match ups for their ever so hungry champion Ronda Rousey. I think Pennington is a great first fight for Holm. She’s a very tough and durable fighter who just won’t quit. Skill wise I give the edge to Holm, especially in the stand up. That being said I also didn’t think Pennington was going to win her last fight and she really surprised me in that one getting a tough win over Ashlee Evans-Smith, so I’m not totally counting her out of this one. Holm by decision

This is a tough match to call, but sadly not for the right reasons. Ellenberger is currently on a three fight losing streak, which granted, was against top competition. However it still has to put more pressure on him to win this fight to stay relative and maybe even keep his job. On the other side of the coin we have Josh Koscheck, who I seriously thought had retired. He too is coming off three loses (again against the very best in the division) and over a year layoff, which is a little concerning. Skill wise the two match up fairly evenly, both have a lot of power while standing and both are solid wrestlers. However, I’m giving the slight nod to Ellenberger mostly because he’s been the more active of the two. Ellenberger by decision

Who? What? I’m not going to lie here; I’m honestly just not super familiar with these two fine fighters. During our last podcast I think I picked Walsh just to make it interesting between Doctor Law and myself. Not knowing/caring much about this fight, my expectations are low. this is a great opportunity for one or both of these guys to make a lasting impression. You got my attention boys, make it count. Walsh by luck of the draw.

Previously Ferguson was going to face Yancy Medeiros in what I feel would have been a more entertaining match-up. Instead we’re getting Tibau as a late replacement. I’ve voiced my concerns and criticisms of Tibau in the past, but the fact remains that he’s a more then capable fighter who’s also riding a nice three fight win streak. Ferguson himself is coming off a four fight win streak and has looked impressive doing it. Even though I have been critical of him in the past I think Tibau will be able to get the win here. I’m looking at the Danny Castillo fight, where even though Tony won (somewhat controversially), Danny's ability to hold him down makes me think maybe Tibau can do the same to get what I’m guessing might be a somewhat boring decision. Tibau by decision.