Doctor Law:  Do people really remember the first time these guys fought? I don’t mean the “Showtime kick”…we all saw that. I mean the actual fight. It was one of the greatest fights in WEC history. People seemed to agree that it was even at 2 rounds apiece entering the 5th round, where Pettis sealed the decision victory with the aforementioned “Showtime kick.” It’s going to be ridiculously difficult for those guys to live up to that fight. Still, it should be fairly entertaining. I know Pettis won the first one, but I’m going with the champ here. Sure, most of his wins are close decision victories…but he always manages to win. I think he takes this one either by decision or late round submission.  Also, Pettis lost to Guida…that’s not a good look bro. Let’s go with Bendo by decision.

DJ Mark: This has to be one of the bigger fights we’ve seen in the lightweight division. I don’t feel like I need to describe what happened in their first fight because at this time, I don’t know if there’s anyone who hasn’t seen the ‘Showtime’ kick and that’s all you really need to know about their first fight. Both guys have had good/great runs in the UFC even if Anthony stumbled a bit out of the gates. Overall though I’ve been more impress with Henderson’s performances then Pettis’s. I feel like Henderson should be able to win this fight but Pettis has to have the mental edge knowing that he not only beat Henderson before, he made a spectacle of their last fight. Henderson by decision.

Lavender Gooms: When TJ Grant got hurt and “Showtime” was tabbed as the replacement…I won’t confirm or deny whether an Irish jig was done in celebration.  This is the rematch that everyone has been waiting for since Pettis did his best Ninja Gaiden impersonation all over Bendo’s face in the waning minutes of the fifth round of their WEC title match. Considering how close the first fight was, the key to this fight is one simple question; who has improved the most in the three years since the first fight? Since his loss to Clay Guida, Pettis has looked great in each fight and more importantly, looks better each time out.  On the other hand, Bendo (save a thorough beating of Nate Diaz…..”sigh”) hasn’t dominated any opponents in his title run and arguably lost his last fight.  Granted, Bendo has been fighting the best in his weight class his last six fights and Pettis has beaten the likes of Lauzon and Cerrone.  My heart wants to say that Pettis and his exciting style will leave with the belt, but my plums tell me that Benson’s cardio gets him through another close decision.  Henderson by split decision.

Picking Henderson: All of us
Picking Pettis: We all could look really stupid here

Doctor Law: Frank Mir is on TRT and, to be honest, I’m ok with that for this fight. The reason: Josh Barnett is arguably the king of pissing hot for steroids. This fight marks Barnett’s return to the UFC after an 11 year layoff. Mir is coming off of back to back losses against two of the best heavyweights in the world: JDS and Cormier. I know Mir hasn’t looked great recently, but I think he finds a way to win this one.  I know Josh wins a lot, but it’s not against good people. I think Mir finds a way to get on top of him and submit him late in the fight, when they both will look over-the-hill. Mir by 3rd round submission.

DJ Mark: On paper I think Mir might have more tools then Barnett in this fight. While they’re both best fighting on the ground I think Mir has been more successful there. Also I think he might be physically stronger and hit harder than Barnett. That being said I do think that Mir has a questionable gas tank at times and sometimes I feel like he lacks heart.  Barnett doesn’t give an inch and because of that and their close skill level I expect an awesome fight. Personally I’m also just a big Barnett fan and win, lose, draw, DQ or no contest I’m glad he’s back and I’m excited to see this match and future match ups with him and the rest of the UFC HW roster. Barnett TKO GnP 3rd round 3:44.

Lavender Gooms: Here’s a list of things that were going down in March of 2002; a 16 year old, 100 pound Gooms was wearing ridiculously large 4x t-shirts; R. Kelly and Hova dropped “The Best of Both Worlds and Josh Barnett last fought in the UFC, defeating Randy Couture for the Heavyweight title.  Another person who fought on the prelims of that card was a young Frank Mir.  Had Barnett not left the UFC after that fight, we likely would have seen Mir and Barnett matched up within a few years of that card.  I would normally say that if the fight were to go to the ground it would be a done deal for whoever Mir is fighting.  However, Barnett’s wrestling is good enough that he’ll be able to dictate where the fight goes and the position on the ground he finds most advantage.  Barnett will take Mir into later rounds and finish Mir off late with some ground and pound.  Barnett by TKO in 3rd round. 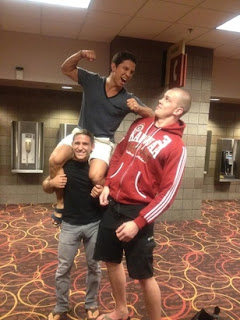 Doctor Law: If you read this site, I assume you listen to the podcast (if you don’t…get it together mother f*cker). By listening to the podcast, you should know that I am greatly looking forward to the absolute ass-kicking Chad Mendes will dish out on Clay Guida. It’s going to be great. In case you’re wondering why I want to see Guida get beat up so badly, it’s because of the Maynard fight. I was this close to turning my dad into a MMA fan and Guida decided to just sh*t all over that. I’m still bitter. Mendes by absolutely dominating decision.

DJ Mark: It seems like the UFC is just keeping Chad busy in till he can get his deserved rematch with Jose Aldo. That’s not to say he can sleep on Guida here, but on paper/film/video games Mendes is just the better fighter of the two. Besides a complete and total mental meltdown I don’t see Chad losing this fight. Chad GnP TKO 1st round 4:12.

Lavender Gooms: “What was that? Mendes is fighting someone NOT named ALDO? Obviously going to smash Guida….Analysis? Nah not necessary, he’s easily the second best featherweight in the world.  No doubts in my mind he finishes the hairy sparkplug known as Clay Guida…Now stop asking me questions you’re interrupting Bridezillas”. Mendes by KO in 1st round.

Picking Mendes: All of us
Picking Guida: None of us are this stupid

Doctor Law: Ben Rothwell is still fighting? He’s also on TRT? Why the hell is Brandon Vera fighting at heavyweight? How long has Brandon Vera’s Facebook page been about crazy right wing sh*t? What the hell is the point of this fight? Brandon Vera by decision.

DJ Mark: When Vera first burst onto the scene he claimed he’d be the first active LHW and HW Champion. Now, several years removed, and Vera isn’t ranked in either division. Moving back up to HW seems like an odd choice but he’s facing a guy at a very similar level. Ben has not and probably will not ever really light the MMA world on fire and that’s okay because he’s a great HW journeyman, and there’s nothing wrong with that. This should be a really competitive fight and honestly I think it’s a coin toss for who’s going to win. I’m going with Ben here because I always count the guy out and I just got a feeling he might be able to pull it out. Ben by decision.

Lavender Gooms: This should be an easy victory for Brandon Vera.  Moving back to heavyweight means he should have a marked speed advantage over Mr. Rothwell.  He’ll utilize his speed along with his superior skills to control the center of the octagon and get the KO.  Vera by KO in 1st round.

Doctor Law: When I read that this fight was announced, my honest reaction was: “these guys didn’t fight already?”  Turns out they haven’t. Regardless, this is going to be a fun featherweight fight between young studs in the division. Both of these guys are coming off losses to fighters at the top of the weight class so a win here is important to get one of these back on track and closer to a title shot. I think Poirier is probably a little more well-rounded than Koch, but this should be a close one. Don’t let the ridiculous fake tan fool you, Koch is a very capable fighter. Sidenote, watch “Fightville” on Netflix. It’s a documentary about Poirier and his former gym. Poirer by 3rd round TKO.

DJ Mark: This is another close fight on paper. I’ve been impressed with Dustin but a couple set backs has hurt his standings and likely hood of getting a title shot any time soon. Erik was about to get a shot but injuries postponed his opportunity. I think whoever wins here gets put back into the picture but will still be a few fights away from getting a crack at Aldo. I’m leaning towards Poirier because overall I think he has the better skill set. Poirier by submission 2nd 3:30.

Lavender Gooms: Both of these young guns are coming off losses to top ten guys in the division (Poirier to Cub Swanson, Koch to Ricardo Lamas).  The advantage goes to Poirier in this fight, likely showing sharper striking and eventually ending this fight with blows on the ground.  Poirier by TKO in 2nd round.

Picking Poirier: All of us
Picking Koch: Sorry New Breed
By Doctor Law