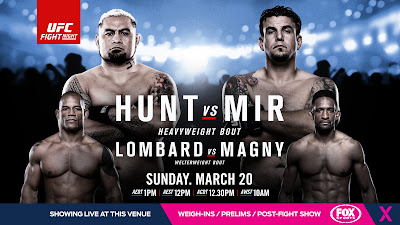 UFC is heading back down under to host what should be an exciting night of MMA action. Headlining the card is fan and It's MMAzing favorite Mark Hunt, who will be taking on former UFC Heavyweight Champion Frank Mir. Also, Neil Magny will clash with Hector Lombard in what should be a really fun match up. Personally, I'm really looking forward to the women's strawweight match between Bec Rawlings and South Korea's own Seohee Ham. In addition to those awesome match ups we'll see the likes of Jake Matthews, Dan Kelly, James Te-Huna and Antonio Carlos Junior.

This should be a really fun match up. Mostly because I don't know if Mark Hunt can really have a boring fight. On paper, just looking at the fighters skill sets and what they have been able to accomplish through out their careers it would seem like Frank Mir is a great foil to Mark Hunt's style. Not too long ago Mir was considered a submission master as even the most celebrated and skilled submission artist in MMA had to be weary about hitting the mat with Mir. However, recently Mir has chosen to engage his fights mostly in the stand up and clinch instead of bringing the fights to the mat where he's been so successful. If Mir decides to stand up with Hunt, or is unable to get him to the ground, he'll be in big trouble. Hunt has a knack for turning his fights into slugfests, mostly because Hunt isn't afraid to take a hit or two to get into the pocket. This in turn gives his opponents this false sense of security that maybe they can beat this guy at his own game. If Mir gets lured into this type of fight it's not going to go well for him. I debated back and forth about who to pick in this one, but ultimately I think Mir might just have too many miles on him and I don't think the traveling to Australia is going to benefit him either. Mark by KO 2nd round.


This is a really interesting match up. Magny is a very skilled and tactical fighter where Lombard, while also very skilled, can be a bit of a berserker when he really lets his hands fly. I think the key in this fight for Magny is to keep Lombard at bay by using Magny's reach advantage to keep Lombard on the outside. Lombard needs to get inside to land his big punches or engage Magny in the clinch. If Lombard can get in he has a great chance of doing some big damage and maybe even winning the fight. I'm banking on Magny being able to use his reach and footwork to stay out of range and drag Lombard into the later rounds where he's been know to slow down a bit. Magny by decision.

I have to be honest in this one, even though I've seen both guys fight multiple times, they just don't stick out in my mind. Which makes it hard to really break down the fight in technical terms, but it's a great opportunity for these guys to make a more lasting impression on me in this fight. Really just going off their records we have fairly young fighters with good records, both earning multiple wins within the UFC. Jake being the much younger fighter and also one who hasn't fought outside Australia or New Zealand I personally feel more confident in picking Johnny. He's had more fights and is on a fantastic 12 fight winning streak. Johnny by Decision.

I'm kind of a fan of Antonio Carlos Junior, but not really for the right reasons. Honestly it's mostly because Carl's Jr. is a popular fast food chain here on the west and I just find it funny when the commentary says stuff like 'Carlos Junior is turning up the heat now!' Well of course he is, these double cheese burgers aren't going to cook themselves. Aside from getting some giggles out of the commentary I also think Carlos Junior is a fairly talented fighter. In this fight I'm also leaning towards Carlos Junior because he's much younger and closer to his prime then Dan as Carlos Junior is12 years younger then Kelly. That being said, Dan Kelly is also a very talented fighter with a great record. I'm siding with youth in this one, but I won't be all that surprised if Kelly was able to pull out a win. Carlos Junior by decision.

While I don't consider either Te-Huna or Bosse to be top in their division, this should actually be a decent match regarding each fighters abilities. While I don't know too much about Bosse other then he use to be a hockey player, I've seen Te-Huna fight a number of times. Te-Huna is currently on a three fight losing streak, but I still think he's the favorite in this fight. Most of his losses have come to quality opponent;, opponents that I think brought more to the table then Bosse will. Te-Huna has been able to get wins over less skilled fighters and I think Bosse is within that realm. Te-Huna TKO 1st round.

I'm really looking forward to this one. Both Bec and Seohee are aggressive fighters that don't give an inch. Skill wise I think Bec might be a little better when it comes to getting the submissions, but I think Seohee is probably better at striking. I except it to be a gritty tough fight for both women with Seohee getting the nod in the end. Seohee by decision.