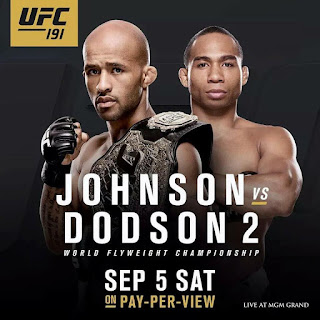 Finally, a legitimate challenge for Mighty Mouse. I don't buy it. Those of us who watched the first contest between Johnson and Dodson saw a hell of a fight between two of the three best flyweights in the world (I got Benavidez at #2). What we also saw was Mighty Mouse Johnson absolutely figuring out John Dodson's game during the last 3 rounds of the fight. Dodson is a head hunter and is possibly the fastest guy in the UFC. Unfortunately for him, Mighty Mouse learned his timing. Additionally, Dodson tends to fade as the fight goes on and Johnson's cardio is on a different planet. This fight will not be as competitive as the first, but you still get to see arguably the best fighter in the world work. Johnson by 4th round submission.

Old man heavyweights throwing down to determine who is getting the next shot at the heavyweight championship or Fedor. Read that sentence again. Heavyweight MMA in 2015 is f*cking weird. Frank Mir is coming off of back to back wins over Big Foot Silva and Todd Duffee where he showed much improved striking. Arlovski is 3-0 in his UFC run having knocked out Big Foot Silva (poor guy) and Travis Browne. I don't expect this one to last too long and I wouldn't be surprised if either man won, but as conductor of the Arlovski Title Shot train, I'm going with the Pitbull in this one. Arlovski by 1st round TKO.

Raise your hand if you thought Rumble Johnson was going to be forced to miss this fight over the yoga-throwing incident? Is your hand raised? If so, what's wrong with you? Do you think the UFC hates money? Anthony Johnson took the time in the past few month to make his own life very difficult. He's since been cleared (of what, I don't know) and is scheduled to throw down with Jimi Manuwa. Jimi doesn't wrestle and Rumble doesn't want to wrestle. Someone is going to sleep. I don't know why I'm being vague. Jimi Manuwa is going to sleep. Rumble by 1st round KO.

Picking Johnson: All of us
Picking Manuwa: We all like our yoga mats where they are, thank you very much.

Picking Blachowicz: All of us
Beastin' 25/8:

Why the f*ck is this on the main card? Don't get me wrong, I think Blachowicz and Corey Anderson are interesting prospects, but don't make me pay for this fight. I think Blachowicz is too polished to be defeated by Anderson. While athletic as hell, Anderson is still very raw and I wonder if understands what he's doing half of the time. He's almost like a like explosive OSP. Anderson also has the stupidest nickname in modern MMA. Blachowicz by decision.

Paige Van Zant said she wants to be built of slowly and I guess this follows that logic. Chambers is absolutely a step back from Felice Herrig in terms of notoriety, but she appears to be as skilled, if not more so based on her three octagon appearances. Kid Presentable said this a few weeks ago and it is absolutely at play in this fight: with women's MMA, you can make it pretty far on aggression alone. Paige is aggressive as hell. Additionally, she is from a great camp and is improving quickly. She gets the W here. 12 Gauge Paige by 2nd round TKO.

Picking Van Zant: All of us
Picking Chambers:
By Doctor Law