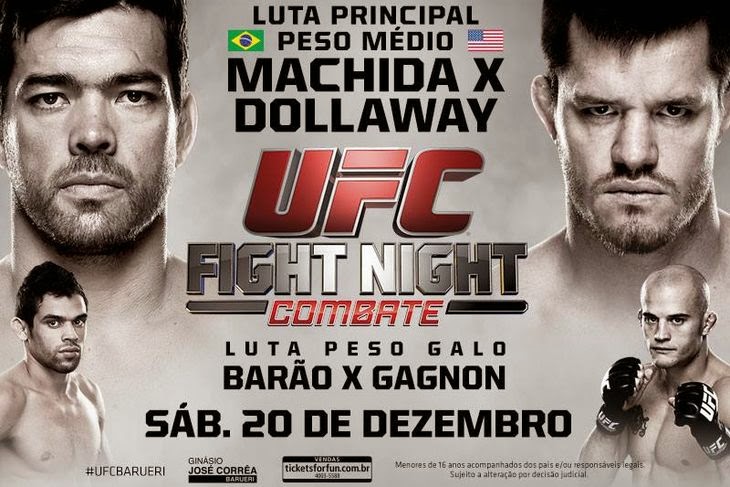 This Saturday, the UFC is presenting yet another Fox Sports 1 fight card in Brazil. Sadly, the card itself isn’t all that strong. Headlined by Lyoto vs Dollaway and co mained by Barao vs Gagnon, the quality of the fights pretty much ends there. There are a few notable names sprinkled throughout the rest of the card, but to be honest there isn’t too much here to get excited over. Even the main and co-main events are fairly one sided on paper and even amongst the It's MMAzing crew there was little argument about who we thought was going to win these fights. Never the less, some of these fights do have some ramifications in their respective weight classes and still deserve our attention.

On paper this is a big step up for C.B. Dollaway. This is easily the biggest fight of his career, but it’s much deserved as Dollaway has never looked better than in his most recent 4 of 5 winning streak. Even so, it’s still pretty difficult to imagine Dollaway coming away from this fight with the win. While Lyoto isn’t exactly the unbeatable machine so many may have thought during his best runs at Light Heavyweight, he’s still a highly skilled fighter who gives the vast majority of his opponents serious problems. Some have been able to steal rounds and fights away from Lyoto in the past, but very few of his losses came from taking a one sided beating or being completely outmatched. Dollaway has the difficult task of somehow finding a way to overcome the better striking/distancing that Lyoto will present to him. Personally, I don’t see how Dollaway is going to be able to put away Lyoto or even win a 5 round decision. I feel like Lyoto is going to be able to dictate the pacing of the fight and wait for Dollaway to make a mistake to capitalize on. Lyoto by 3rd round TKO.

While Gagnon holds an impressive 12 – 2 record and has won his last 4 fights, it’s still difficult to pick him over Barao. Even though Barao is coming off of the worst beating of his career and was unable to reach the scales for his rematch for the Bantamweight belt, I still think he’s the favorite in this fight. Once believed by many to be the pound for pound best fighter in the sport, he’s making his comeback in his home country against an opponent he should be able to beat. Gagnon is a great submission fighter but has yet to beat the bigger names in the UFC to convince me that he’s ready for a fighter the caliber of Barao. Also, I feel like Barao really needs to make a statement in this fight. He needs to not only win, but prove to everyone that he’s still the fighter we thought he was before he ran into T.J. Dillashaw. I think Barao gets it done on his feet, either knocking him out or hurting him enough to give him a submission opening. Barao by KO 1st round.


The Rest of the Main Card

Let’s be honest here, the rest of the main card is pretty weak. I’ll save us all some time by very quickly breaking down the rest of the card. We have Antônio Carlos Júnior vs Patrick Cummins. Many will remember Cummins for taking a very short notice fight against Daniel Cormier. I imagine very few people will recall that Antônio Carlos Júnior won the heavyweight portion of TUF Brazil 3. The It's MMAzing crew all think Cummings will get this one.

Cummings: DJ Mark with a K, Doctor Law and Kid Presentable
Junior: none

Elias Silverio vs Rashid Magomedov is a fight that is happening during this event. I’m tempted to just leave it at that but the truth is this one could be good. Both guys have good records and even have a name or two under there belts.

The next two fights feature somewhat notable fighters Erick Silva and Daniel Sarafian. Maybe this card won’t be as lackluster as my enthusiasm for it is. I think it’s getting a raw deal coming off a weekend that had two notable cards and a pretty big PPV just two weeks before this. Often cards that kinda fly under the radar can produce an awesome night of fights, but for right now, I’m coming in with fairly low expectations.
By DJ Mark with a "K"