Hail to the Chief....And to the King 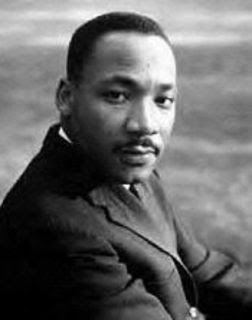 On this day that we swear in President Barack Obama for the second time we also celebrate the life of Martin Luther King Jr, a man who if not for his hard work and sacrifice, we very likely would be swearing in a different (and most  probably 100% white) guy.  While as a society we are not yet where we should be when it comes to racial relations and equality, ask any old black dude that lived in the 50s and 60s and they'll tell you we're much better off now than we were 50 years ago. But we still have much further to go.

So on this day we give thanks to Martin Luther King and so many others during the civil rights movement who sacrificed so much so that future generations could have a better chance for the American dream. Thanks to the King. And if you want to watch a funny Martin Luther King special today, watch the Boondocks MLK episode "Return of the King" on YouTube.  You won't be disappointed.

"I want young mean and young women who are not alive today to know and see that these new privileges and opportunities did not come without somebody suffering and sacrificing for them." Martin Luther King Jr.

Email ThisBlogThis!Share to TwitterShare to FacebookShare to Pinterest
Labels: Sure why not?