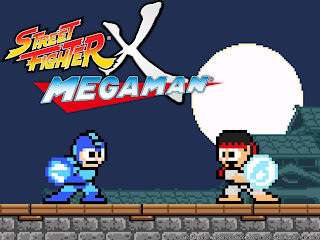 The definitive list of the top ten Street Fighter characters 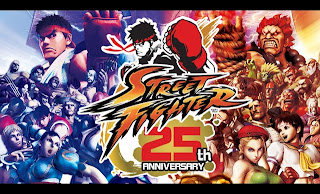 Capcom marks the 25th anniversary of their two most iconic franchises by releasing a free to download crossover game, Street Fighter X Mega Man, a game that pits everyone's favorite Blue Bomber against eight Street Fighters as bosses in a Robot Masters fashion. Mega Man was my favorite video game growing up and this could have easily have been a top ten Mega Man bosses post. But this is a MMA blog and we couldn't pass up an opportunity to argue back and forth and compile our list of the top ten Street Fighter characters. Because we all know that Ken, Ryu and Akuma would be 1,2 and 3 on 100% of your lists  we all agreed that to make this list more fun we would not include those three guys. 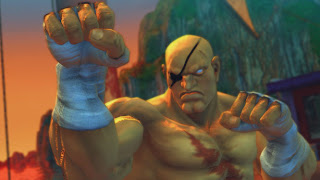 Hands down the best character in the franchise.  The original boss of the first Street Fighter. Sagat is just an all around bad ass.  With the missing eye (thanks to Go Hibiki, Dan's Father) and giant scar (thanks to Ryu) Sagat looks more bad ass than any other fighting game character. Best of all the skills match the looks, being the Emperor of Muay Thai, Sagat is as deadly as he is awesome looking. No one else in SF comes close to being as overall awesome and deadly as Sagat.  DJ Mark

2. Guile (with counter point for why Guile sucks and Charlie was better)
Guile was my first favorite Street Fighter character. I may have had a flat top inspired by Guile, he was just that cool.  His move set is pretty simple, I was never very good with him until I got older and learned how to set up combos.  While they tried to replace him in Alpha with his partner Charlie, Guile was always the better of the two.  Since he didn't really have a martial arts style I always considered him to be the true street fighter in the series. DJ Mark
﻿﻿
Counter Point for Charlie
I'm sure you're asking yourself "Why not Guile?". Because Guile sucks that's why.  Never liked that stupid blond flat top.  Could never get passed it.  Charlie's weird right angle styled hair was where it was at.  Don't get me wrong, I hate the moves for both these characters.  Having to wait two seconds to do every Sonic Boom and Flash Kick is just annoying.  Charlie was introduced as Guile's reason for revenge in SFII and made a playable character in Alpha.  Perhaps morbidly, I thought it was intriguing to know that when you did a play through with Charlie that his days were numbered and his fate was always to die and become Guile's undying singular driving force to avenge his fallen best friend and face Bison later on. Lavender Gooms

Ladies First to Chun-Li. Growing up, most all Asian females I knew would list Chun-Li as being one their favorites. She had the charge, spinning bird kick and the rapid fire leg kicks, but over the years she also developed an anti-air counter up kick, and even a projectile attack. No other fighter's move set evolved over the years the way Chun-Li's did, which always kept her at the forefront of female fighting characters, and often times could take the fight to any other in the game. And no matter how garbage the movie was, I attempted 4x to finish it, but just couldn't get through it, extra points go to Chun-Li for being played by the always gorgeous Kristin Kreuk. Kid Presentable

4. Sakura
I always enjoyed Sakura's lighthearted back story.  Self-taught girl who idolizes and mimics Ryu and wants to test her skills against him.  That's the kind of ambition we want from our young people! Ken would have been a better choice for idolization but Ryu was good enough so I'm not mad at her choice in hero worship.  When I used to run the arcades in the eighth grade I would just unleash her running dragon punch on unsuspecting chumps and play on for hours on one quarter. Lavender Gooms 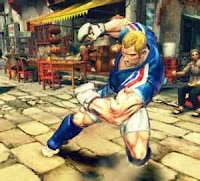 Street Fighter has often taken real martial artists as inspiration for their characters, that's why I think Abel is based off of the great Sambo/MMA fighter Fedor.  It might be a push comparing Tyson and Balrog or Bruce Lee and Fei Long but I still contest that given the time of SFIV and Fedor's popularity at the time that Abel is based off him.  In addition I really appreciated that SF finally threw a Sambo guy into the mix.  While it sucks that Abel doesn't have ground submissions he still has all the strikes and throws a Sambo master like Fedor would have.  Maybe in the next game we'll see a tall American Wrestler that throws spinning elbows, they can call him Don Mones. DJ Mark

6.Guy
Most kids of the 90's grew up on beat em up side scrollar games, and Final Fight was king of them. Final Fight featured Guy, the quiet bad ass in the red ninja outfit, wearing some Chuck Taylors. When he was finally introduced as a playable character in Alpha, I pretty much played as him exclusively. Another close range, combo type, Guy also introduced some new play dynamics like counter moves for positioning and more complex throws. Kid Presentable 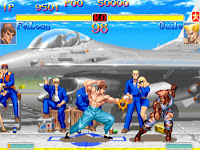 No fighting game is worth its salt unless it pays homage to Bruce Lee, and Capcom certainly did not strain their brain coming up with this one. All the classic yells, chirps, and howls of Bruce were present with Fei Long with his quick powerful combos. The Bruce Lee fandom growing up always made me want to get good at playing as Fei Long, but ultimately his lack of projectile attacks kept him from becoming one of my main go to guys. But for a speedy fighter that sets up good combos, few could match. Kid Presentable 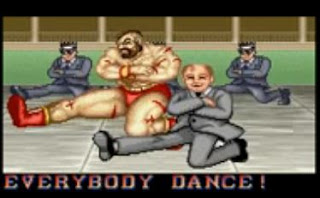 I am such a massive fan of Street Fighter that as a kid I bought all the strategy books not so much for the tips as it was for the art work for the game.  That's where I learned that Zangief was trained by wrestling bears.  That's so completely badass, and Russian! Combine that with his ending (where he dances with the head of the USSR) and you got a pretty awesome character.  Hopefully Capcom will make a wrestling game with Zangief and Mike Haggar (of Final Fight Fame) and we can finally find out who is Capcom's best wrestler and king of the mountaintop. DJ Mark 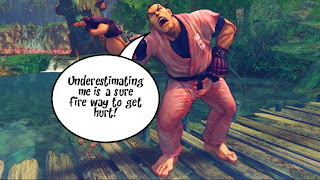 At first glance appears to be just another Ken/Ryu clone.  But he is much, much less than that.  Dan was literally the WORST character to play with in Street Fighter.  Weird costume colors (his default costume was pink!) and a "super" fireball that went about two inches in front of him.  The best part of playing with him was the ultimate shame someone would feel if they lost to someone who picked Dan.  At that point you just put the sticks down. Lavender Gooms 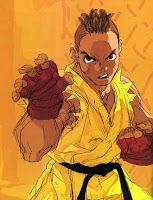 10. Sean
How can a MMA site have a top ten Street Fighter list and not include the one guy that uses double leg takedowns and ground n pound? What I always liked about Sean was that he was trying to mimic Ryu and Ken's style and came pretty close.  However he could only use Ryu/Ken's normal special moves as super moves.  Along with that I thought it was cool that he could also taunt by shooting a baskeball at his opponents. The short dreads are pretty cool too. DJ Mark

Geki
Some of you might be wondering who the hell is that? Well for you true old schoolers, you might remember that there is in fact a Street Fighter 1 game. Ryu and Ken were the only playable characters, and they had shoes on. Weird right? Well another weird thing about this game was how the programmers felt that you should absolutely not be able to beat it. The 4th opponent in the game was a ninja named Geki who had teleportation abilities. And when you are a kid, that is about as cool as it gets. That said, Geki is as far as I could ever get in this game. I would have him higher on this list, but due this being his one appearance in the series, his lack of longevity and flash in the pan run of dominance makes him just merely a notable. Kid Presentable 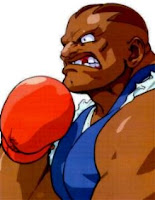 Barlrog
Was the first brother in the franchise so he had to get a mention.  This man was such a bad ass boxer that in a no holds barred tournament where there were no rules, people were hurling flaming balls of ki, there were dudes with metal claws flying from cages, this guy said "fuck it, I'll give these guys a handicap and fight with boxing gloves."  Power move to the 10th degree. Lavender Gooms