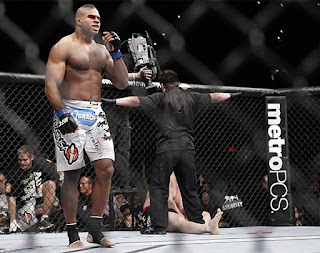 Hope everyone had an awesome New Year's Eve celebration, and cheers to making this last year on earth a good one. Kid Presentable here with a NYE hangover delayed edition of Post Fight Thoughts and Analysis. UFC 141 wrapped up the UFC's final event of the year, and boy did it create some major waves for the future of several divisions. A new heavyweight contender was crowned, while the long time #2 welterweight fell in spectacular fashion, and a new brash, middle-finger waving contender stepped out of his brother's shadow and into his own lime light.